Most local music scenes start innocently enough, at least they did before the existence of the internet. Case-in-point, Seattle, a small city that was often skipped by touring bands in the early ’80s. If you lived there then, you would often have to drive to either Portland or Vancouver B.C. to see your favorite band play live. Living there, I would have never expected to play a small part in a history that would end up being the subject of countless books, articles and documentary films.

I arrived in Seattle from California in June of 1981, with no sense of what my life would eventually become. I ended up playing in bands for almost a decade and stumbled rather fortuitously into the role of president for Seattle-based C/Z Records, a label that released music from loads of Pacific Northwest bands, including Soundgarden, Melvins, Built to Spill, 7 Year Bitch, The Gits, Green River, Hammerbox, Love Battery, the Presidents of the United States of America.

And even a little band named Nirvana.

Between the spring of 1983 and into 1984, during the brief but remarkable 11-month period that the now-legendary venue Metropolis was in existence, I saw a number of shows that changed my life. Big acts like Gun Club, Butthole Surfers, Bad Brains, Violent Femmes and The Replacements, but equally exhilarating were regional bands, the Wipers, U-Men, the Blackouts, the Altered, the Fastbacks, Poison Idea, Deranged Diction, the Accused and Room Nine.

The band that completely nailed me to the wall? The relatively short-lived 10 Minute Warning. I saw them several times in 1983, initially when singer Blaine Cook was still in the band. The band’s beginning was initially just a name-change for hardcore legends The Fartz. But before long, Paul Solger and Blaine Cook of The Fartz joined forces with Duff McKagan and Greg Gilmore from The Living and brought in David Garrigues as their new bass player. David was a furtive lanky skater kid who channeled his best Dennis Dunaway.

Gilmore was already the stuff of local legend; The Living was a band invariably mentioned with a tone of reverence (their 1982 record was recently released on Stone Gossard’s Loosegroove Records). Greg had a sense of rhythm that was clearly rooted in a punk rock aesthetic but with an approach that embodied the freedom of a jazz player.

The double-guitar assault of Paul Solger and McKagan provided a riff-driven immediacy that was raw and insistent. The collective impact of their sound was glorious and intense.

A few months into 1983, 10 Minute Warning gave Blaine the boot and brought in a new singer—Steve Verwolf—as a better fit for the direction that the band was consciously trying to move toward, a sound that was darker and more innovative, one that was less punk rock.

Steve was a larger-than-life psychedelic shaman type with the mesmerizing swagger of Jim Morrison but pulling more from the Motor City than from the sunny vibes of a late-60’s Laurel Canyon. He was not the best “singer” per se, but he possessed a dark and undeniable charisma.

The band was incendiary; They wore the punk DNA of bands like the Stooges, the MC5, and Johnny Thunders and the Heartbreakers proudly on their sleeves, but also the dark brooding of the Velvet Underground and a dense psychedelia uncharacteristic of punk-based bands in the early 1980s. Indeed, after opening for Black Flag in August of 1983, Henry Rollins referred to 10 Minute Warning as the “punk rock Hawkwind.”

Pearl Jam’s Gossard has famously been quoted as saying that it was 10 Minute Warning that inspired him to learn guitar. Can you imagine what grunge history would look like had Green River not existed? Green River was, after all, the progenitor to Mudhoney and Mother Love Bone who in turn spawned Pearl Jam.

“I think that almost every riff that Stone wrote during the first few years that I played with him was directly from Paul Solger,” Jeff Ament recently said of 10 Minute Warning. “It was like, ‘I’m just gonna change a note from this song, and that will become that song.’” A quick Google search will show that Paul is credited as a songwriter for Green River’s “Rehab Doll.”

Late in 1983, I was shocked to learn that both Duff and David had quit 10 Minute Warning. The band decided not to replace Duff, but would instead find a new bass player and continue as a four-piece.

I had gotten to know Steve and David and started hinting to Steve that perhaps I could get an audition as their bass player. Joining 10 Minute Warning seemed above my musical station, but I got a shot in January of 1984, and before I knew it, I was in. Our first show was in February at the Metropolis playing with Agent Orange and the Dicks. It was terrifying stuff, but completely exhilarating.

Around the same time, we booked our first session in the studio.

Between March and September of 1984, we recorded an album’s worth of material. By our final recording date, the cracks in the band had become severe, fueled primarily by insurmountable issues with drug addiction. Our rehearsals and performances had become unreliable and it was only a matter of time before everything fell apart.

We did finish the record before everything crumbled, and it captured beautifully the moment and the essence of the band in that last iteration.

In 2020, over three decades had passed since the record was tracked, and despite the fact that interest in Seattle rock history seemed to be at an all-time high, the album had never seen the light of day. So, beginning in September of 2020—during the course of the COVID lockdown—producer/musician Jack Endino painstakingly began remixing and mastering the recordings from the original multitrack tapes. His efforts shine.

The end result is This Could be Heaven—The Lost 1984 Recordings, 10 songs that meld the raw power of Iggy and the Stooges with edgy garage-pop song structures. C/Z Records has been effectively resurrected in order to release a limited vinyl edition of the 10 Minute Warning recordings. This Could be Heaven captures a critical moment in Seattle’s musical history. Things were just beginning to shift, but at a juncture when none of us had any idea of the seismic events that were going to change the course of music history across the globe. 10 Minute Warning is rarely included as a popular part of Seattle music’s storied history, but for those of us who lived and played there, we understand they were a band that bridged the transition between punk and the grunge explosion. They might just be the missing link. Now, 37 years after the fact, This Could be Heaven offers the world a chance to see what influenced Seattle’s ’90s influencers. 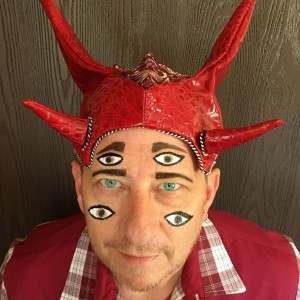