The War on Drugs’ latest album opens with somewhat of a feint. Littered with sparse piano and soft guitar, “Living Proof” is among the quietest songs in the Philadelphia band’s expansive catalog. 2014’s Lost in the Dream opened with the resplendent “Under the Pressure,” and 2017’s A Deeper Understanding had the immediacy of “Up All Night.” The heartland rockers’ fifth record, however, introduces itself gently, opting for restraint rather than full-blown grandeur. Toward its end, “Living Proof” recedes into itself, like a gravitational pull into the distant horizon. Then, the locomotive pace of “Harmonia’s Dream” kicks in. This is all an exercise in tension and release, and the rest of that record is the release that “Living Proof” leaves you yearning for.

Produced by frontman Adam Granduciel and Shawn Everett (Alabama Shakes, Perfume Genius), I Don’t Live Here Anymore is The War on Drugs’ poppiest, most bombastic work yet. It’s laden with enormous synth hooks and bona fide stadium rockers that evoke Bruce Springsteen’s Born in the U.S.A. era. It stands in stark contrast to the band’s earlier work, such as Wagonwheel Blues and Slave Ambient. For the most part, it’s a continuation of the path they paved on their last LP, A Deeper Understanding. But the songs aim for higher heights that directly invite you into their orbit. I Don’t Live Here Anymore captures The War on Drugs’ thrilling camaraderie at its apogee. 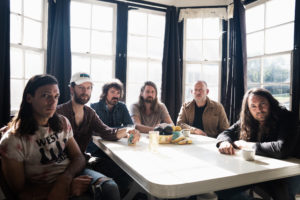 Granduciel’s lyricism is more pointed this time around, and his major motifs often revolve around defying insurmountable odds and forging meaningful companionships. “I’ve been running from the white light / Just trying to get to you / Tell me everything that you need,” he sings on “Change,” holding out the final syllable to reflect his strife. On the title track, he nearly chants alongside Lucius’ backing vocals, “I wanna find out everything I need to know / I’m gonna say everything I need to say.” Dr. Dog’s Eric Slick provides a triumphant, percussive backbone with the band’s own Charlie Hall, and Robbie Bennett’s synth and guitar performances complement Granduciel’s arena-sized hook. It makes for one of the band’s best songs to date. 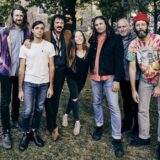 In the same song, Granduciel draws an allusion to Bob Dylan’s “Desolation Row,” a shrewd acknowledgment of how The War on Drugs draws from the rock canon while firmly cementing themselves within it. He contributed to The Rolling Stones’ Goats Head Soup reissue, and he even named his son Bruce after you-know-who. Though Granduciel seldom references his own fatherhood, he occasionally ruminates on his childhood and his father. “Working my whole life to follow my father’s dream,” he mutters on “Old Skin.” “Rings around my father’s eyes / Light above the morning sea / Fill the crater of the sun / Feel the wings across your arms,” Granduciel sings on the acoustic ballad “Rings Around My Father’s Eyes.”

Though this band generally refines upon the sound they’ve already built, they sometimes delve into untrodden territory. “Victim” is built almost entirely on synthesizers and drum machines, an unusual endeavor for a band so heavily associated with ripping guitar solos. Still, it works on all levels; it’s a track that gradually adds layer upon layer until it overwhelms itself, dissolving into the cosmos.

Another shift that longtime fans may notice is the pure absence of interludes. Lost in the Dream sprinkled them throughout the tracklist, and A Deeper Understanding often incorporated them into the songs themselves. I Don’t Live Here Anymore, on the other hand, dispenses with them completely. It’s a welcome change that makes the record more succinct. Although it was enjoyable to hear The War on Drugs meander into a sonic rabbit hole every now and then, the songs on I Don’t Live Here Anymore never feel superfluous; it’s a record that very much serves the songs at hand, and they benefit from this increased focus.

Throughout I Don’t Live Here Anymore, Granduciel utters the phrase, “I don’t wanna change.” It’s a recurring leitmotif that underlies the album, and though the heartland rocker is so apprehensive of becoming someone he’s not, The War on Drugs proves that they’re the band they’ve always been. But, this time around, they distill these songs down to their purest essence, and it’s the perfect showcase for why people have been enamored with this band since Wagonwheel Blues. As Granduciel says himself on “Harmonia’s Dream,” “sometimes forwards is the only way back.”