If you’ve watched televised sports since late May, you’ve heard Solemn Brigham rap. His energetic southern voice soundtracks a Gatorade commercial that runs more often than Sydney McLaughlin and the ad’s other athletes. Every rerun finds you anticipating the North Carolinian’s relaxed yet forceful slant rhymes from “Future Power Sources”: “I been on my get back, cop a bag slow / You would never see that, use the trap door.”

Gatorade selected the song from 2020’s Marlowe 2, Brigham’s second album with producer and fellow North Carolinian L’Orange under the Marlowe moniker. Following the first air-date, he’s fielded countless calls and texts of support. Though appreciative, he remembers when few called.

“People never see the work you put in before you’re visible,” Brigham says via phone, unintentionally echoing the lyric from “Future Power Sources.” Today, he’s moving around Wilmington, NC, where he’s lived since his brief stint at the University of North Carolina Wilmington, preparing for Marlowe’s fall UK tour and the release of his solo debut, South Sinner Street. “Nobody saw the decade I spent struggling to survive.” 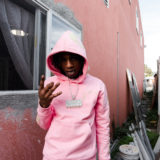 That decade and the years that preceded it provide the non-linear narrative arc of South Sinner Street. Listen closely and you can watch the six-year-old Brigham who searched for his intoxicated father at local juke joints (“Kingville”) become the hustler taking out-of-town trips (“Country trap, I ran the map and damn near hit a deer,” “Dirty Whip”). Brigham raps with the same unflagging verve of classicist-leaning Marlowe albums that were short on his biography but brimming with unbridled technical ability. While he’s still capable of contorting syllables with acrobatic flair, he also slows down to offer penitent reflections on unglorified dirt: “My youngin’ claim I’m his hero, he say I look like a perp / I put my dream on defer” (“Vice North”). The shifts in delivery and timeline jumps are reflected in production that ranges from slamming and funky to twisted, quasi-psychedelic menace without losing its southern bent. If South Sinner Street ever sounds slightly jarring, that was intentional.

“I wanted South Sinner Street to sound raw. It’s not a clean album. And I didn’t want it to be clean because there’s nothing clean about South Center [Street],” Brigham says, explaining his titular flip of the main drag from his hometown of Albemarle. “When I think about that place there is a lot of anger and a lot of resentment. But you also gotta understand this is where I was born, where I learned how to ride a bike and fought for my first bike…. I got my first lessons in Albemarle.”

In conversation, Brigham recalls his childhood in the small “dirt town” with the same polarizing fondness and frustration that makes South Sinner Street so engaging. Backyard barbecues of endless summer days are warm memories, but they coexist with the chill of watching drugs ravage the community. During his preteens, Brigham’s mother moved him and his two older sisters to nearby Hamlet, though he returned to Albemarle to visit his father, a blue-collar worker fond of The Gap Band and gospel. When his father passed away, there were few reasons to return.

Brigham absorbed his mother’s love of rap in Hamlet. She played Rakim and Run DMC, New York artists she’d heard growing up in Staten Island, while he gravitated towards southern rappers like Webbie and Slim Thug. Though he freestyled with his classmates in PE class, Brigham didn’t foresee a rap career. During his final year at Richmond Senior High, he was earning college credits and working after school. That studiousness faded when Brigham rekindled his love of rap at UNC Wilmington. He skipped classes to read rap blogs and freestyle to beats from local producers like L’Orange.

“I really dedicated myself to rap, and it was one of the worst things I could’ve done,” Brigham says, chuckling at his hubristic decision to drop out. “I was immediately thrust into poverty. And you have to make some decisions about how you’re going to make money.”

To support himself, Brigham sold everything from cutlery to vacuums, worked at Taco Bell and Walmart. Hustling came with potentially fatal and carceral risks, but the money and freedom it offered outweighed them. He freestyled in his car whenever he worked, forever keeping his dream alive while watching the years slip away. By the time L’Orange called him to work on a song for his 2017 album The Ordinary Man, Brigham had nearly caught cases several times. After evading prison, after being robbed and snitched on, he jumped at the chance to finally pursue his deferred rap career.

“When we first started, he was extremely talented but was also very green. As we’ve gone on, he’s grown so much in terms of his songwriting, voice control, and emotional content,” L’Orange says of Brigham’s growth from The Ordinary Man to both Marlowe albums and South Sinner Street, which features several of L’Orange’s beats. “I think it’s important that as he got further into his music, he opened up. He had so much talent and energy that I felt the only thing I wanted to produce for him was his willingness to create an intimate connection with people.”

South Sinner Street realizes that end. Brigham connects with one vulnerable, memoiristic line at a time. Though his past is still close, his passion for rap and gratitude for every career win shines through.

“I never even thought I’d have a passport. There were times in my life where I thought a huge chunk of it was going to be gone,” Brigham says. “And now to actually have a passport and be flying overseas is like a fairy tale.”