Old Dominion lead vocalist Matthew Ramsey calls from Los Angeles, where his band just played on Jimmy Kimmel Live! to promote Time, Tequila & Therapy, their fourth studio album. Although they’re one of the more successful acts to emerge from Nashville in the past decade and achieved multi-platinum sales for their previous three albums, Ramsey admits they still aren’t quite comfortable with their status in the country world.

“I still feel like someone who doesn’t belong at the party — I feel like I’ve snuck in,” Ramsey says. “I think we all feel like that as a band, sometimes. We’re just waiting for somebody to tap us on the shoulder and say, ‘Guys, how did you get in? You’re not supposed to be here.’ When that happens, we’ll be like, ‘Oh, you’re right — sorry,’ and we’ll leave.”

This scenario seems unlikely though, given that Old Dominion’s new single, “I Was on a Boat That Day,” has already reached the Top 10 on multiple charts in the U.S. and Canada. The single’s success isn’t surprising either, as it keeps them on track to continue the commercial success they’ve enjoyed since their 2015 debut album, Meat and Candy.

Time, Tequila & Therapy was an “experiment” according to Ramsey. Normally based in Nashville, the band decamped to Echo Mountain Recording in Asheville, North Carolina for what they thought would be a laid-back writing and recording session. 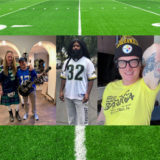 “There was no plan to make an album,” Ramsey says. “We brought no songs with us to the studio. We purposely said, ‘Let’s just sit down with a blank page and see what comes out, and maybe we’ll get three or four songs.’”

Instead, they ended up with the thirteen tracks that made it onto this new album. While it might not have been expected, it’s also what Ramsey has come to kind of expect with his bandmates — multi-instrumentalist Trevor Rosen, lead guitarist Brad Tursi, bassist Geoff Sprung and drummer Whit Sellers. Ramsey credits their chemistry as both friends and musicians for their success. They all grew up in Virginia, where some of them started playing music together as far back as 20 years ago. Then they each independently moved to Nashville, where they met up again and formed Old Dominion in 2007.

Once they got rolling, the success came pouring in. Their debut single, 2015’s “Break Up With Him,” went platinum, and they’ve repeated that feat several times since with singles such as “Snapback,” “Song for Another Time,” “Hotel Key,” and “One Man Band.”

A big part of Old Dominion’s appeal also stems from their relatable lyrics — and while this part of songwriting is often the lead singer’s domain, Ramsey shares this duty equally with the other members. As for his own songwriting, the vocalist has a clear mission.

“Personally, I am always trying to be as somehow simply poetic as possible,” he says. “I’m interested in that human experience of being happy and sad at the same time, and I think everyone feels that. So if I can grab a little of that and put it in a song, then I feel like maybe that’s what people are responding to.

“When I was at a young age, I remember just crying to ‘Eye in the Sky’ by the Alan Parsons Project,” he adds. “I remember my parents asking me if I was okay, and I was like, ‘Yeah, I don’t know why I’m crying.’ It’s not an emotional song, but there was something in the melody that hit me. It has that inherent sort of sadness that struck me as powerful. It really made me interested in exploring music and how it could make me feel that way.”

Another moment cemented Ramsey’s certainty that he was destined for a music career.

“My first concert was Huey Lewis and the News. And when I saw an arena full of people and the joy that was happening because of the music, that was when I thought, ‘This is me. This is what I want to do. I want to be this person that can bring that much joy into a room.’”