Moor Mother Time Travels Through Black Encyclopedia of the Air

On her fifth album, Black Encyclopedia of the Air, Camae Ayewa (better known as Moor Mother) paints a world where time is broken, a shifting wasteland where she explores issues of violence and identity on a generational scale. This catastrophe is a familiar setting for the Philadelphia artist, who blends her poetry and music in a way that harkens back to the proto-rap of Gil Scott-Heron, but also meshes with the avant-garde quality of contemporary hip hop. But genre, like time, is transcended and shattered within Ayewa’s body of work.

Her debut LP, 2016’s Fetish Bones, blended growling synths and overbearing static with paper-thin gospel samples and the haunting chant of chain gang songs — and ever since, Ayewa’s music has combined the old and new in ways that blur the difference between them. Her method reflects an Afrofuturist perspective, in which it is necessary for Black people to find new relationships with time in order to connect with lost histories and possible futures that normative reality has (by design) denied them. Ayewa also explores this ideology through her multimedia collaboration with fellow Philly artist Rasheedah Phillips, who features on Black Encyclopedia under their duo name Black Quantum Futurism.

On Fetish Bones and its 2019 follow-up Analog Fluids of Sonic Black Holes, this achronological view reveals a country scarred by racist violence. Ayewa brings expressive gestures from noise and punk rock to craft abrasive soundscapes, over which she delivers urgent poems chronicling horrors from the Middle Passage to the Vietnam War. In these readings, Ayewa treats her voice as another brash instrument, often distorting and mixing her vocals deep within the grainy instrumentals.

On Black Encyclopedia, however, Ayewa opts for slighter gestures. Most of the album keeps a coherent structure of verses and choruses, showcasing a spread of avant-garde rappers featured throughout the album. In 2020, Ayewa released a collaborative album with billy woods, the versatile lyricist who makes up half of left-field rap act Armand Hammer. Elucid, the duo’s other half, delivers a foreboding verse on opener “Mangrove.” The album’s production also settles into more coherent beats, a more richly-textured take on the sparse, sample-based sounds favored by underground artists like Navy Blue, MIKE, and featured artist Pink Siifu, who flows hectically over the creeping funk of “Obsidian.” 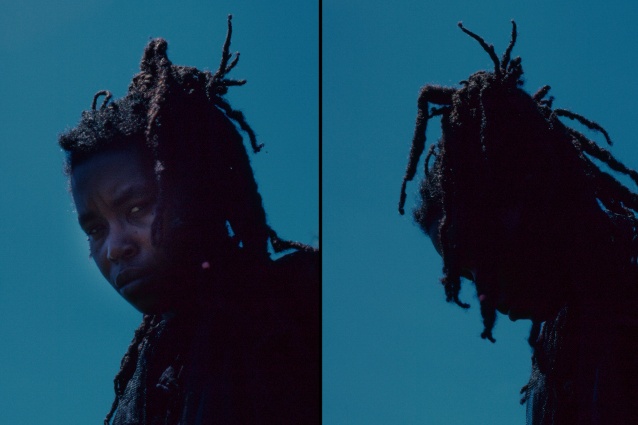 Throughout the album, the structural violence which Ayewa regularly confronts in her work returns as a mythical evil: ghosts in ancestral stories and night terrors in her verses, dissonant melodies and rattling percussion in her instrumentals. On “Temporal Control of Light Echoes,” the reverberating monologue introducing the album’s ephemeral setting, she closes by proclaiming, “This place is a gathering of bones.” Keeping with her nonlinear view of time, however, the project’s proximity with death also invokes histories of survival and resistance; on “Made a Circle” with Nappy Nina, Maassai, Antonia Gabriela, and Orion Sun, Ayewa channels a protective ward through generations of mothers, sisters, and daughters.

Though one of her most conventional projects to date, Black Encyclopedia of the Air adheres to the radical tenets which defined Ayewa’s prior genre-defying work. On “Tarot,” its most freeform track, Ayewa slips into a lengthy poem backed by vocals from YATTA of New York collective Purple Tape Pedigree, expounding on cosmic and political tangents. “Blackface democracy,” she intones over an atmospheric blend of flutes and triangles. “Slave House senate, Outhouse prime minister.” The disorder of the song digs at the hierarchies it addresses, painting them as perverse and unsound.

Within rap music, Ayewa searches for a new balance between her political messaging and experimental production, finding ample company in a like-minded underground scene. Together, they create a new vision for what hip hop can be, prioritizing the Black cultural needs which motivated the genre’s invention.