Taylor Cameron Upsahl (A.K.A. Upsahl) is only 22, but she’s co-written some of the buzziest songs in pop, including “Good in Bed” for Dua Lipa and “Boyshit” for Madison Beer. Now, the Phoenix, Arizona-native is releasing her own debut indie-pop album, Lady Jesus, which arrives October 8 via Arista Records.

In 2020, Upsahl released her first EP, Young Life Crisis. You also might have heard her song “Drugs” on TikTok. During the pandemic, it went viral and was used in more than 2 million videos.

In celebration of the record, she will host an event for its release including a front-to-back performance of the album on October 7 at the Pico Union Project in Los Angeles. Fans can tune into the event via a live stream on her YouTube channel. 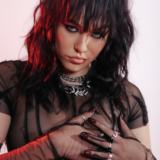 Upsahl is set to perform her first-ever headline concert at the Courtyard Theatre in London on October 12, and another at Rickshaw Stop in San Francisco on November 30. The singer is also opening for Olivia O’Brien on a fall U.S. tour.