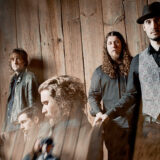 Radiating a soulful, modern Beatles, the video is embellished with neon collages and pop art swirling in and around the band as they jam. The jagged guitar riff brings a classic rock feel intertwined with the video’s heady rainbow flair.

“‘Love Love Love’ is trying to steer the ship away from everything I’m talking about in ‘Regularly Scheduled Programming,’ and speak toward positivity and pure love,” frontman Jim James said. “Finding truth within yourself and in the world around you.”

The mesmerizing video was directed by George Mays with animation done by Mero. Their self-titled upcoming album is set to arrive on October 22 on ATO Records.

This follows the release of the first track off the anticipated album, “Regularly Scheduled Programming.”

The eclectic rock group’s last music was the 2015 Grammy-nominated The Waterfall. The band will embark on their first U.S. headlining tour in six years this month. My Morning Jacket is returning to the stage with highlight shows at Seattle’s Paramount Theater (October 1-2), Chicago’s Auditorium Theatre (November 4-6), and a New Year’s run at Denver’s Mission Ballroom (December 29-31).

Check out the tracklisting and My Morning Jacket’s tour dates below:

Regularly Scheduled Programming
Love Love Love
In Color
Least Expected
Never In The Real World
The Devil’s In The Details
Lucky To Be Alive
Complex
Out Of Range, Pt. 2
Penny For Your Thoughts
I Never Could Get Enough