When COVID-19 hit the United States in early 2020, it caused an unprecedented shutdown of the live music industry that continued long after most other sectors of the economy had reopened. As the vaccine rollout gained steam over the first half of 2021, and new cases and hospitalizations trended downward, music lovers began to feel like they could finally make out a smidge of light at the end of a very long, dark tunnel. Tours were booked, venues did away with capacity restrictions as local laws allowed, and a head-spinning number of festival lineups were announced. Many began to believe the worst was behind us.

Then the Delta variant made itself known, and it felt like we were sliding back into the pandemic. As the weather turns colder while medical resources are stretched to the limits in many parts of the country, there’s ample reason to continue to take precaution.

So where does that leave live music in terms of safety?

In a word: Complicated. 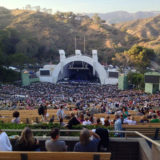 Vaccinated individuals are still much more protected from the virus than the unvaccinated, but breakthrough cases can and do happen, particularly when unmasked people are clustered together in an indoor room without proper ventilation (which might just sound like a clinical description of the best show of your life). While some parts of the country are currently hit harder by Delta than others — especially southern states including Texas and Florida — we’ve all learned during this pandemic that any present reality is subject to change without notice. In response to the surge in cases and concerns about waning efficacy, U.S. officials recently approved Pfizer booster shots for 20 million adults (for those over 65, living with certain health conditions, or employed as a front line worker), and more booster approvals for Pfizer and Moderna recipients are expected in the months to come. Barring a new round of regional lockdowns, it doesn’t look like venues will be shuttering en masse again in the near future. For many, another prolonged closure could become permanent this time around.

Audrey Fix Schaefer, who serves as the VP of the Board of Directors and Communications Director for the National Independent Venue Association (NIVA) and works as the communications director for Washington D.C. concert production company I.M.P. (which manages the 9:30 Club and the Lincoln Theatre, among others) estimates that about 300 NIVA members — including independent venues, promoters, and festivals — have shut down permanently since the organization formed in April 2020.

“The reason why there aren’t more that have gone under is because we did form, and together we were fighting for this emergency relief,” she says. “People were doing things to try to hold on — draining their 401(k)s, taking money out of their kids’ college funds, refinancing their mortgages, that kind of thing — until that relief arrived.”

With so much on the line in terms of public health, business, and the cultural life of their communities, it might come as no surprise that independent venue operators have stepped up their game to try to make live music safer. Some clubs are sticking exclusively to outdoor shows for as long as they can. Many have announced new policies such as on-site masking requirements or proof of vaccination and/or a negative COVID-19 test at entry. At times, they’ve acted even before state and local governments updated their own masking recommendations and mandates.

“Gabe Pollack, who runs a nonprofit jazz club in Cleveland called the Bop Stop, pointed out that last March, the government stepped in and shut us down,” Cindy Barber, co-owner of Cleveland’s Beachland Ballroom, says. “It wasn’t comfortable, but it was the law and we had to react — but we didn’t bear the burden of deciding. Now, with the government basically refusing to go through another shutdown, business owners are left making these decisions and enforcing policies and the stress is getting to us all.”

Despite the stress, Barber says that the public response to her venue’s COVID-19 safety policies — as a part of the Northeast Ohio Coalition of Venues and Theaters they require proof of vaccination or a negative COVID-19 test within 48 hours of entry — has been largely positive, with some patrons saying they make them feel safer coming out to shows. Others have called the venue managers “Nazis” on social media channels and vowed to never step foot in the club again.

“[This] seems to be the case at venues across the country, based on the NIVA town hall meeting I was on last week,” Barber says. “But we are all trying to explain that we need to create some policy so that we can try to stay open and keep staff, guests and artists safe right now.”

Ohio is one of many states where Republican governors and/or legislatures have attempted to make it harder or illegal for local authorities to impose public health measures related to the pandemic. Some have succeeded, at least for now.

Fortunately, that’s not the case everywhere. In August, New York City became the first major U.S. city to announce that it would require proof of at least one COVID vaccine shot for indoor dining, gyms, and performance spaces. For local independent venues, that move reinforced or strengthened their own policies and helped take away the pressure of having to deal with confrontational guests and artists. Alex Holden, the general manager of Brooklyn’s Union Pool, says that his venue has only had one artist cancel due to their anti-vaccination views since the mandate was announced.

Union Pool manager Anna Paz Lopez, who also works at experimental rock label Temporary Residence Limited, suggests that city-wide regulations such as New York’s may have a ripple effect on show safety. Musicians may take local masking guidelines and vaccination levels into account when planning tours to reduce their own risk of exposure.

“I feel confident working at a venue that requires proof of vaccination in a high-vax city and I can see musicians making similar decisions with routing,” she says.

And indeed, some touring musicians are already doing just that. Others are creating their own COVID protocols for themselves and their crews, or requiring masks or proof of vaccination at their shows beyond what the venues mandate. Abbey Simmons, who worked as a tour manager and merchandise manager for more than a decade before the pandemic, recently returned to the road as the merchandise manager for Sleater-Kinney on their summer tour with Wilco and Nnamdï. Simmons says that everyone in Sleater-Kinney’s group of 18 was required to be vaccinated before the tour and agree to be tested weekly and after days off. They also had to agree that if they ever tested positive, they’d stay behind in a city and quarantine before making their way home. The group also followed extensive day-to-day precautions throughout the tour.

“As the merchandise manager, I didn’t [sell merchandise] to limit exposure and contact with the crowd, and that was true for Wilco and Nnamdï’s [crew members] as well,” Simmons says. “We wore masks at all times, except when on our tour buses and in hotel rooms. I wore an N95 mask whenever dealing with local crew or staff at a venue. Our day-off activities were limited to outdoor only — no dining indoors, no movies or museums — and we were not allowed to have guests at our hotels, on the buses or backstage. If family or friends did come to a show, they had to do a rapid test.”

At the end of the tour, it was clear that their commitment paid off. On August 27, Simmons tweeted “I was told at the start of this tour, it would be not ‘if’ but ‘when’ for getting covid. Tomorrow is our last show and not a single positive in a 40 plus person touring party. Has it been hard work? Absolutely. Worth it to keep working? Absofuckinglutely.”

Though Sleater-Kinney and Wilco limited their tour to outdoor venues, Simmons says that the success of the run combined with new venue policies have made her feel more hopeful about live music going forward. She’s already contracted to work as a merchandise manager for a band on their November-December tour.

“In terms of what venues can do about making bands and crew feel safe, I would say that following their own guidelines of masking and not being verbally or visibly angry about it would go a long way to making me feel more comfortable,” she says.

That message is not lost on any of the independent venue managers we spoke to. “When you rely on touring bands, the bands need it to be safe everywhere for them to get out on the road. They need to stay safe and they want their fans to stay safe,” Schaefer says.

The heightened need for health precautions in venues has opened the door for new solutions. On September 14, NIVA announced a new partnership with Bindle, a digital software vendor whose software platform allows concertgoers, venue staff, touring artists and crew members to store their vaccination and COVID test records while also creating entry passes that comply with venue safety requirements. It’s HIPAA-compliant, fraud-resistant, and gives venues the option to adjust their requirements based on their own policy decision or local health recommendations and mandates. It’s also free for users and affordable for the small businesses (1,000-10,000 entries per month costs the venue $0.15 per entry). Bindle co-founder and CEO Gus Warren says that they already have more than 140 NIVA and non-NIVA partners on board with the program, and he anticipates hundreds more in the weeks to come.

Sadly, as much as any venue can do to mitigate the risk of people contracting COVID in their establishments, no policy or action is going to be 100% foolproof when you’re battling science itself. Lopez noted that a recent show at a New York venue resulted in several breakthrough cases (despite the venue requiring proof of vaccination), and a slew of artists including Neko Case, Ministry, and Modern English have canceled or postponed tour dates in recent weeks due to safety concerns or band members testing positive for COVID.

Just as venue managers need to constantly keep on top of local case numbers and hospitalizations to readdress their protocols accordingly until COVID-19 is a distant memory, fans need to follow house rules, and — as they would before entering any other place of business — assess their comfort level based on the circumstances at hand and make the decision to attend a show or not accordingly. There are plenty of ways to continue to support independent music venues and your favorite artists that don’t require you to venture inside the venues themselves, from buying artist and club merch to watching live streams (and donating to the band). Of course, fans can also stick to widely spaced outdoor shows and commit to wearing a mask while supporting NIVA campaigns and local event and hospitality initiatives as they arise. Other than those exempt by age restrictions or certain medical conditions, anyone interested in seeing live music should get vaccinated and put an alert on their calendar for when they are due for their booster — and those who do make it out should tip their bartenders heavily.