This article was originally published in the May 1985 issue of SPIN. In light of Perry’s death, we’re republishing it here.

When people said to Bob Marley that his friend Lee “Scratch” Perry was mad, Marley would reply, “Him not mad, him just Scratch.”

They were not always persuaded. Indeed, one of Mr. Perry’s several epithets is “The Mad Scientist,” which took on its true meaning when he trashed his Black Art recording studios in Kingston, Jamaica, and spent several months planting small black crosses on every available square inch of his property. He also changed his name to Pipecock Jackson for a short time and for no apparent reason. 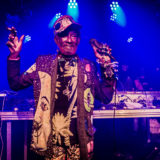 We are squashed together in the tiny back room of a North London record shop, drinking cooking sherry. “My brain that I make records from,” he continues, “is real mad. Mad in love, not in destruction. Positive madness. Love madness. All of my best records I make when I am mad with positive love. The things people are afraid of, that is what I want.”

Scratch earned his nickname from the title of the records (precursors to today’s scratch DJs) which he produced in the ’60s. A tiny, wiry Jamaican with mad, wise eyes, he was a mentor to Marley and the brainpower behind such reggae greats as Junior Murvin, Max Romeo and The Congos, whom he worked with in the mid ’70s. His personal repertoire includes celebrated instrumental albums such as Double Seven.

Recently, Scratch left Jamaica and moved to London. He is talking with Paul McCartney, whom he worked with during the mid ’70s in Kingston, about a possible project. He recently released History, Mystery and Prophesy on his own in Britain, because Island mysteriously declined to, although they distributed it here on their Mango label. Upset though he is, he says there are more important things than material success.

Ah. That explains everything.