For 58 years, Charlie Watts manned the drum kit behind Mick Jagger and Keith Richards, the unflappable bedrock of the Rolling Stones sound. Compared to his British Invasion contemporaries, he wasn’t a bombastic virtuoso like Keith Moon, and a gregarious personality didn’t shine through his playing like Ringo Starr. Instead, Watts was a drummer’s drummer, always in the pocket, always finding the perfect fill to serve the song. With his dapper suits and knowing smile, he was the mysterious one who gave few interviews and famously listened to more jazz than rock’n’roll. But he was central to the band’s sound, and as a visual artist sometimes designed record sleeves and tour stages.

Earlier this month, the Rolling Stones announced that Watts would sit out the remaining dates of the No Filter Tour resuming this fall, and it would be the first Stones tour ever with a different drummer (Steve Jordan is set to replace Watts). On Tuesday, Watts passed away in a London hospital, “surrounded by his family” per the band’s official statement. In remembrance of one of rock’s most essential drummers, here are 10 of Charlie Watts’s best tracks with the Rolling Stones. 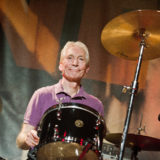 Early rock drummers were often ill-served by a recording industry that didn’t really know how to present the noise they were making yet, Charlie Watts included. The original mono mixes of the Stones’ first few albums sometimes reduce Watts’s kit to a faint tapping, even occasionally drowned out by Mick Jagger’s offbeat tambourine. But the band’s first two No. 1 hits in America, “Satisfaction” and “Get Off of My Cloud,” found producer Andrew Loog Oldham figuring out how to really present the Stones’ propulsive rhythm section. On the latter, Watts’s rat-a-tat 16th note snare drum pattern gives the verses an insistent pulse almost as hooky as the chorus.

Between the Buttons is arguably the only Rolling Stones album where Charlie Watts is the most prominent face in the cover photo, and he drew a comic that appeared on the inner sleeve. His best performance on the album is “Miss Amanda Jones,” with frequent tom-tom rolls backing some of Keith Richards and Brian Jones’s scuzziest guitar tones of the era.

At the time, “She’s a Rainbow” was a minor hit, peaking at No. 25 on the Hot 100, from the band’s most divisive ‘60s album, the psychedelic misfire Their Satanic Majesties Request. But it’s probably the Rolling Stones song that has grown in stature over the past decade. It keeps popping up in films and commercials and heck, it was just a major plot point in last week’s episode of Ted Lasso. It’s also the Stones’ best attempt at the kind of sweet, starry-eyed love song that the Beatles cranked out more effortlessly, and the urgent Charlie Watts shuffle driving “She’s a Rainbow” is a big part of the song’s cinematic sweep.

Even though they’ve probably played arenas and stadiums for longer than any band in the world, the Rolling Stones always played more like a tight blues combo than an arena rock band. But Charlie Watts gives his tom-toms the kind of big arena rock wallops that the haunting grandeur of “Gimme Shelter” demands, letting producer Jimmy Miller’s maracas and guiro do the work of maintaining the groove.

Possibly the best Rolling Stones track without Keith Richards on it, “Moonlight Mile” was the product of a spontaneous late-night session with Mick Jagger, Mick Taylor, and Charlie Watts laying down the basic tracks as a trio. It was a rare occasion when Watts played with mallets, unfurling dramatic cymbal rolls and rumbling on the tom-toms for the epic closing track to Sticky Fingers.

Every note of “Tumbling Dice” is perfection, and each of the song’s hooky little moments has a perfect Charlie Watts snare fill to accompany it. The drums fall in during an unexpected spot in the opening guitar flourish, the three snare hits before every “baby” boost the track’s irresistible singalong energy, and the breakdown and build up into the final “you got to roll me” refrain is sublime.

Even lesser Stones albums often had a killer opening track with It’s Only Rock ‘n Roll being a prime example. Mick Jagger’s first words on the album are “The band’s onstage and it’s one of those nights/ The drummer thinks that he is dynamite.” And though you seldom get the sense that Charlie Watts was the self-impressed drummer of the lyric, his performance on the song has a snappy intensity, especially on the funky bridge. In the ‘70s, Keith Richards and Mick Taylor often laid down basslines themselves instead of waiting for Bill Wyman to come to the studio, and Richards forms an airtight rhythm section with Watts on “If You Can’t Rock Me.”

Nearly every big rock band flirted with disco for a song or two in the late ‘70s, but few did it on their own terms as well as the Stones, making it feel like a natural progression of their established rhythmic sensibility. Charlie Watts keeps a steady four-on-the-floor kick drum going for the whole song, but at his own unhurried pace, and he picks and chooses when to open his hi-hat for a typical disco cymbal pattern for a couple of bars, and when to keep it closed.

Most major label rock bands adapted to big gated drum sounds that were all the rage in the ‘80s, but even on the Stones’ most overproduced albums, Charlie Watts remains the nucleus of their sound. Four backing percussionists, including Sly Dunbar of the reggae production duo Sly & Robbie, bang on bongos and even timpani on the bombastic opening track of 1983’s Undercover, but Watts’s hi-hats are running the show.

Some of Charlie Watts’s best performances were on songs like “Sister Morphine” where he was silent for the acoustic opening half the song, until a couple of thumps of the kick drum and the crack of a snare cue the band. Tucked towards the end of Voodoo Lounge was a slow burner sung by Keith Richards where Watts booms ominously on his tom-toms for a few minutes before a big grimy full-band groove finally comes in. In 2000, “Thru and Thru” memorably soundtracked a scene in the season 2 finale of The Sopranos.