Music festival fans know what they want and what they want now is an encore weekend for the fifth annual, Eddie Vedder-founded Ohana Festival. So here’s what they are getting: a two-day extravaganza on Friday, Oct. 1 and Saturday, Oct. 2 at Doheny State Beach in Dana Point, California headlined by Pearl Jam on both nights.

Week one of the festival is already sold out, but you can snag tickets for the encore weekend Friday, July 23 at 10am PST here. Ticket options include Single Day GA, Single Day VIP, 2-Day GA and 2-Day VIP.

A portion of the proceeds from Ohana will benefit the San Onofre Parks Foundation and the Doheny State Beach Foundation.

Open to all ages, the festival will feature craft beer, wine, signature cocktails, as well as artisan food options from local restaurants and food trucks.

Pearl Jam was originally set to headline the 2020 festival, alongside Kings of Leon and Vedder himself. As for the 2021 event, it will take place the weekend before with a slightly different lineup, which also features some of the performers from the Encore Weekend.

See the full lineup for Ohana’s Encore Weekend below. 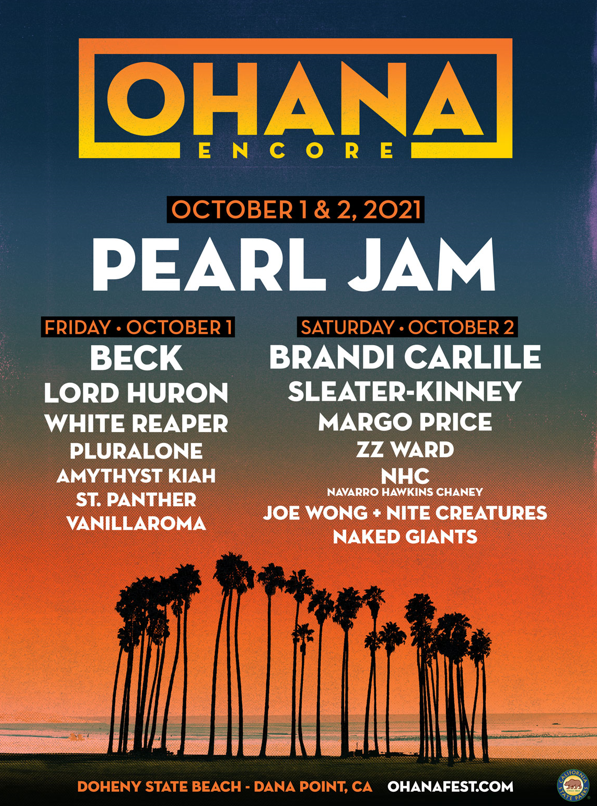