In the history of Chicago concerts, there has likely never been as much riding on a live music event as on Lollapalooza 2021. It’s been less than two months since the city fully “reopened” for the first time since the COVID-19 pandemic sent it spinning into lockdown, and like elsewhere in the country, the rise of the Delta variant has been cause for alarm due to its implications for public health and local economies. Chicagoans are rightly concerned about what a massive outbreak related to a festival with roughly 100,000 attendees per day could mean for the safety, health, and livelihoods of the people who live and work in the city (Chicago Tribune columnist Rex Huppke called Lollapalooza a “mistake waiting to happen”). And in the live music community in Chicago and beyond, which is just getting back on its feet 16 months after the virus shut it down in March 2020, there is a sense that any superspreader event could force it to shut down again.

While anxieties rose in the days before the festival, excitement was also high, especially for artists whose careers had been sidelined by the pandemic for more than a year. “It’s a milestone in my life, and it’s an honor to play in Chicago at one of the biggest festivals in the world. It’s been a dream of mine, and it came true with hard work and passion,” said Na’el Shehade of Chicago R&B-tinged dance-pop duo Drama. The band released their full-length debut Dance Without Me in February 2020, and are just now beginning to perform those songs for an audience. After playing an official pre-Lolla show at Chicago’s Lincoln Hall, they feel even more energized for their Saturday set at the festival. “The crowd was good, it sounded great, and it was a lot of fun,” singer Via Rosa said.

On Tuesday, Chava Ilizaliturri and David Stewart Jr. of Los Angeles-Mexico City eclectic rock duo Migrant Motel, who headlined the BMI stage on Thursday, acknowledged the strange balance of preparing for the biggest show of their lives while the pandemic rages on, but expressed confidence that the organizers would have things under control.

“I think what happens at this festival is going to be looked at for a while, for other festivals coming up and everything. Importantly, I think the people behind the scenes know that, and I don’t think they’re going to blow it.” Stewart said.

But as much as anyone can plan ahead, the only thing you can anticipate in a pandemic is that things can and will change fast. We saw that in real time at the outset of the pandemic, and now that Delta’s here, it’s happening again. 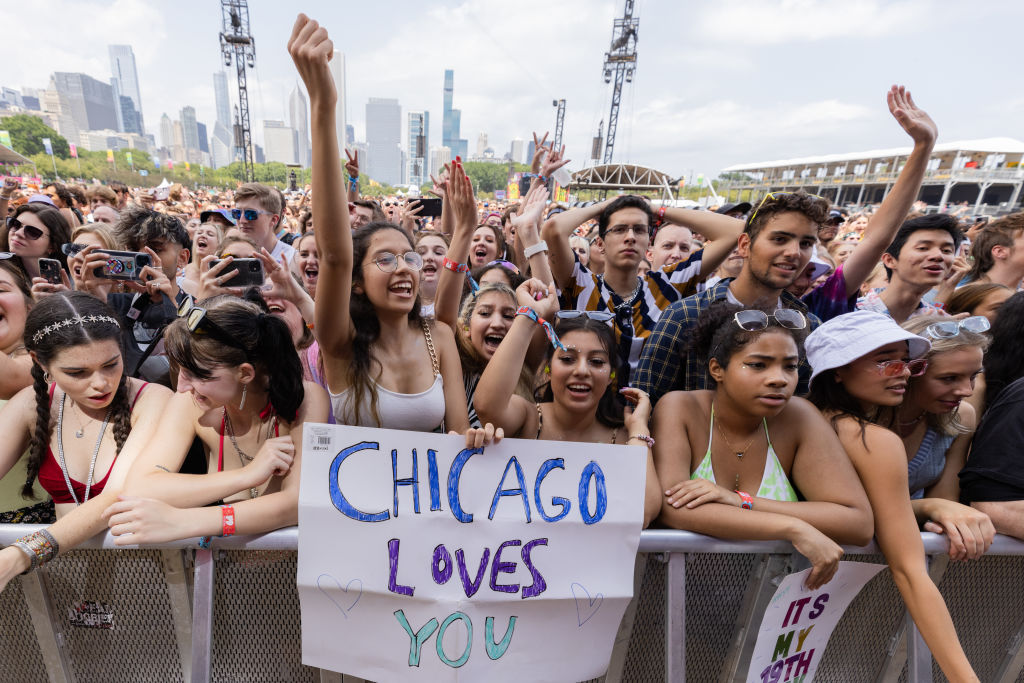 As the infection rates drastically rose in Chicago during the past couple of weeks, nothing seemed to change on the Lolla front in the face of the new variant. The festival put out a detailed “fan health pledge,” including a requirement to bring a vaccine card or proof of a negative COVID-19 test result within 72 hours of the event. However well-intentioned, much of the guidelines rely on individuals to do their part, and as we know by now, a negative test result today doesn’t ensure one tomorrow. The city currently has 14 states on its Travel Advisory List for that reason, yet the city has continued to encourage people to come to Lolla, even as some local doctors advised against going, and some local media figures called for the festival’s cancellation.

Had the pandemic not been looming in the backdrop, it would be easy to call Lollapalooza’s opening day an indisputable success. Their onsite operations ran like a well-oiled machine (seriously, it’s impressive). The sun was shining, people were happy, and the sets largely seemed to go on without a hitch.

Alyson and Amanda Michalka, the sisters who perform as pop duo Aly & AJ, described a heightened atmosphere of excitement when they opened the T-Mobile main stage. “People are just ready for live music after so much time in lockdown. They’re excited to get that energy from a live band, to hear the rumble of the bass, and to hear those first notes. When we strummed that first chord it felt just like the heavens opened up—and we were feeling that too,” Aly says.

Orville Peck described a similar vibe from the small handful of shows he’s been able to play since he had the rug pulled out from his spring 2020 tour, which left him scrambling to get home. “Everyone kind of realized the things they took for granted during the pandemic. Performing has always been my biggest love, and I think now it’s even deeper,” he says. “You can see it on everyone’s faces right now—everyone is just so excited to be back, seeing live music, and being a part of it.”

The mysterious crooner’s impeccable mid-afternoon set at the T-Mobile stage showed the promise of outdoor live music in this strange time—several people were masked (and not with just the fringed kind Peck favors). Aside from a small, passionate cluster of fans at the foot of the stage, everyone in the relaxed crowd seemed inclined to give each other space. But the day was still young—how many more people would pack into the same area by the time Miley Cyrus kicked off her headlining set? Walking through the park by the packed VIP areas and sponsored beverage lounges and around to the Solana x Perry’s Stage, where a massive dance party was underway, reinforced the sense that the festivities were still just getting started. 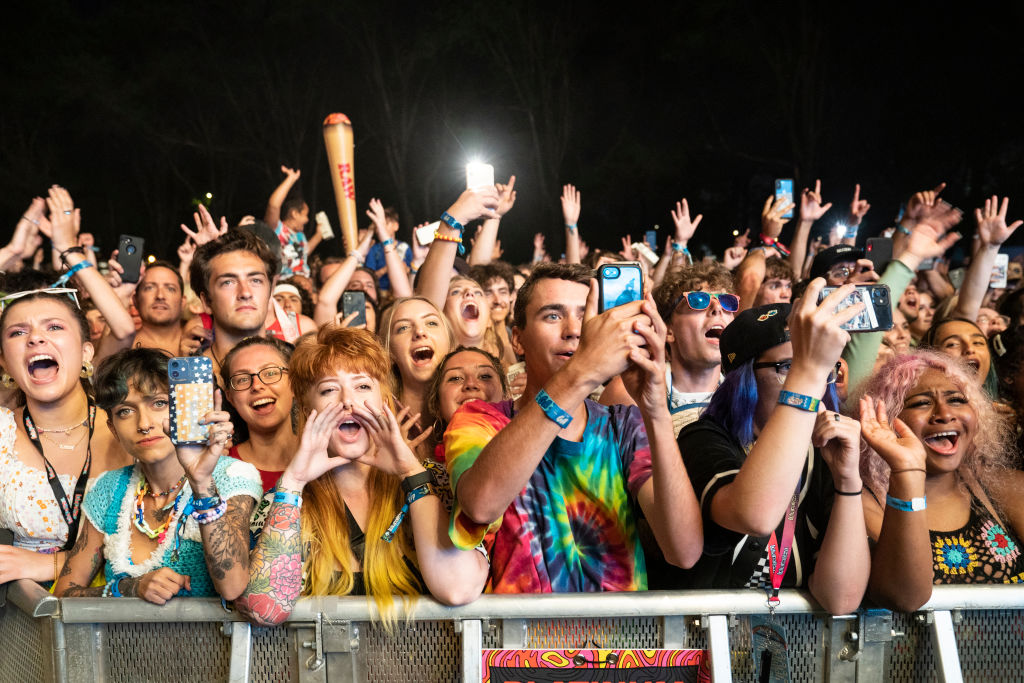 While festivalgoers reveled in the music, the Washington Post revealed an internal document from the CDC that warns the Delta variant is as contagious as chickenpox and suggests that vaccinated people may transmit the virus as easily as those who are unvaxxed—oh, and that mild breakthrough cases aren’t so rare after all. Locally, news broke that Illinois had reached high enough infection rates that federal officials recommended masking indoors in 84 of its 102 counties, regardless of vaccination status, and Chicago Public Health Commissioner Allison Arwady suggested a citywide mask mandate is on its way. Just before 5 pm, Lolla organizers tweeted that, by their count, 90% of attendees showed proof of vaccination, 8% brought proof of negative COVID tests, and 600 people were turned away for lack of documentation. Meanwhile, people continued to pour into Grant Park by the thousands.

That sentiment was echoed by several other artists interviewed for this piece, and each band described the steps they have been taking throughout the pandemic to keep themselves and their fans safe; Peck asks that venue employees mask in common areas, and his team does the same; Aly & AJ recalled conversations with vaccine-hesitant fans. “Our crew is so grateful and so thankful that we have an opportunity to play and be part of an event that is so lively, and the last thing we want is for the event to be over and the entire city of Chicago to go ‘Well, that fucked us. Let’s not do that ever again.’” Stewart said. 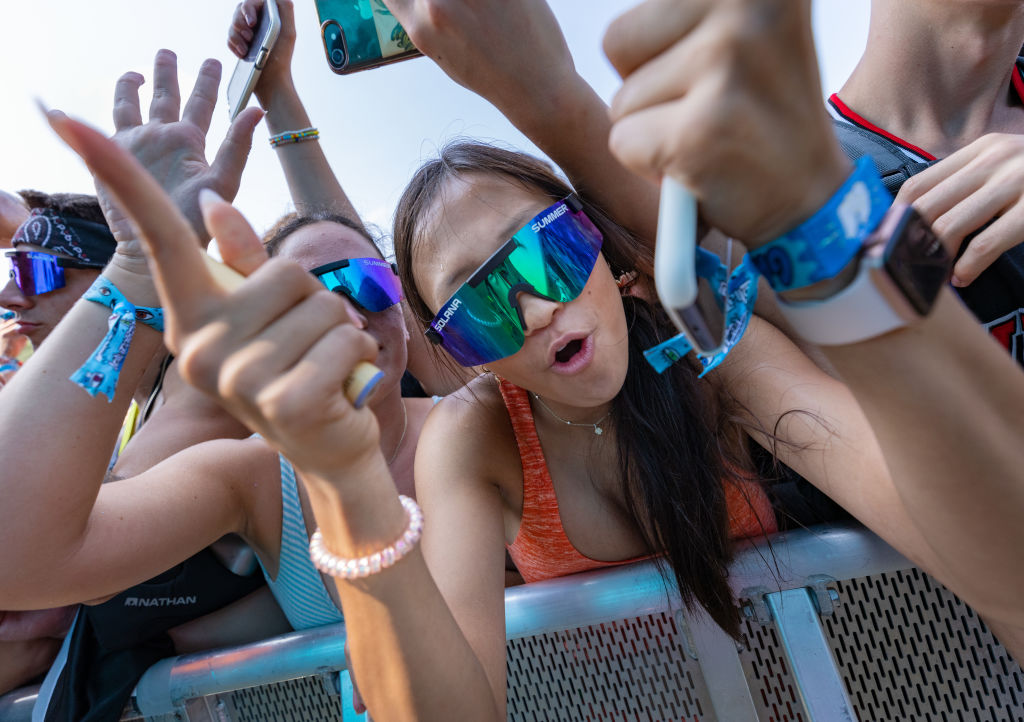 That said, with an event this massive, the artists are not the key decisionmakers; few have the clout to influence the proceedings beyond whether to play or pull out of their festival set, so the onus falls on the organizers and local government to make the right decisions when circumstances change. Thursday’s audience notably skewed young, and seeing large swaths of underage music lovers throughout the event begged the question of whether promoters who cater to that crowd have a special responsibility toward them (like any healthcare service, most states require parental consent for minors to receive vaccines). Even those who argue that Lolla is outdoors, and therefore safe, might cringe at the stories and photos still circulating on social media of young Lolla fans being tightly packed on the city’s public transit system and Metra commuter trains. And that doesn’t count the 21+ crowd who hit the afterparties and bar scene.

We’re not going to know the implications of the festival for weeks to come in terms of public health and ramifications to local economies as Lolla fans return home — or how what happens this weekend will impact the future of the live music industry at large. But with three days left of the festival, it feels like anything could happen on festival grounds and in our understanding of the delta variant. As the saying goes, “Hope for the best, prepare for the worst,” and that seems like it should go for any fan, artist, vendor, or crew member heading to Lolla this weekend, as well as organizers and the city of Chicago as the situation continues to change under their noses.