Inhaler Are Blazing Their Way to Stardom

Home » Features » Interviews » Inhaler Are Blazing Their Way to Stardom

Playing blisteringly tight, searingly good, and crowd-drenching sweat-filled live sets were giving Dublin’s Inhaler an old-fashioned breakout-in-the-making buzz, that is until the pandemic put a halt to just about everything. They were on the eve of their biggest tour yet in America, set to play sold-out venues, extra added dates, and had landed a sweet spot at Southern California’s Ohana Festival, where they were going to take the stage a handful of acts before headliner Eddie Vedder, performing what could have been one of those legendary, L.A.-conquering performances that cemented things for them for years stateside.

So, when the world stops for a once-in-a-century pandemic, what’s a live-loving, live-living, live-breathing band of 20 year-olds meant to do? Follow the rules, of course, and head into lockdown like everyone else. And then, when things start to open up, bring that spirit of the road still closed to them, and the drive of four young Irish lads ready to take on the world into the studio.

“We try to write our songs for a live setting,” frontman and guitarist Elijah Hewson tells SPIN over a very un-rock ‘n’ roll-esque Zoom on a Monday afternoon, as he sits on a couch alongside guitarist Josh Jenkinson. “And I think we wanted the album to feel like one of our shows.”

And so, Inhaler – Hewson, Jenkinson, bassist Robert Keating, and drummer Ryan McMahon – brought their usually driving, sometimes jangly and indie-esque, and occasionally stadium-style spaced-out guitar licks, super-fueled drums, a barrel full of 1980s-Manchester-esque deep and throbby bass lines, and a fine ear for a soaring vocal melody (Hewson’s been blessed with a powerful set of pipes, not unlike his dad, Bono) with them into the studio. 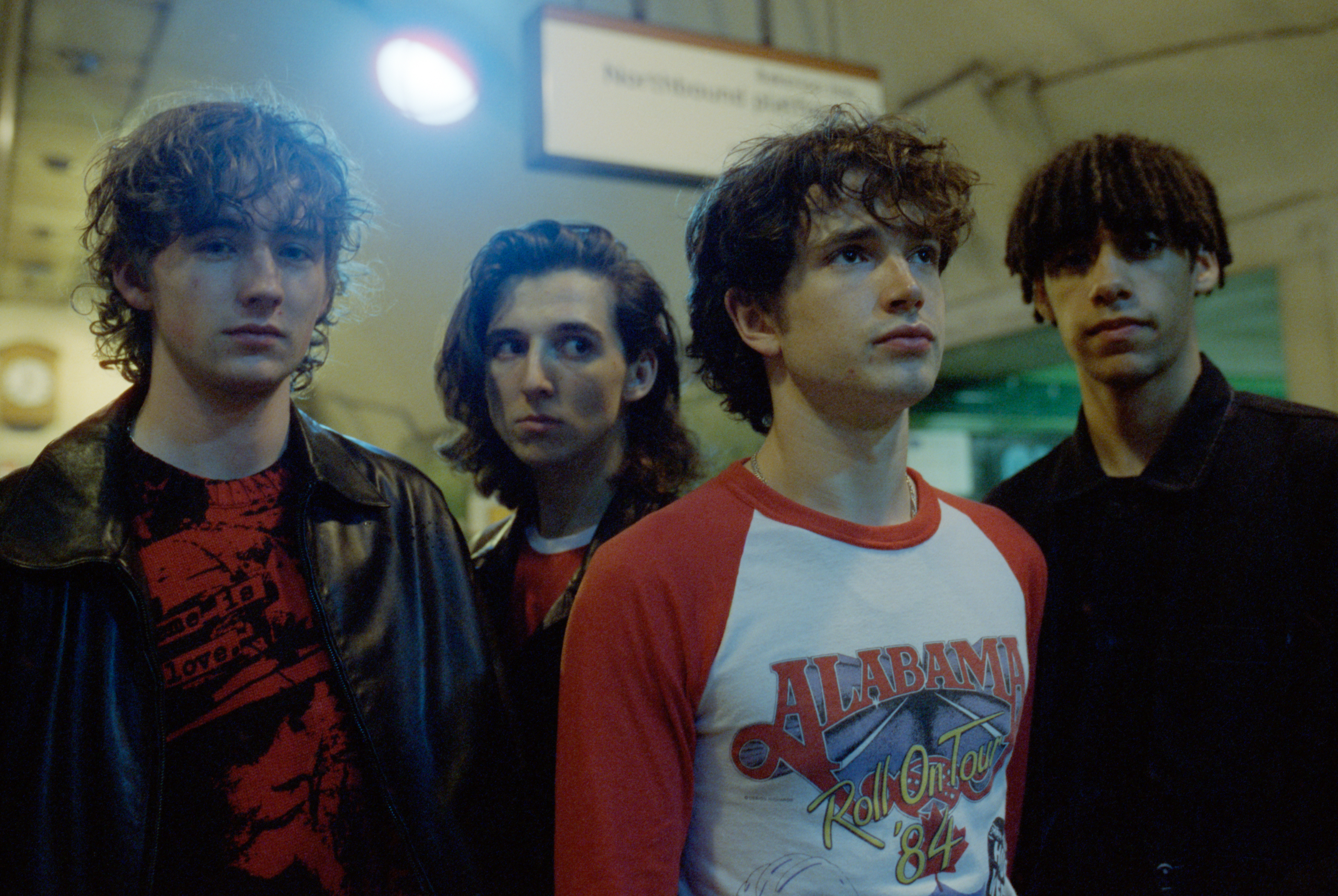 Paired up with longtime producer Antony Genn, the boys put together It Won’t Always Be like This – a terrific debut album that’s not out of place hanging out alongside some of indie rock’s most notable bows in the last couple of decades – Hot Fuss from The Killers, and even Is This It? from The Strokes. It Won’t Always Be Like This is a record that defies being pinned to a time, in a way that all good rock records do, and is begging to be played in an outdoor amphitheater, or just after the sun goes down at a warm summer music festival, right as the breeze kicks in.

“Someone just asked us… ‘Why are you so inspired by music that was so not from your generation? I think the honest answer [is] it’s just because we think music was better back then, in general,” Hewson says, with the band’s influences steeped in ‘80s, ‘90s, and ‘00s indie and alternative rock (which we talked about with him last year). “We were looking at the charts, and [Oasis’] [What’s the Story] Morning Glory? is like No. 26 in the album charts right now in the UK. Great songs are great songs, and maybe the style that they’re in maybe gets old, but if there’s a great song like, it never dies. There’s a reason people are listening to ABBA still, at like every party ever.”

Opener “It Won’t Always Be like This” mixes shimmering synths, quarry-quaking drums, electro-fuzz guitar solos and Hewson’s impassioned vox (and is the kind of song that would totally have landed them in an unwanted feud with The Killers if it’d been released in 2005); “My Honest Face” pays a nod to Joy Division (think “Transmission”), smashed together with a 21st-century pop sensibility; “Slide Out the Window” is the perfect groove for a lazy summer afternoon daydream; while “In My Sleep” is an anthemic end-of-show style driver, with each and every part as achingly engrossing as the others.

“I think a big part of that was our producer Antony Genn and his experience of hanging out with Joe Strummer,” Hewson says in that Irish way of not being able to take a compliment, and tossing credit to their producer, whose experience crosses a wide variety of genres and artists.

“It’s not the most popular kind of sound at the moment,” Hewson continues, trying to explain how four 21-year-olds developed such keen ears for melody, paired with an intensity that’s ready to be unleashed in a live setting. “But I think that’s why it stands out. And I think one of the things is when you listen to it, it sounds confident, and I think we all know that it sounds like us live. And I think that’s because [most of] the songs were written live.”

But it wasn’t always like this for Inhaler. Sure, the Irish band has serious rock ‘n’ roll chops now, but it wasn’t too, too long ago when they sucked, at least that’s what they say.

“[We sucked] for a long time,” Jenkinson chimes in. “We didn’t know we did because there were still a few people [who’d] show up for the gigs.”

“The person who actually said it to us was… Ant, and like, God bless him, he just came up to us and was like, ‘Lads, youse are shit.'” Hewson says as he and Jenkinson laugh recalling the years-old conversation. “He’s like, ‘Look, songs are great. You just have to be able to play them.'”

Hewson says they found inspiration in the work ethic (i.e., practicing until everything is tight, and then still practicing) of ensembles this side of the pond, instead of just across the water in Blighty. Becoming good players allowed them the freedom to challenge themselves.

“I think we just want to be more like an American band because we write music that’s so demanding,” Hewson says.
“I have songs that are really hard to sing. We were writing songs on drum machines when we were on lockdown, and [that’s hard] for any drummer to get onto,” he continues. “Now, I think we’ve hit a point where we really can do the songs justice, but for a long time it was ropey.”

That, though, is in the past, with the proof being what the boys of Inhaler see as their game-changing gig at legendary Sunset Strip venue The Roxy in Los Angeles, in 2019, where they weren’t even the headliners (they supported pals Blossoms).

“Just to see a reaction like that from a crowd – it was pretty mind-blowing for us, and I think it really gave us a confidence boost that kind of might have got us through this whole pandemic, and just having hopes of being able to gig and go to these places again,” Jenkinson says of the capacity crowd, that hung on every note.

With the concert industry finally getting back on its feet and reopening, Inhaler is ready to get back to being a live band. There’s a sizable UK trek this fall, wrapping up with, — count ’em — four gigs in Dublin just before Christmas. And in March, they return stateside for a long-awaited jaunt that goes from Atlanta and Nashville, Minneapolis to Milwaukee, and even makes multiple stops on the East Coast and across Southern California.

“We’ve Googled all of [the venues],” Hewson says. “I didn’t know where we were playing in New York, but someone was like, ‘Oh yeah, we’re playing Irving Plaza and I was like, ‘What?!’ And then, the next night, we’re playing a gig in Brooklyn in this place called the Warsaw. So, we’re doing one night in Manhattan, one night, across the river in Brooklyn. I think for us, [it] just feels like we’ve made it, you know what I mean? It’s an incredible feeling. I can’t believe that there’s that many people who want to come see us.”