In June 2020, country music had zero openly LGBTQ+ artists signed to Nashville’s major record labels. By June 2021, country music had three openly LGBTQ+ dotting the big record label rosters. Brooke Eden went public on social media with her longtime partner Hilary Hoover in late 2020, and Lily Rose signed with Big Loud Records in a joint deal with Back Blocks Music and Republic in January 2021 partly on the strength of her uptempo love song “Green Light,” sung directly to another woman. Then, CMA Award-winner T.J. Osborne of the country duo Brothers Osborne came out as gay in a February 2021 feature in Time.

As a result of that modest yet groundbreaking queer uptick, this year’s Pride month was hands down the queerest in country music history. As the host of Proud Radio, an LGBTQ+-focused show on Apple Music Country, I’ve had a front-row seat to all of this progress, but Pride month also highlighted the work that still needs to be done when it comes to country music and the queer community.

First, let’s look at the progress.

At the Grand Ole Opry, country music’s longest-running radio show, Opry member Trisha Yearwood teamed up with fellow country artist Brooke Eden to perform Yearwood’s signature hit, “She’s in Love With the Boy,” as “She’s in Love with the Girl.”

The pronoun change was a nod to Brooke’s long-term relationship with her now-fiancee Hilary Hoover, who co-stars with Eden in the romantic videos for her latest singles, “Sunroof” and “Got No Choice.” The couple got engaged in May 2020, and Eden has emerged as a strong LGBTQ+ voice throughout 2021.

Country-pop newcomer Lily Rose continued her hot streak in June releasing a queer take on the Sam Hunt-penned song “Remind Me of You,” which followed her viral hits “Villain” and “Overnight Sensation.” Rose has a raspy quality to her voice that accentuates the swagger in her musical style. As a guest on Proud Radio in June, Rose told me she often hears from aspiring queer artists who find hope in her early success.

She said, “I have musicians and artists from around the country that slide into my DMs that say, ‘We want to the move to Nashville to chase the dream, but we’re afraid.’ I’m like, ‘Come.’ You’ll feel the warmth. Yeah, we’ve got a lot to work on still, we’re all trying to change this game.’”

And then you have Brothers Osborne’s T.J. Osborne. As an established headlining artist with several No. 1 hits under his belt, Osborne is the most prominent country artist to reveal their queerness so far, and his journey of self-acceptance has been an inspiration to watch. Originally, Osborne planned to only talk about being gay once in the Time article and then go on with life as normal, but the author of that article challenged him not to minimize his queerness. After hearing from other queer folks who’ve been marginalized out of country music for decades, Osborne began to shed the reflex to police his words and actions to edit out telltale signs of his sexuality. By June, he was speaking openly about this evolution and even sharing thoughts on gay sex in a profile in Esquire.

“I didn’t think I’d want to talk about being gay this much,” Osborne said. “And then when I came out, there was just this calling. I wouldn’t even call it an obligation. It just felt like a purpose. Sometimes now it’s hard not to talk about it.”

The queer conversation also made its way into a new Brothers Osborne track titled “Younger Me,” a chronicle of the anxiety Osborne felt wrestling with his queerness as a kid.

The black-and-white video for the song made a bold and graceful statement with Osborne and his brother/duo partner John Osborne performing “Younger Me” on the steps of the Tennessee State Capitol in Nashville. The clip also includes footage of people affected by the anti-LGBTQ+ and racist legislation passed in that very building this year by the Tennessee State Legislature.

Osborne himself faced rejection from that legislative body when lawmakers refused to pass a resolution recognizing his achievement becoming the first openly gay artist signed to a major label in Nashville. It was attention Osborne never sought out for himself, but the way Brothers Osborne reached out to the legislator who killed the resolution via Twitter and then went on to make the “Younger Me” video are both beautiful examples of how we in the LGBTQ+ community can stand up for ourselves with dignity while extending the opportunity for change to those who don’t accept us right off the bat.

This Pride month also highlighted a few things country music needs to keep working on, starting with the fact that every queer artist I’ve mentioned so far is cisgender and white. But to judge the genre-based solely on the artists signed to major labels alone is to miss a bigger story happening at the intersection of queerness, race, and country music. That’s where you’ll find the groundbreaking work of black, queer artist Amythyst Kiah, who just made her Grand Ole Opry debut on June 29. Inspired by her work with Black female collective Our Native Daughters, Kiah is leaning into her story like never before with her soul-baring new album, Wary + Strange. The standout track, “Black Myself,” in which finds Kiah boldly addresses her race and sexuality, even earned a Grammy nomination. 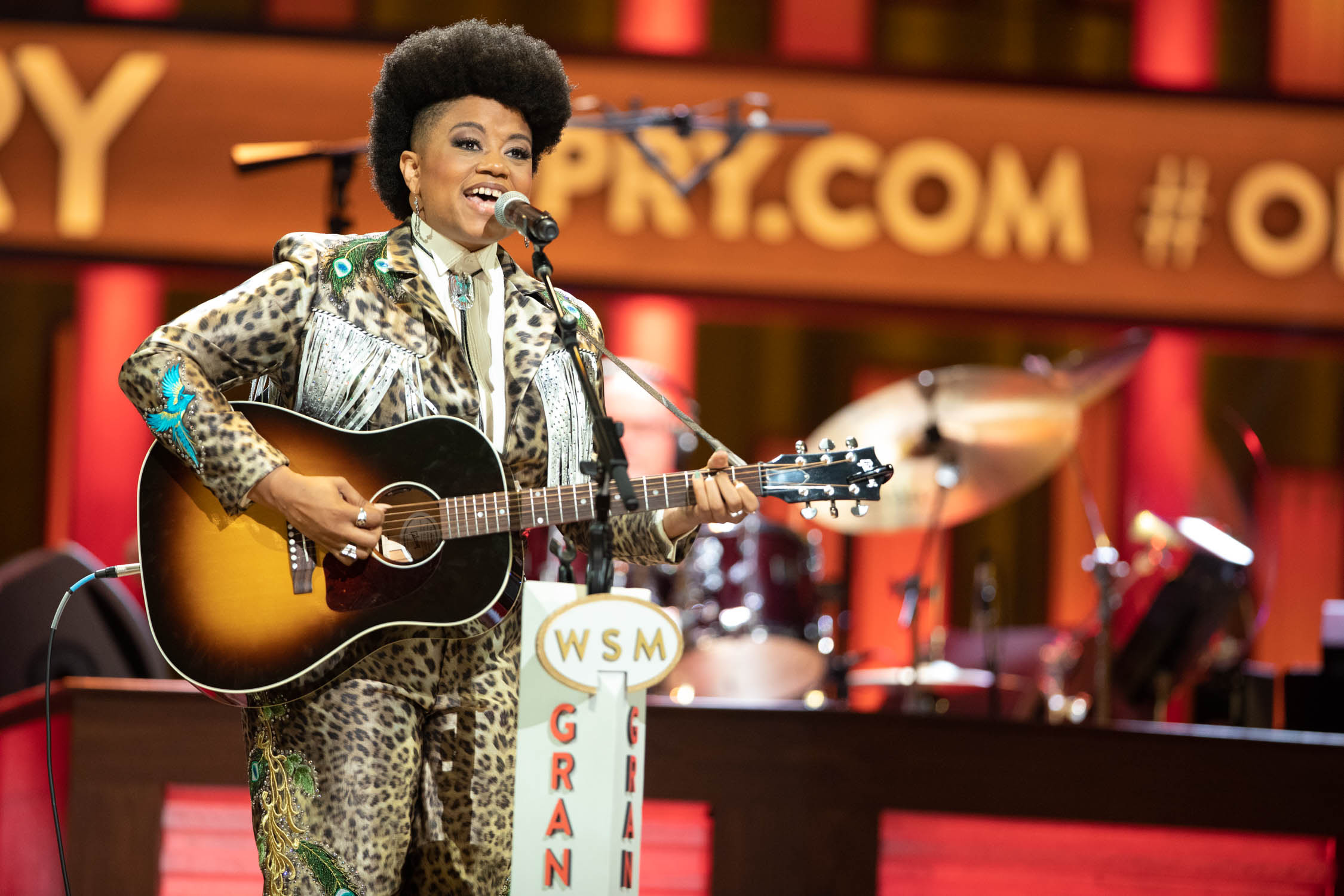 In her recent interview on PROUD Radio, Kiah admits she was initially afraid of alienating certain segments of the country/Americana audience with songs like “Black Myself.” Those fears proved unfounded.

She says, “As time’s gone on, every time I’ve opened up about something about myself, whether it be my sexuality or even the way I present myself — Whatever I lose, I don’t even notice it —- because more and more people are feeling like Americana and country really speaks to them. They’re able to overcome the stereotype and the separation the commercial music industry has created…queer and POC [are now] seeing country and Americana as legitimate forms of expression.”

Amythyst Kiah is not alone in this space. D’orjay The Singing Shaman, Allison Russell, Delila Black, and Luisa Lopez are just a few of the other Black, queer artists making inroads in country and Americana music outside the major label system along with essential trans and non-binary artists Izzy Heltai, Ryan Cassata, Mya Byrne, Brody Ray, Rae Spoon, Adeem the Artist, and Semler. And that’s not nearly a comprehensive list of this vibrant, eclectic, and talented community of musicians.

As my friend and fellow Apple Music radio host and artist Rissi Palmer recently tweeted, “When you get to the bottom of some of our beliefs, you realize SO much has been fed to us to keep us in our respective places…”

Community is the antidote to the fear that artists will lose everything if they speak out and upset anyone, anywhere in the country music fanbase. As we face this fear, we should continue to question why we were content not to see our stories represented in country music for so long, and then keep taking the steps to challenge those outdated narratives that kept us apart and kept us silent.

There’s real power in banding together with all marginalized voices working for change in country music, too. You see that with Mickey Guyton joining the lineup at Miley Cyrus’s “Stand By You” Pride Month concert special along with Little Big Town, Maren Morris, Orville Peck, and, of course, Brothers Osborne.

Watching all of this play out on social media, it’s clear to me we are fighting a common cause. The voices that are telling Mickey Guyton and Kane Brown to minimize their blackness to fit in to country music are the same voices telling queer artists like T.J. Osborne and Brooke Eden they shouldn’t lead with their queerness.

I’ve also seen the fights for racial and LGBTQ+ equality in country music inspire each other.  After all, Brooke Eden got a big push to come out and live authentically after watching her friend Mickey Guyton own her story with “Black Like Me” and “What Are You Going to Tell Her. During her appearance on PROUD Radio, Eden recalled the night Guyton first came over to her house and played those songs for her before they were released to the public.

As we move forward, the country music fans pushing against acceptance are either going to change, or they won’t. But in seeing queer artists represented at the country awards shows, on their streaming playlists, on the Grand Ole Opry stage, and on their festival lineups, country fans will get the message that the world is changing. They may start to wonder why they’re one of the few not on board. And if they don’t come around, then they were never our audience anyway. It’s time to let them go and focus on the audience that is ready to hear LGBTQ+ voices.