Clairo Doubles Down on Restraint on Sling

Claire Cottrill’s rise to internet stardom is well-chronicled. While drinking a Dunkin’ coffee in her childhood bedroom, she lip-syncs to “Pretty Girl,” her unlikely viral video that has now amassed more than 75 million views on YouTube. She didn’t expect the reaction that it received. “By the time I got to school for orientation, people already knew who I was,” Cottrill said in 2019. The following semester, she packed up her dorm room at Syracuse University to perform under her moniker, Clairo, as an opener for Dua Lipa. She’s since moved away from the lo-fi bedroom pop that characterized her breakthrough EP, diary 001, which included “Pretty Girl” on its tracklist. With her sophomore record, Sling, she focuses on restraint and soft, subtle arrangements. It’s uncharted territory for her, but it works on many levels.

For her 2019 debut album, Immunity, Clairo recruited former Vampire Weekend member Rostam Batmanglij as her producer. Batmanglij’s distinctive baroque-pop appeared throughout the record, as did his modern idiosyncrasies, such as the sleek minimalism of “Closer to You” and the clipping distortion on “Sofia.” He’s nowhere to be seen on Sling; Bleachers frontman Jack Antonoff enters the fold with his new tradition of downtempo indie-pop, as heard throughout his more recent oeuvre such as St. Vincent’s Daddy’s Home, Lana Del Rey’s Norman Fucking Rockwell!, and Lorde’s new single “Solar Power” (Lorde even makes a couple of cameos as a backing vocalist on “Reaper” and Sling’s only pre-released single, “Blouse”).

Where Antonoff’s production adhered to crystalline dance-pop on 2017 albums such as Lorde’s Melodrama and St. Vincent’s MASSEDUCTION, he has veered toward naturalist terrain in recent years, and he continues that tradition with Clairo’s Sling. From the first few moments of opener “Bambi,” it’s clear that Clairo is adapting a new sonic palette, which emphasizes piano, strings, Wurlitzer, 12-string guitars, fretless bass, and myriad other instruments. These compositions mirror the environment that Clairo and Antonoff worked in: the mountainous landscapes of upstate New York at Allaire Studios. To reflect the nature around her, Clairo doubles down on restraint, through which she allows her songs to unravel in real time. Most of its 12 tracks relish in their carefully constructed tranquility, but that doesn’t mean Sling lacks ebullience.

“Amoeba” is an immediate highlight, which recalls ‘70s pop akin to Antonoff’s work on Daddy’s Home but imbued with more buoyancy. “Aren’t you glad that you reside in a hell and in disguise,” Clairo questions over a simple drum pattern and wah-inflected electric keyboards. Though some of Sling’s instrumentation occasionally verges on homogenous, Clairo’s keen sense of songwriting and visceral lyrics help dispel the inertia. “Blouse” paints a portrait of misogyny in the music industry, and Clairo expresses her disillusionment with its current state (“Why do I tell you how I feel when you’re too busy looking down my blouse?”). 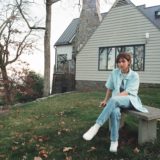 Clairo Is Going Her Own Way

Even without lyrics, Clairo and Antonoff demonstrate their creative symbiosis through their arrangements. “Joanie” is a wordless track dedicated to Clairo’s dog, who’s named after singer-songwriter Joni Mitchell. It’s a perfect encapsulation of Sling’s musical ethos. Clairo introduces the track with a piano melody that slowly yields to a percussive groove and chimes, which Joanie plays herself. She’s even credited with snoring in the album credits, too. It makes sense that Clairo dedicated Sling to her four-legged companion. “Just for Today” is one of Clairo’s best songs, and it evokes celebrated musicians such as Mitchell and Stevie Nicks through its acoustic-led composition and melancholic backdrop. It would have sounded out of place on diary 001 or Immunity, but Clairo shows that she can adopt whatever sound suits her best in the moment.

Sling fits into the zeitgeist of devastatingly specific, confessional songwriting, especially within indie-pop. Contemporaries such as Phoebe Bridgers and Lucy Dacus have helped popularize the style, but that doesn’t mean Clairo is copying her peers. Rather, she’s paving her own path, just as she’s done on each preceding release. She continues that trend on Sling, where she explores musical terrain that’s completely new to her. Though Antonoff’s production sometimes feels like it’s holding Clairo back a bit too much, that doesn’t impede Clairo from writing excellent songs. Sling is further proof of that.