It’s no coincidence Liz Phair’s new album Soberish was released just in time for the entire world to reemerge into existence. Since her powerhouse 1993 debut Exile in Guyville, Liz has proven herself an artist who lights the fire and leads the way. Liz doesn’t follow trends—she is the trend. It stands true, then, that Soberish—released June 4, her first album in 11 years—is a tapestry of Liz’s story thus far, and delivers a fierce and intimate musical portrait of who she is right now.

Produced by longtime collaborator Brad Wood—Exile in Guyville, Whip-Smart, and whitechocolatespaceegg—Soberish reflects a welcomed hint of ‘90s nostalgia, mixed with something unique, honest and truly all her. Because the world was different, her process was too, and it became a period of creative self-discovery. “I think fear shuts down my creative gene. I never thought that there was anything that really shut it down. I thought I could be creative through just about anything, but fear, no,” she says. “You know what they say like art needing pressure, but it depends on what kind. I would never have known that before and I’m glad I know it now. I can plan accordingly. You cannot take for granted the time that is in front of you. You could be like, ‘You know what? We don’t know what’s coming? If you have the impulse to do it, if you’re inspired, do it now.’ I think that’s probably what I’m going to take away from the pandemic.”

For the last three decades, Liz has proven a successful creative career is anything but a straight line. “I feel those 30 years. I do feel connected to that,” she says. “I feel like I’ve gone all these places and done all these things and I still don’t really know what I’ve done with my life. I still can look back and go, ‘Wait a minute, was there any order to this?’”

Well, there’s a definite timeline, marked by consistent career conquests: There’s seven studio albums (including her 2003 self-titled pop release), three U.S. gold records, two Grammy nominations, her work in television composing, and a 2019 memoir. You might say she’s done it all. “I’d like to play at Red Rocks,” she notes, of the remaining items on her bucket list. “I’d like to play Saturday Night Live, but I’m not sure I really want to play Saturday Night Live. I think I actually want to be in the skits…I don’t know that I’d get to do that, but really what I want to do is play in the skits.”

SPIN: Congrats on the new album—how do you feel?
Liz Phair: I am very proud and I’m very nervous in a way too, because it’s adding to a body of work that I haven’t added to in a long time. In a way, that almost touches back even earlier than just my most recent release, because of working with Brad Wood, who was the producer of my first three records. It really does go back to the beginning. It shows where I’ve been, what I’ve learned. I think it shows a lot of the television scoring that I did. More than anything, I think it will be the first time that people hear Brad and me making music in so long. Whatever that calls up, it’s still resonant in a way that is more impactful than even just you haven’t put a record in 10 years.

Is it true Exile in Guyville was recorded over two years (from ’91 to ’93)?
It did not take that long. That means that I went in one weekend and maybe not ’til next month and then — it just was slow — I was really working around Brad’s schedule at the time. We had such a tiny budget that it was just when he had free time. I’d come in after his paying sessions or before or something like that. It was not a laborious process. It was just stopping and starting.

What sets Soberish album apart from the rest?
I think it has an interesting sound, and I intentionally worked to give it this sound. None of the arrangements are traditional. All of the arrangements are pretty radical departures from what a traditional song structure would be, but I did it in such a way that hopefully you wouldn’t notice, that the hooks were strong enough, the melodies. We did a lot of subtraction. I ended up taking a lot of my guitar parts off, which is really unusual for me, and leaving things a little more open-ended.

I would say the shape of it is going to be what sets it apart, the dynamic within the songs, and the dynamic over the course of the album. I hope it has more theatricality, and more modern abstractness than people realize. Oftentimes the songs on here have two lead vocals that are going simultaneously. They are saying two different things, so listening for that is interesting, too. There’s more than one lead person telling the story.

Do you have a favorite song on the album?
I think “Ba Ba Ba” is my favorite. I like the way it turns mid-stream into a different kind of story. I like the sort of — it’s almost like a boomerang story and I really like that, and it’s meaningful to me. 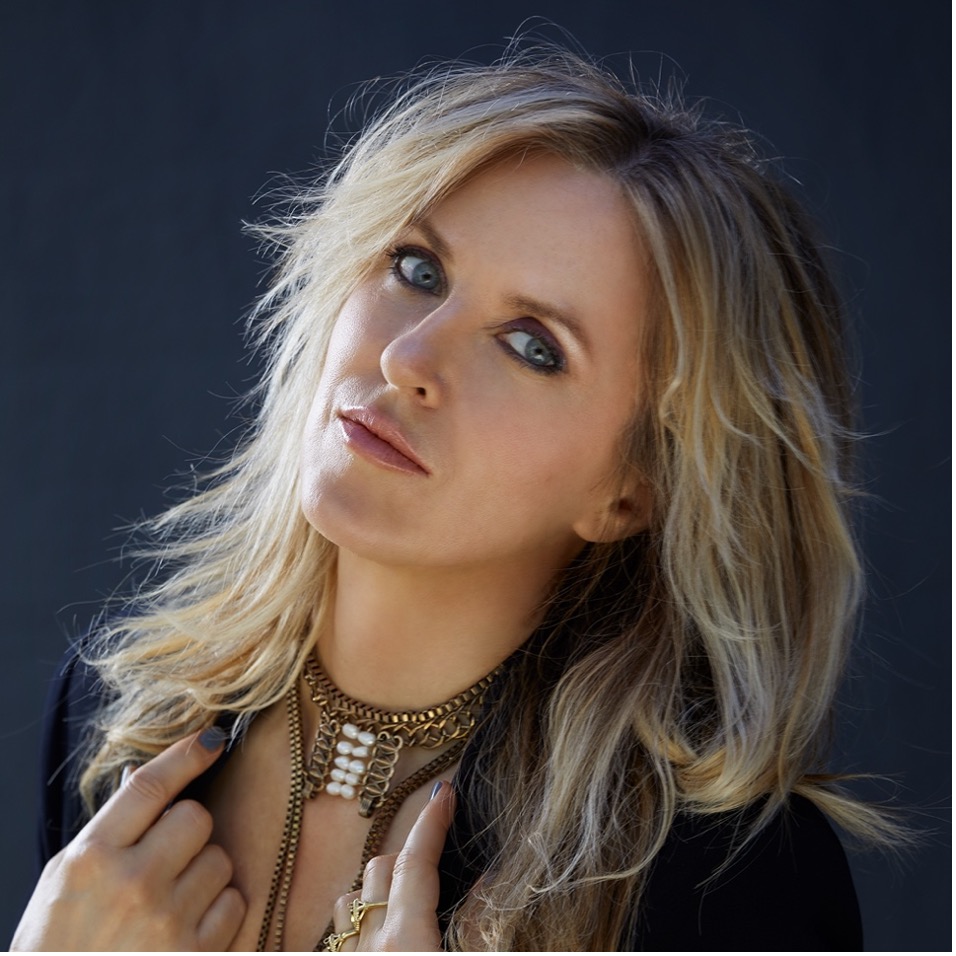 I saw this meme yesterday that said, “Find someone who loves you like people from Chicago love Chicago.”
Chicago is like that friend that I will totally bag on but if you bag on it, I’m going to punch you. I like to bag on Chicago, but you don’t get to.

Normally I’m there all the time. Yes, this year in particular, I miss it. I’d go back about four times a year, so I felt very connected to Chicago still. Felt like it was almost a second home but not anymore. My parents moved to retirement communities so it’s not my childhood home anymore, and also then COVID happened and we haven’t been flying anywhere.

Is there anything you miss about creating music in the early days—before fame, before any kind of label, just that raw music-making?
I guess one of the reasons why it takes such a long time in between records is I like to forget that anyone’s listening. I like to go back to a state of open-minded boundaries. I like to think that I’m still just a young person creating, not in a vacuum, but for whomever I want to. Rather than thinking of, like, “Well, here are your fans and here’s your demographic,” which I don’t ever think about, but it takes me a while to forget.

If your job, which mine is, is to talk about yourself once in a while, or look at pictures of yourself, or write a song about your life…. To be an artist, the way I want to be, the way that I get excited to be, I need to forget about myself. I need to be the observer, not the one being observed. When I do a work cycle, and I have to go through all this time to get rid of that work cycle identity, and go back to an open-minded open soul, an open heart.

What do you think the music business has taught you in all these years?
Read your contract. The people in the business generally are aligned with each other more than they are with the artist. You have more control than you think. You just have to make sure you have done your homework and understand what you’re talking about.

Soberish: What does the title mean to you?
It means a couple of different things. On a literal level, it means exactly that. It means this sense that over the last four years; A) Because they legalized marijuana, which was always my favorite drug, and then, B) Because we just went through the incredible stressor of the Trump presidency and what was going on with the divisions in our country. Then, the pandemic, it was too much for me to handle totally sober. I suddenly had issues — not issues, but substances became something that I thought about way more than before. I had to come up with what I thought a good balance would be in an unbalanced situation, which I thought was a slippery slope. I’ve never been someone that would ever call myself an addict, but if you are dealing with these external realities that you find existentially upsetting, sometimes you need something to take the edge off. I suddenly became very interested in that. Is that a good thing or a bad thing? Is that useful, is it not useful? Is it a bad example to set, is it not a bad example?
Whenever I encounter a question that feels like a hot piece of property, like, “Oh, don’t touch it, it’s going to hurt,” I’m always really interested in it, just the way I was in sexuality and the taboo. The taboo, for me in this record is, how sober should we be and what are our feelings about that?

No answers, but a lot of questions. These are the questions I’m wrangling with right now.

Your willingness to speak openly about vulnerable topics is incredibly powerful.
I get that though because I do tend to speak openly and frankly about things that other people might not acknowledge and I am getting older so I have that wisdom. I think that I can see that. Especially if you are someone that listened to me in your adolescence, there might be even like, “Mommy.” You know what I mean? [Laughs.] We need that right now, and nobody has the perspective. No one alive right now really lived through anything like this before.

It’s important we all experience it. What can you do if you’ve made your name, which I have, I feel like, what can you do with your creativity? I think, naturally, this sounds so boring, so lame, but I think there’s a reason why it’s a stereotype. You can give back your wisdom. You can help illuminate some things for people coming up. You can shed some light on some behind-the-scenes stuff and you can share your life lessons.

The truth is always more interesting.
History is a story that we’ve agreed upon.

It was fun telling my son that when he was younger, saying, “I know it seems like you’re learning about this stuff in high school that is set in stone, written in a heavy book, taught by intelligent teachers, but it’s really just a story that everyone had a hand in contributing to. It’s just an agreed-upon story that this is the one that we’re going to tell. This is the perspective that we’re going to say is the most communal, but it’s changeable. You have a say in this. You can re-write that story, you can deepen that story or you can tell a different one.”