A caricature drawing of Kurt Cobain, done by the icon himself, brought in $281,250 at Julien’s Auctions Music Icons sale. The sale price was 28 times the original estimate.

The drawing, done in black felt pen on TNT Music Centre in Singapore stationery, depicts Cobain playing the guitar and is signed “Kurdt Kobain Rock Star.” Handwritten on the right,  the singer/songwriter penned, “I don’t know how to play and I don’t give a hoot!” 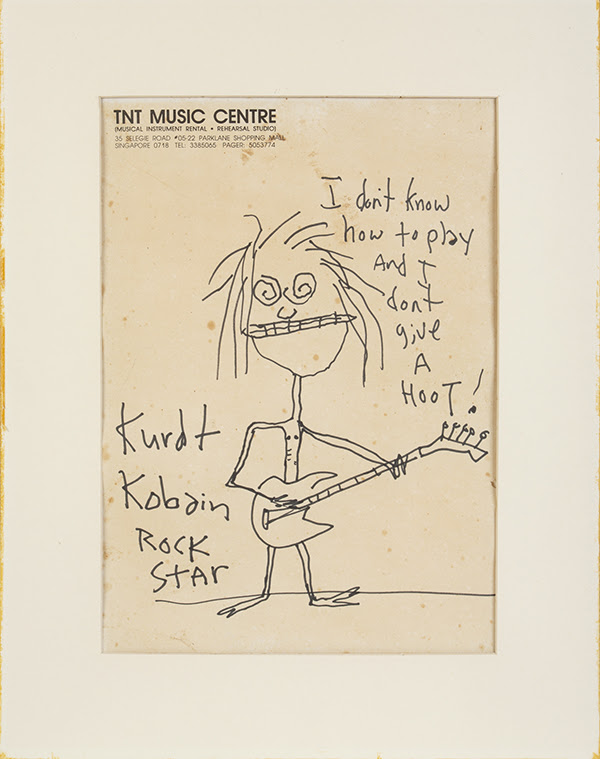 Other Nirvana items from the Nevermind era sold at auction included a purple DOD FX69 Grunge distortion guitar effect pedal played by Cobain while performing with Nirvana at the San Diego Sports Arena in San Diego, Calif. on Dec. 29, 1993. It sold for $16,000, while an original setlist for Nirvana handwritten by Cobain for the band’s concert on April 20, 1990 at the Olde Club in Swarthmore, Pennsylvania also brought $16,000. The setlist included the song “Imodium” which was first recorded in the studio that same month and later renamed “Breed” for inclusion on the Nevermind album.

The  1994 cloud guitar made by Andy Beech and owned by Prince sold for $281,250, matching the bid for Cobain’s portrait at nearly five times its original estimate of $60,000.

Five of Eddie Van Halen’s designed, hand-striped and played electric guitars, including his last stage-played guitar, sold for a total of $210,225.

An Alex Van Halen fan now owns his custom-designed Ludwig drum kit, buying it for $230,400. The kit was played on over 100 shows of Van Halen’s 1980 Invasion tour and displayed at the Rock and Roll Hall of Fame for five years.

One of Cher’s most iconic looks, a black jersey and net cut-out bodysuit and matching black motorcycle jacket immortalized in her hit song and music video, “If I Could Turn Back Time” returned to the auction stage once again and sold for $115,200.  It was originally sold by Julien’s Auctions in Property From the Collection of Cher auction in 2006 for $60,000.

Another legendary drum kit from KISS, played by the legendary Eric Singer, sold for $75,000.