Home » Archives » More Than a Woman: Our 1996 Garbage Feature

This article originally appeared in the April 1996 issue of SPIN. In honor of the release of Garbage’s seventh studio album No Gods No Masters, we’re republishing the story here.

Garbage are standing on a pier looking out at the ocean. Suddenly Butch Vig spots something and points. “What’s that?” he wonders. Steve Marker squints. “Three seals?” he guesses. “I don’t think so,” says Duke Erikson. Shirley Manson pulls out her binoculars and checks. “Oh my God,” she pants. They realize it’s the sopping heads and flailing arms of Courtney Love, Kim Deal, and Alanis Morissette. They’re sinking fast. There’s only time to rescue one of them. Which alternative-rock superstar does Garbage decide to save?

“I have to say Courtney or she’ll kick my ass,” says Vig after a nervous pause. “I’d probably want to swim out and save Kim first, but I think she could make her own way back to shore.”

“Actually,” says Erikson, “Courtney could save herself. I’d have to go for Kim.”

“We’re all pretty p.c. here,” says Vig. “So let’s say we’d rent a tugboat and drag all of them back to shore.”

Actually, Garbage are sitting around an ashtray-clogged table in the bar of West Hollywood’s Mondrian Hotel. The closest thing to a body of water is the round of rum and tonics that Vig, Marker, and Manson have just raised in toast to Erikson. It’s his birthday (“old enough to know better” is as close as he’ll come to revealing his age). Erikson, who looks fortyish, is a tall, lean man with a kindly, goofball demeanor. Big-boned Steve Marker, laid-back Shakespeare look-alike Butch Vig, and birthday boy Duke Erikson have been friends and on-and-off bandmates for years. Vig, of course, is the record producer of the past half-dozen years. As Nevermind‘s sonic architect, he gave grunge its tone of voice, and his light yet serious touch taught punk bands all over the world how to crash the airwaves without sacrificing their edge. More recently, through his work with Smashing Pumpkins, Sonic Youth, U2, and Nine Inch Nails, he helped drag art-rock into the ’90s. The guy’s a bona fide knob-twiddling god, but in person he’s friendliness incarnate.

Surprisingly, so is Shirley Manson. Based on Garbage’s videos, I’d expected someone surly and slouchy and defiantly sensual. In fact, she’s very alert, very funny, speaks with a dense Scottish brogue, and has the tense, imploding posture of someone who’s a lot more comfortable with her mind than with her body. So I guess I can cross off the question an overheated acquaintance begged me to ask. Namely, is the rumor true that she’s an ex-junkie and ex-prostitute? Still, what the hell.

“What?!” Manson laughs, then leans into the tape recorder, all serioso. “Yes, I was a junkie and I was a prostitute and I enjoyed doing both.”

“She’s only a singer as a sideline,” says Erikson. “But prostitution is her first love.”

“What do you say?” wonders Manson.

Vig affects a makeshift brogue. “That she’s jus’ a wee shite from Scotland.”

Shirley Manson, 29, lives in Edinburgh, Scotland, and travels to her bandmates’ hometown of Madison, Wisconsin, for aesthetic powwows and recording sessions. It would be convenient for everyone involved if Manson relocated there, but Edinburgh has been her only home since childhood, and she’s staying, despite that most of her life there has been, in her words, “a shambles, a stream of mishaps. I never knew what to do,” she says. “I never had a sense of what I wanted to be. I completely flunked out of school. I got totally into boys and smoking and drinking and being a pain in the ass.” The opportunity to sing and play in bands “fell into my lap,” she says, “without any effort on my part.” 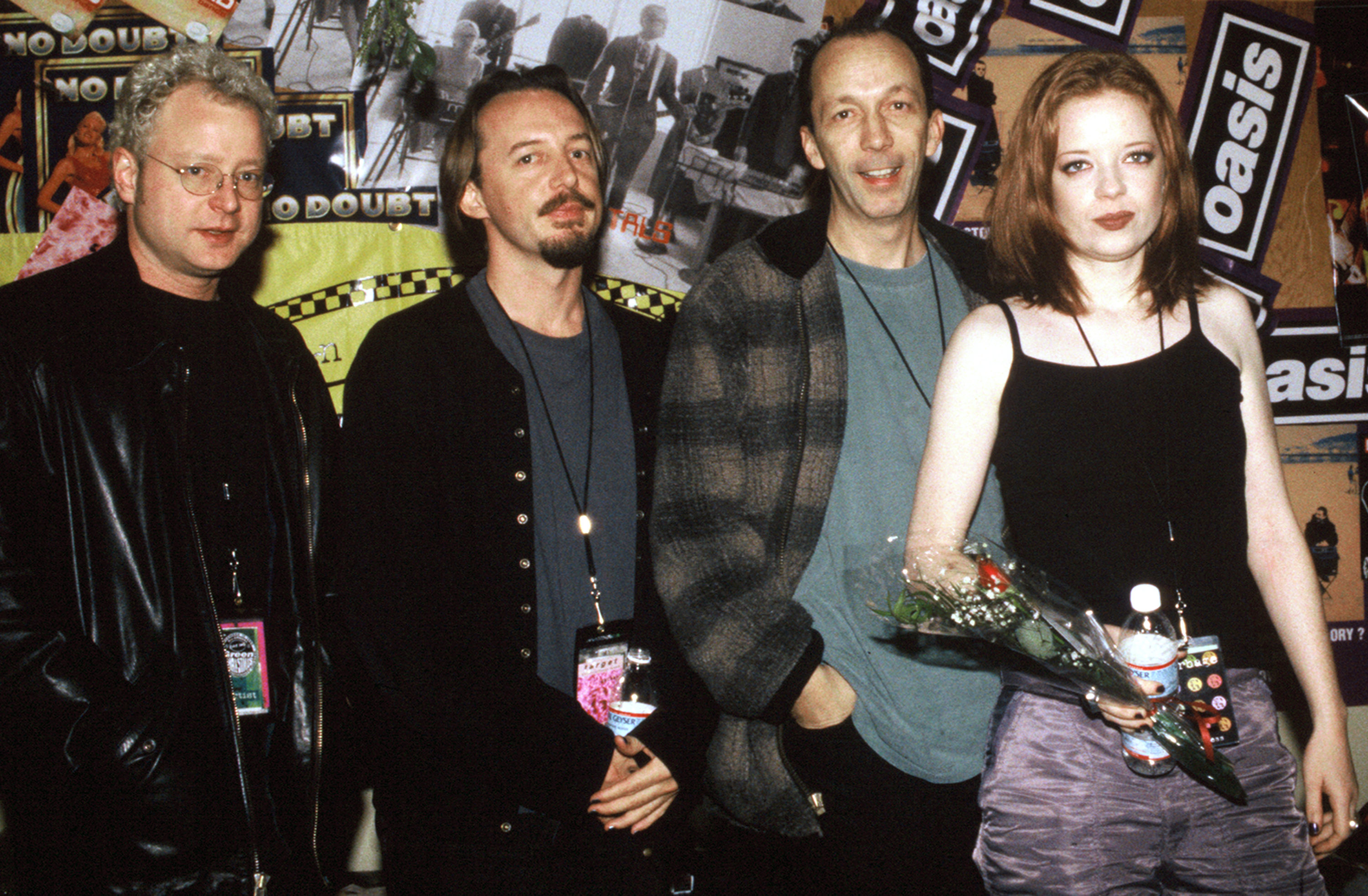 Still, Manson has managed to earn her keep playing in bands for ten years now. And it was in a video by one of these bands, Angelfish, that Vig spotted her and knew at a glance that he, Marker, and Erikson had found the frontperson for their then-unfocused musical experiments. So how much of her moody, attitude-tossing persona is pure personal expression, and how much of it is her idea of what a female rocker should project?

“Basically I’m true to myself and how I see the world,” says Manson. “But I wouldn’t wear a see-through dress because I think it would be misconstrued, and people would get off on it for the wrong reasons.”

Some Garbage fans were surprised to open last October’s Elle magazine and find a multi-page spread of Manson modeling the dresses of trendy fashion designer Moschino. “A lot of people have told me I shouldn’t have done it,” she says, “that I’m an intelligent woman and I shouldn’t be seen that way. But I say, ‘Fuck it.’ I enjoy putting on beautiful clothes and having fun. I’m totally into that girly side. And it made my mum absolutely beside herself with excitement. When you’ve spent your whole life being a loser, to say to your mum, ‘I’m going to be in American Elle magazine… ’  You have no idea…”

Garbage, or certain of its members, anyway—Vig and Manson for sure—were nervous going into this interview. When I casually mention about ten minutes in that I admire their self-titled debut album, Manson literally collapses in her chair and whispers, “Oh, thank God.” Reaction to Garbage’s remarkably self-possessed debut has ranged from admiration to, well, suspicion. The notion of three studio geeks selecting their sexy lead singer in much the same manner one might order up a video from The Box does seem a bit chilly. Pair that with Manson’s emotionally estranged, complicatedly flirtatious vocals, and the group’s subtle incorporation of techno and trip-hop rhythms, and you can see why skeptics have questioned just how dark their darkness really is. So how calculated is Garbage?

“People never believe us when we say this,” says Vig. “But we didn’t sit down and map out the blueprint of the perfect band or anything.”

According to Vig, the genesis of Garbage’s layered, promiscuous sound lies in some remixing work that he, Erikson, and Marker did for the bands House of Pain and U2 several years back. Having been given the green light to remake/remodel tracks to their hearts’ content, they wound up throwing in every musical style that even remotely interested them: hip-hop, punk, noise, techno, and so on. Afterwards, they took the leftovers home, deconstructed them, sampled them, added to them, and essentially built their debut from the magnetic particles up. It’s not for nothing that they called it and themselves Garbage. And the band’s meticulous self-consciousness carries over to their videos as well.

“When we started the band, we didn’t want to tour,” says Vig. “So videos were very important. While we were making the record we rented films all the time—”

“But we’re all very opinionated,” continues Vig, “so there were a lot of disagreements on the first two videos. I’d get an idea that the rest of the band wasn’t into—”

“Like that I should be buck naked,” says Manson.

“Shirley’s going to swing on a vine,” adds Vig.

“Spreading my legs as I come toward the camera,” laughs Manson.

Videos are, in fact, the reason Garbage have ended up in L.A. At five A.M. tomorrow they’ll be chauffeured to a downtown warehouse where the redoubtable Samuel Bayer will help them concoct clips for the next two singles, “Only Happy When It Rains” and “Stupid Girl.” The night’s still young, but not for them. Several rounds of rum and tonics have taken effect. And Manson looks worried.

“I’m feeling guilty about the Courtney, Kim, Alanis question,” she says. “Because when I was growing up I thought Kim Deal was the most brilliant woman in rock.”

Okay, I tell them, picture this: You’re standing on that same dock. This time you look out and see Trent Reznor, Billy Corgan, and Michael Stipe struggling against the waves. Again, there’s only time to save one of them. Who will it be?

The band visibly tenses up, stares off.

“Well,” says Manson very carefully, “Billy could get home by himself. I’d probably take Michael because he seems weaker to me. He’d need my help.”

“Trent would probably make it to shore okay, too,” says Vig.

“Yeah, I have the feeling that Michael can’t swim too well,” says Erikson.

They sink into an uncomfortable silence. I’m clicking off the tape recorder when, all of a sudden, Manson gets this big, sardonic grin and leans into the microphone.

“And Michael would feel the best when he’s soaking wet,” she says.