Home » Features » The Club You Don’t Want Let Into

Throughout the 1990s, corporate CD clubs like Columbia House and the BMG Music Service dumped millions upon millions of compact discs on a consumer public ready to replace their vinyl collections en masse. But with an unbelievably cheap collection of great music came contracts full of semantic trickery, double asterisks, and paragraphs in parentheses.

BMG made its name with the seminal “Buy one get 12 free” offer, before warping the deal to “10 CDs for the price of half” — meaning the purchase of one half-priced CD (discounted as such only after the purchase of multiple full-price discs from the club), earned the member 10 free discs (but only if the total cost of full-price discs purchased exceeded the full-price cost of the otherwise free discs). Both confusing and shady, but at least BMG let you choose your albums.

The Columbia House music club, quietly owned by media Godheads Sony and Time Warner, slung eight-CDs-for-a-penny — if the member bought a certain amount of music at full club prices while allowing full-price discs they did not pick to be sent to them automatically, that if not returned within 10 days, become final sale, even if the mail is cross-country and running way late. 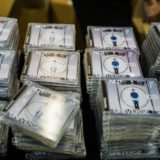 CD Sales Increased for the First Time Since 2004

Nothing in life is free. Especially CDs

CD clubs offered ever-shifting traps for all ages and tastes, the deadliest of which involved ordering and receiving free albums, not paying a thing, never canceling the subscription, then dropping off company radar. Once a given time passes, contract clauses spring to life, full price is charged for all free discs, a collection agency is assigned, and as a hard-rockin’ bonus, the member becomes prosecutable for mail fraud.

The secret weapon of both clubs was a force-feed sales method called negative option billing, a practice that a proud former Columbia House employee called “perverse” and “brilliant” during a 2015 exposé interview with The AV Club. At the time, another staffer acknowledged, “The whole business was premised on the idea…we’re going to fill your mailbox, and we’re going to keep sending unless you panic and beat us back.”

Inside the belly of the beast

To keep costs low and profit margins high, CD clubs produced their own discs to sell, some apparently of questionable sound quality. Stereophile conducted a test in 1994 in which top audio engineers repeatedly listened to both club and retail releases of the same albums, and indeed, they detected inconsistencies — different compression levels, stereo channel variances, and a noise called jitter, common to discs pressed with inaccurate mastering equipment. Actual digital frequency analysis, however, found no differences.

Larger than any retail pressing plant, Columbia House’s mammoth CD factory and customer service center in Terre Haute, Indiana, was a true sight to behold — for those authorized to pass through its steely gates. In his personal career documentary, The Target Shoots First, former company marketing manager Chris Wilcha’s 1994 home movies grant a rare glimpse of the company’s innards.

Inside the center’s main office, what looks to be at least two dozen eternally calm women field phone calls at small desks, offering elliptical responses to club members either excited or pissed off, all the while opening hundreds of incoming order envelopes and typing the details into early PCs.

Adjacent to the office, in an airplane hangar-sized CD plant, pistoned machines pump out uncountable copies of Garth Brooks albums, which are immediately packed, palletized and taken across the hanger, where college students hired on summer vacation work daylong order fulfillment jobs.

In what resembles a disinterested version of Supermarket Sweep, the students follow order printouts through an alphabetized labyrinth of 10-foot shelves full of fresh discs, grabbing the necessary titles along the way. Packing the discs while walking, they dodge one another, tape, seal and toss their package in a bin before grabbing another printout and repeating the treasure hunt.

The facility’s proud floor manager reports his packers walk between 14 and 20 miles daily “on the grid.”

Come 1995, all-day packers like these will facilitate the deification of Darius Rucker, as 3 million copies of Hootie & the Blowfish’s Cracked Rear View are created and sold by CD club sausage factories.

In The AV Club interview, a former Columbia House exec recalls, “There was an understanding back then, a lot of the people receiving these catalogs were so…middle of nowhere. That was part of the idea of it: you had to order music through the mail.”

During that quaint, pre-broadband era, many members signed contracts without any sense of suspicion or consequence, romanced by a dream deal on real compact discs. Plenty of these Middle Americans also lacked easy access to a post office, which at the time, was the only place to return unwanted CDs before incurring full-cost penalties.

The boardroom schemes were nonstop: each new monthly catalog contained subtle user agreement and policy changes, regarding which a Columbia House higher-up told Forbes, “You could criticize us for not bringing more attention to the fine print, but it was all there.” Sometimes though, no one knew the rules. Former employee Sasha Frere-Jones admitted, “When I worked there, people would say, ‘So, how does it work?’ and I would just say, ‘I don’t know. I have no idea.’”

When the music’s over

By 2003, the unraveling had begun. In a class-action lawsuit, a U.S. District Judge dropped the hammer on CD club private defendants, for what CBS News called a “price-fixing conspiracy.” A $143 million settlement was dispensed to millions of buyers, in the form of 75% discounts on full-priced club discs…which required a membership to buy. The private defendants even asterisked the settlement, conceding to award discounts only if the court record acknowledged no proven violation of member contracts.

Not only were customers getting burnt, but in their deviant hunger, CD clubs became famous for jiving even the artists whose music made them rich. All featured acts were paid reduced publishing and royalty rates on the claim that placement in company catalogs was billable advertising — this, while clubs paid the artists’ labels full rates. Such royalty shakedowns were a precursor to the floss-thin rates streaming services currently pay musicians.

Piotr Olov, a former content strategist for Columbia House, recalls, “The labels would get this enormous advance against all this product. And then, of course, that advance didn’t slide down the hill to the artists. The royalty rates were a percentage of what even the crappy major label royalty rates were at the time…basically, it is so Spotify, it’s a joke.”

The two beasts became one in 2005, as Columbia House purchased BMG and recast itself as a mail-order DVD club. Having suddenly grown a heart, the company went well out of its way to elucidate the fine points of both club’s new deals on its website, in an almost medical manner, but it was too late, the vultures had begun to gather.

It soon came to light that members had long been outwitting the clubs, creating fake accounts using multiple addresses and names in order to harvest free discs, and when running late to return full-price discs, writing “Return to Sender” on packages before returning them, dodging full-price negative option billing.

The king of all club hustlers was Joseph Parvin, who was charged with receiving 26,554 free compact discs over a five-year period, using 2,417 fake accounts attached to 16 P.O. boxes. Peddling the discs at swap meets, Parvin, perhaps the smartest man in Lawrenceville, New Jersey, bilked Columbia House and BMG for $425,000 worth of product — by their valuation, that is. Facing five years in jail and a $250,000 fine, Parvin pled guilty in exchange for a reduced charge of one count of mail fraud.

Turn out the lights

BMG CD club was ultimately put to sleep in 2009 by its parent Columbia House group, who then succumbed to bankruptcy in 2015. In addition to schemesters and lawsuits, several clear factors led to their downfall. One painful legal caveat involved clubs having to wait from three months to a year before being permitted to sell an artist’s new release. As long-time members finished stocking up on old favorites, their demand for brand new music grew, while their CD club orders shrank.

Along with Pandora and the dawn of streaming, the deathblow to CD clubs was their own unwitting devaluation of music itself. Their business model is seen today as the world’s introduction to the concept of “free music,” an idea that eventually, through CD-Rs, peer-to-peer sharing like Napster and torrent sites, bucked not only the clubs, but the entire music industry.

Though the last of the titans, BMG, was shuttered 12 years ago, its website somehow remains in suspended animation, where below a “Choose CD’s” button, a remarkably clear set of terms of service sit front-and-center, more still and steady than they have ever been.