Laura Jane Lowther is a creative pioneer living her truth and inviting everyone to join the party. The beauty of KUČKA’s artistry lies in the power of contemporary exploration in duality, emotions, and the nuances of self. An introspective yet, vibrant and upbeat approach, the globally raised producer/songwriter, bares her being within her sensory satisfying LP, Wrestling. She has a very distinct sonic palette that bridges experimental elements with a percussive/bass heavy rhythm, overlaid with a futuristic etherealness that all combine to create a complete, energetically balanced signature sound. Within the entire exploration, the composition of the entire project does not fail to showcase her ability to tell a cohesive story. The proof is seen within the way she vividly translates the full spectrum of emotions explored, through her musical expression and the choices she makes dynamically. She took a moment to chat with SPIN to talk about the making of Wrestling, collaborating with electronic pioneer Flume, and passes on wisdom to the upcoming generation of music makers. Check out her album here.

Who is KUČKA and how did you come to life? 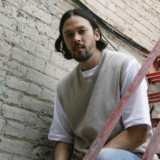 I’m a producer and singer. I started out experimenting on garage band when I was an angsty teenager and its all snowballed from there.

I love so many different styles of music, and my favourite thing to do when I’m in need of inspiration is to go down an internet rabbit hole and see where it takes me.  I love that the internet has made releasing art so accessible and I love discovering and connecting to things that feel really far away from anything that I would find in my immediate network. This makes it so hard to pin point a singular influence as I feel as though I pick up small bits and pieces from everywhere.

What does your typical songwriting/production process look like? Is there a set formula or does it consistently evolve and shape-shift along with your ideas?

It’s really unpredictable.  Sometimes it starts with a single word, sometimes its a melody and sometimes its a rhythm that I love  I’ve learnt that I have to follow the part of the track that excites me the most and allow myself to get rid of the rest.

I guess releasing ‘Wrestling’ has been a huge turning point for me.  I feel like people are starting to understand where I come from as an artist in my own right rather than just a feature on another person’s project.

2021 being a year of slow reintegration back into the world, many artists have been feeling the growing excitement in heading back to festivals, releasing new projects, touring music they were forced to put on pause – you’re gearing up to release a new album. Talk to us about Wrestling. Where did this concept begin? How did the pandemic shift this process for you?

It started about 4 years ago when I first moved to LA. I had been doing a lot of collaborative work and writing for other people before then so I was struggling to find the time to work on my own project.  I had to close myself off from sessions for a while to get used to listening to my on voice again and that really helped me feel super creatively inspired.  The record was pretty much finished by the time the pandemic happened so it only really affected the release plans and touring.  I feel like the album really works as a solitary listening experience on headphones or in a private setting, so not being able to tour it isn’t a huge loss for me as I feel like people can still connect to it in it’s optimal environment.

What many may not be aware of, is that you are no amateur at collaborating. In fact, you’ve teamed up with some of the industry’s most illustrious acts ranging from Flume & SOPHIE (rest in peace), to Kendrick Lamar & Vince Staples – How did you become such a versatile collaborator? Who did you team up with for Wrestler & what different element did they bring to your overall cohesive concept?

The main thing I always keep in my mind when working on another person’s project is that it’s their overall vision, and you are just one part of it.  If you don’t trust their vision then it’s not worth doing the collaboration.  If you try to insert yourself and control the outcome too much it’s going to cause friction and you’re better off working on your own project where you are the sole mind on it.

Tell us one of your most artistically enhancing collaborative experiences.

I always love working with Flume.  He’s always up for pushing the boundaries of electronic music and is genuinely curious and excited about other artists and where music is headed.

Reflection time. Where were you before making the album and where are you now, after completing the album?

In what ways do you wish to inspire up and coming artists/producers that are aiming to get their chance in the spotlight?

I would love to inspire people to speak openly about their personal experiences. Everyone’s perspective is unique and if you cultivate your own voice it’s the most interesting asset that you have.

What’s one piece of advice you’d like to give aspiring creatives that you either got from a mentor or that you wish you would’ve gotten?

You don’t need expensive equipment or heaps of money to create.  Start with what you have and build from there.

As we’re looking ahead, seeing the light at the end of the tunnel, how are you both planning to propel your career forward in 2021?

I would love to play some more small shows around LA. I really miss the community vibes of the Perth music scene in Australia and I would love to cultivate that more in my network over here.

Some very exciting collaborations coming up this year.

I would love to go on vacation with my family. I haven’t seen them since before the pandemic so a couple of weeks in tropical paradise would be heavenly.

Thanks for listening and I hope you enjoy ‘Wrestling’

Check out KUČKA’s SPIN exclusive performance below. For more SPIN Sessions, head over to SPIN TV.