Welcome to the second edition of Difficult Fun! Each month, SPIN will spotlight the best punk on the planet and discuss it here, with the ambition of challenging preconceived notions of what the four-letter word actually means and, ideally, entertaining readers in the process. Purists, piss off! Everyone else, enjoy.

Another month, another round of Difficult Fun. Where does the time go? Wasn’t it just yesterday that the shitshow “September 11 Memorial” Madball, Murphy’s Law, and Bloodclot gig in New York City’s Tompkins Square Park became ‘80s punks own Sturgis Motorcycle Rally COVID-19 event? (Someone tell John Joseph endangering fans is “for pussies,” to borrow The Cro-Mags man’s Cro-Magnon-like language. I cringe.) Regardless, in May, good, innovative punk endured, because good, innovative punk will always endure. Listen to some of that, below.

Brace yourself for the swell. Philadelphia’s Mannequin Pussy (now the trio of guitarist/singer Marisa “Missy” Dabice, drummer Kaleen Reading, bassist Colins “Bear” Regisford, formerly a quartet with guitarist Athanasios Paul) latest, the Perfect EP, is a triumph. (You could call it a “perfect” release, because technically, it is one.) Five songs in 14 minutes, falsettos build into thunderous screams, an expert distillation of the group’s meditative shoegaze, thrash-y punk-pop, expansive emo. If there was any fear that the band couldn’t follow up with a song as emotive as “Drunk II,” well, they wrote five. It’s “1 classic MP song. 1 pop song. 1 sad bitch bedroom song. 1 happy slut bad-bitch song. 1 Bear song,” as Marisa wrote on the band’s Twitter account in December 2020. “These songs make up our collective feelings over this stupid fucking year.” Listen, and purge it. 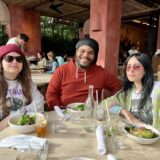 On Confines of Life, Los Angeles-via-San Francisco punks Neighborhood Brats’ third LP, no societal villainy is left in tact (environmental disaster, sexual assault, modern mundanity—name it, it’s here.) Pleasures, too, abound for fans of late ‘70s ruddy punk (“Who Took the Rain”) and ‘80s spit-y hardcore (“Harvey Weinstein (is a symptom)”). The latter is fitting—when Jenny Angelillo screams that fist-clenching scream, “What if I was a man? / This is a symptom of a greater disease / Wake the fuck up,” it’s hard not to want to join her in pathologizing systemic sexism, demanding a cure. And spare me this academic detour, but it is also a brilliant recast of the ways in which women have been written about, as if our assaults are our fault. Hysteria, eat your heart out.

Before New Orleans industrial art punks Special Interest unleashed their dystopian disco, “Don’t Kiss Me In Public,” on last summer’s The Passion Of album, scratching the itch of Nine Inch Nails fans everywhere, there was their Trust No Wave demo tape. Reissued this month and released for the first time on vinyl, it is their earliest discordant techno squawk in full raw form, acidic and angry. Diehard fans will no doubt recognize “Disco,” “Fluid (Bound 2),” “Art Walk,” and “Service” from their 2018 debut LP, Spiraling, but all listeners will be stoked to hear the menacing, fuzzed out cover of Italian new wave band Chrisma’s 1977 cut “Black Silk Stocking.” Or is that just me? This is not for the faint of heart. (Or sleeping dogs on your living room floor, speaking from personal experience.)

Blistering hardcore, turbo riffs, punishing drum fills—15 tracks, 12 minutes. Youth Attack Records’ latest, At Death’s Door, the debut from Goodbye World, is sure to top some punks’ album of the year list, and with good reason. The band is no doubt a YA supergroup, built of the best from the label’s roster: vocalist Aaron Aspinwall (The Repos), lead guitarist Jeff Jelen (MK-Ultra), guitarist Mark McCoy (Charles Bronson, Failures), bassist John Menchaca (Culture Shock, Civilized), and drummer James Trejo (Cadaver Dog, Civilized.) The apocalyptic release serves almost as a treatise on wanting to die to escape our hellish reality (Can you blame them?), which would only go so far if the songs didn’t rip: “Blood and Bone,” is a transgressive Dadaist poem about dying in a car crash on your commute, or something, the guitar solo in “I Must Be Destroyed,” is straight gasoline—and “My Body was Dead,” is the fire. Truly, Youth Attack never misses.

Enough has been written about the current moment’s flurry of post-punk revivalist bands (to which I say – is it a “revival” if the trend has lasted… years, if not decades?). Not enough attention, however, has been paid to those deeply fucked up groups who manage to articulate nightmarish darkness like a cool-mist humidifier—through arpeggiated synth, a deep bass echo, rhythms that race—meant to be breathed in. Moody Welsh band Chain of Flowers (named after a rare The Cure B-side), are masters of murk without coming across cartoonish. (I’m not the first to make the observation.) “Amphetamine Luck,” Chain of Flowers’ first new track in four years, is the perfect pairing of big drum (machine) fills and a reverbed-to-hell-and-back baritone, elevated by producer Jonah Falco (Fucked Up, Jade Hairpins, Chubby & The Gang).

Here’s what I know about U.S. Velvet: they’re from Los Angeles, a duo of ambient artist Ynes Mon (most recently, notable for teaming up with a clinician to make “music that directly alters brain states while studying its effects using EEG, measuring activity from all cortical lobes, while on LSD”) and Zahara (self-described “sugar gay synth”). “Sleep Paralysis” is their only song; it was released prior to the pandemic despite perfectly encapsulating quarantine, and I can’t stop listening to it. Maybe there’s too much goth in Difficult Fun this week, but forgive me this final sin: the post-punk duet of “Sleep Paralysis” is too delicious to ignore, like the saddest stoners you know got seriously into death rock all of the sudden. Come from the bummer anthem, stay for the world’s first and only tolerable reference to Eternal Sunshine of the Spotless Mind.

I’m cheating a bit here. Plague Survivor, a nonprofit music collective out of Denver (formerly a noise-punk band from Denver but who’s keeping track?) released its eclectic SICK CITY comp in April (it only hit my speakers in May. I’m only human, and TV is so good these days.) But it’s certainly worth celebrating now. Sixteen local bands offer sixteen tracks across experimental (noemoji), free-jazz (Cop Circles), lo-fi indie (American Culture), dark-wave (Tollund Men), hardcore (FAIM), “heaven metal” (Midwife), dark drone (Many Blessings), and many more musical styles that might not be punk, but are surely punk in spirit, and that’s good enough for me. All proceeds for the comp go to stocking community fridges across the city of Denver, and while consumerism = death, maybe consider putting your money somewhere halfway decent for once? Rectitude is a natural high.