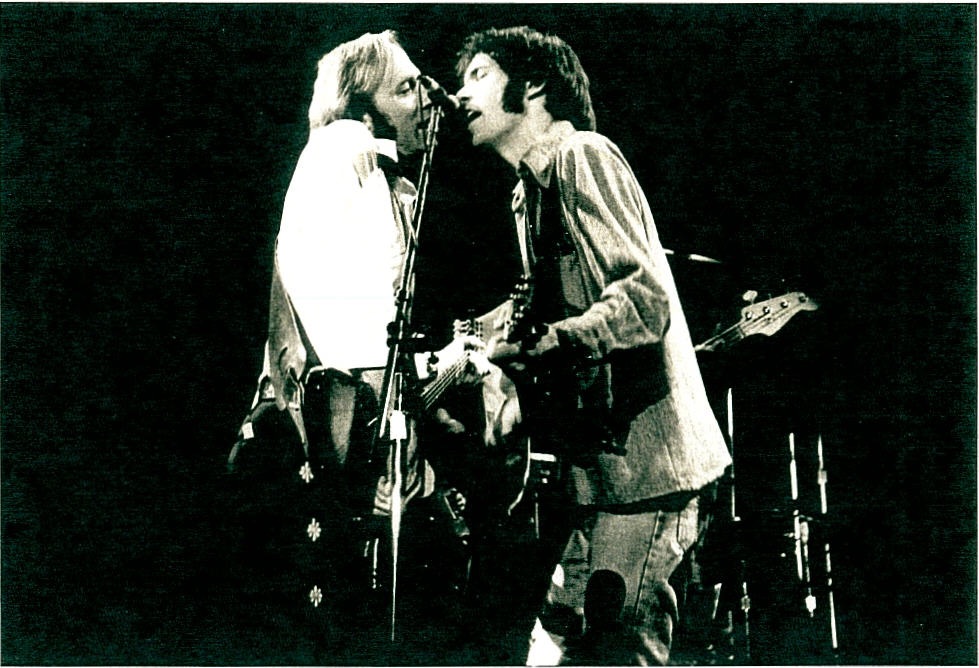 One of the most beloved albums by The Beatles was their eponymous double-disc set. It was crafted by the individual members mostly separately, with occasional cross-pollination. The seminal Crosby, Stills, Nash & Young Déjà Vu album is now seen through a similar lens, and a massive reissue box set has shed a glowing and loving light on this classic collection. Both albums reveal bands at critical turning points, and both albums were mostly collections of songs recorded with other band members far from the studio. Nonetheless, both albums remain beloved.

CSNY were the archetype for the supergroup as it’s known today. Each musician had proven their chops as founding members of bands that would eventually become instant nominees for the Rock and Roll Hall of Fame: David Crosby in The Byrds, Graham Nash in The Hollies, and Stephen Stills and Neil Young in Buffalo Springfield. Each of those bands had insufficient room for the talent exploding out of CSN or Y, so each eventually splintered. Drawn together by the heady stew of Laurel Canyon, the four made some of the most memorable music of the era. In various permutations, they would share harmonies, lovers, drugs and stages over the ensuing decades, but arguably their best moments were the ones captured in this collection.

The 50-year reissue emulates the expensive packaging the band insisted on for the original release. Nash, always the band’s ombudsman, is the only one shown not holding a gun in the cover photo. 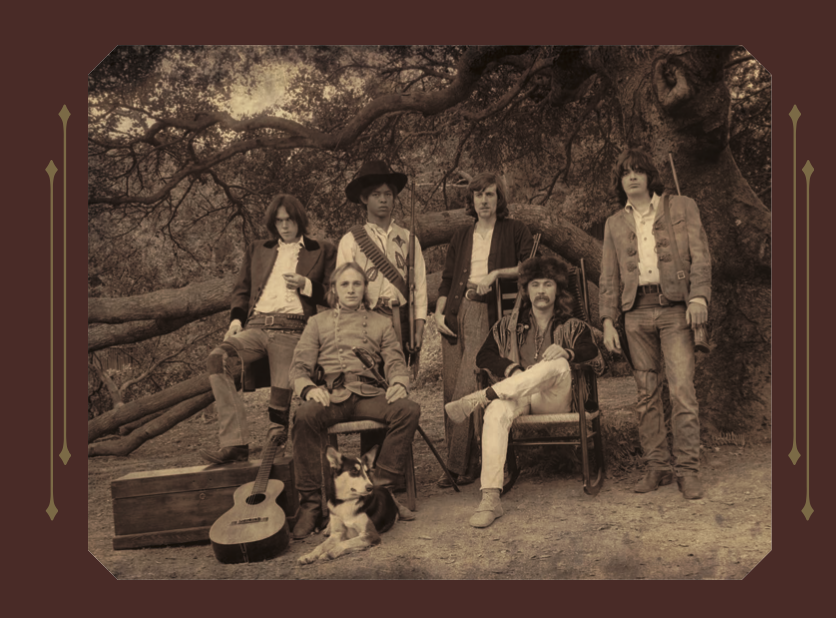 Starting with the first disc, the remastered version improves the separation of the instruments and restores the warmth of the priceless harmonies that flowed from the original vinyl release (mine now long worn through the grooves). Crosby’s title song is even more subtle, the fingers squeak on the fretboard and the spare drumming moves from center to a wider mix. The gentle acoustic picking by Stills in “4+20” is revealed to be even more complex than that which my memory contains. In an alternate take Stills is more restrained in his vocal delivery.

Much like the four Liverpudlians, this American quartet had a bounty of material on which they were constantly working. The expanded edition of Déjà Vu uncovers works in progress that later became familiar in their prolific solo material. Especially intriguing is a lengthy “So Begins the Task/Hold on Tight,” which Stills trimmed on his sterling Manassas double disc a couple of years later.

The peripatetic theme of Nash’s “Marrakesh Express” continues in “How Have You Been.” The latter was written by John Sebastian, late of The Lovin’ Spoonful. 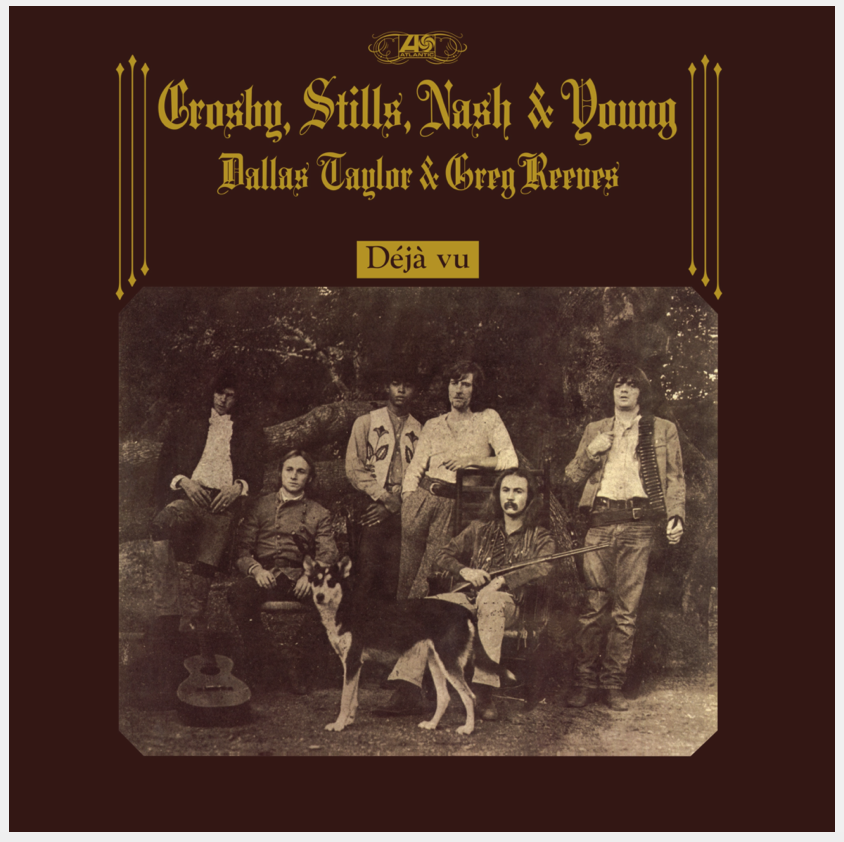 Several versions of “Woodstock” are included as well. Written by Joni Mitchell (who was left behind when her manager wanted to ensure her unsullied appearance on the Dick Cavett Show), the song became an anthem for a generation of folks. The festival itself was only the second gig the quartet ever played. Intriguingly, it is the only song when all four musicians were in the studio at the same time.

Not surprisingly, in the box set there is a dearth of additional material from Young; he has been admirably scouring his seemingly endless vaults and releasing a waterfall of unheard material. The box set is dominated by the acoustic wooden music on which the group built their reputation, but not surprisingly it is Stills who plugs in and cranks it up on several tracks. The tracks come in a bit jarring, but soon grab your ear. It was Stills who played essentially everything on the CSN debut album, and his instrumental chops were evident early.

Cameron Crowe’s erudite liner notes in the gorgeous booklet answer many questions. The most crucial discovery is how a diverse list of musicians were considered as an addition to the original trio: the aforementioned Sebastian, Jimi Hendrix and Steve Winwood were apparently each in contention. When it was suggested Young would fit the bill, there was understandable pushback. He had departed Buffalo Springfield three times. (A tiger does not lose his stripes, half a decade later he left Stills in the lurch on the ironically titled but short-lived Long May You Run Tour). Nash credits Crosby with the observation that “juggling four bottles of nitroglycerin if fine…until you drop one.” Another great insight from the liner notes is that the last song on the original album was actually the first recorded. It was always the perfect finale, amazing to think it was the first thing the four wizards brewed.

A few of the nearly 40 tracks will only be loved by purists, and it is obvious why they have not otherwise been heard before. Nash’s “Horses Through a Rainstorm” is a nice enough title, but the recording is a bit screeching. A fuller band version of the song could have been mistaken for The Hollies, not really a bad thing. The demo version of Nash’s delicate story of living with Joni Mitchell (“Our House”) is made even more intimate with Nash’s muse laughing along with his early attempts at framing up the song.

Like Easter eggs, snippets of lyrics and melodic riffs are recognized by those familiar with the quartet’s output. And like the Brits earlier, CSNY occasionally glued a few songs together to come up with something that was greater than the sum of its collective parts.

The last bit of studio time for Déjà Vu was on Dec. 28, 1969. The ‘60s were ending. The album would be released a few months later, easily the biggest seller any of the four ever had. But the album was a catalyst for a trove of great solo work in the pivotal year of 1971, and a cascade of music in the ensuing decades.

David Crosby Is Making More Noise Than Ever

David Crosby Gushes With Enthusiasm About Prospect of CSNY Reunion: “Fine With Me”