This article originally appeared in the November 1989 issue of SPIN.

On De La Soul‘s million-selling debut Three Feet High And Rising is one minute and 11 seconds of bugging out entitled “Transmitting Live From Mars.” Album filler (the Long Island hip hop trio doesn’t even rap on the cut), the song is basically nothing more than a sample of a French lesson floated over a tape loop of the first four bars of the Turtles’ 1969 pop hit “You Showed Me” with some drum beats added underneath. “Transmitting Live From Mars” is a goof, but former Turtles Flo and Eddie are not amused. They’ve filed suit against De La Soul and Tommy Boy—their record company—for $1.7 million in punitive damages. “This isn’t just a financial objection,” says Flo and Eddie’s lawyer Evan Cohen. “Flo and Eddie are genuinely upset with the way De La Soul chopped up and mutilated their song.”

Once hip hop—a music built on beats and pieces lifted from other records—began to live large in the pop charts, sampling lawsuits proliferated. It only took a few legal actions—most settled out of court, though a suit against the Beastie Boys is still pending—before the music industry realized accommodation was a better tactic than litigation. These days it’s common practice for record companies and their hip hop artists to gain prior permission for the use of major recognizable chunks of other people’s songs. For example, Stetsasonic paid a flat fee of $3,000 to sample the bass line from Lonnie Liston Smith’s “Expansions” for their defense of sampling “Talking All That Jazz.”

In the case of De La Soul, Tommy Boy worked out individual deals with Hall and Oates, Steely Dan and George Clinton for the use of their preexisting works. (Tommy Boy refused to comment on why no such deal was worked out with Flo and Eddie.) Clinton’s deal—for the sampling of Funkadelic’s “(Not Just) Knee Deep” on “Me, Myself And I”—is one cent per album and 1 2/3 cents per single, as well as half the publishing royalties. When Evan Cohen approached Tommy Boy about the Turtles sample—after Three Feet High And Rising had been released—he was offered a flat fee of $1,000. Tommy Boy claim that the use De La Soul made of the sample is so different to the ear that there is no substantial similarity between the new work and the preexisting one. Moreover, Tommy Boy’s lawyer Ken Anderson charges that in asking for such outrageous damages, Flo and Eddie are “taking the kind of position that if adopted generally would seriously hurt, if not kill [hip hop] outright.”

“That’s ridiculous,” says Cohen. “I’m not trying to snuff out an art form. They’re trying to turn it into a black versus white argument.”

But it is a black and white debate to the extent that sampling is the natural extension of the cut’n’mix DJ style at the roots of both house music and hip hop—an African-American aesthetic that values sound over sense and noise over narrative. From its beginnings in Bronx jams at parks and community centers, hip hop was interested mainly in fragments and snatches of songs. DJs would scratch bass lines, percussion breaks, grunts and textures, isolating the most pleasurable fragments of preexisting records and then repeating those moments again and again by bouncing them from one turntable to another. Whether scratching or sampling, hip hop empowers young blacks to make music simply and cheaply on their own terms.

When George Clinton was recently asked about the current trend of sampling his back catalogue (in addition to De La Soul, recent EPMD, Digital Underground and Two Live Crew songs sample P-Funk), his reply acknowledged the power of this argument: “If some poor n—– wants to get a start in music by using me, who am I to say no?”

It’s often been said that both hip hop and house represent a return to local music: New York rap, LA rap, Miami bass, Detroit techno, Chicago house, New Jersey garage music. If the corporate consolidation of the old technologies of broadcasting and musical reproduction caused local music scenes to dwindle, then the new technology of sampling has helped create a whole series of disparate, electronically enhanced communities all over Africanized America. Rather than representing a Romantic conception of the musician as an individual artistic genius divorced from society, house and hip hop music makers are valued more for their abilities to transmit the values and concerns of the digital tribes from which they spring. A classic rock record is associated with one distinct artist or group that is distantly admired by the multitude. But a hip hop classic is a break beat record that everyone can use, a record that has become communal property, owned by every single member of the hip hop nation. Hip hop turns musical consumers into producers.

However, American copyright law does not recognize the African-American attitude to the question of “Who owns the sonic spectrum?” Copyright is based on Eurocentric notions of musical property which value melody more than rhythm. A song is easy to copyright, but try copyrighting a drum pattern (Bo Diddley does not collect royalties for what is commonly known as the Bo Diddley beat, a beat which can be traced back to West African drumming). Faced with charges of copyright infringement, hip hop musicians often invoke the so-called “fair use” doctrine—”fair use” meaning that the chunk of somebody else’s music used is so small or has been so radically changed in the process of sampling that it is within the bounds of legality. A part of this defense is the once widely-held belief that there is such a thing as a “protective umbrella,” i.e., by sampling less than eight bars or seven notes you are not infringing copyright. This is a fallacy. Theoretically, a one-note sample for one second of James Brown’s “Funky Drummer” beat) could still be illegal. “Theoretically” because despite the tremendous furor surrounding the topic, sampling has not yet had its day in court. “Sampling is not copyright piracy,” says Tommy Boy lawyer Larry Stanley. “But it’s still new, it hasn’t even been litigated yet.” 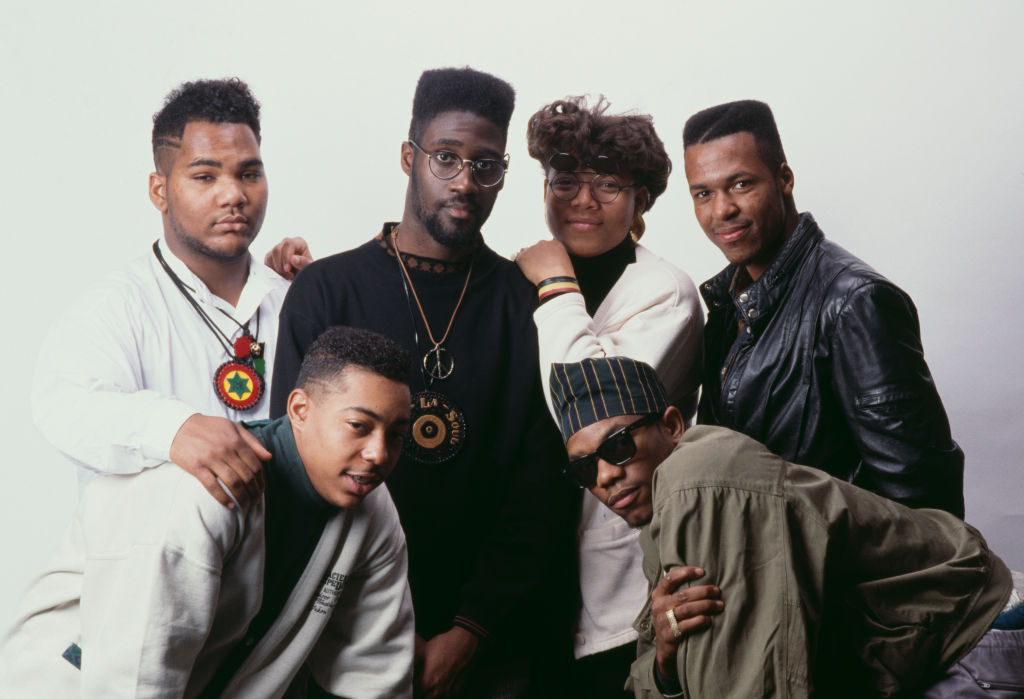 “What we do I classify as musical collage,” says Daddy-O of Stetsasonic, “the same thing that Andy Warhol did to art.” But just as 60s Pop Art had its detractors who claimed it wasn’t really art, there are those who claim that sampling isn’t really music. When R&B producer M’tume (Roberta Flack, Stephanie Mills) attacked sampling, he became the inspiration for Stetsasonic’s song defending the technique, “Talking All That Jazz.” At a panel on the legality of sampling at this summer’s New Music Seminar, M’tume took issue with the new jack samplers: “You cannot substitute technique for composition. We’re raising a generation of young black kids who don’t know how to play music. It’s like learning how to paint by numbers. If I take the numbers off and say, ‘Now paint a cup,’ you can’t. Because you learned how to do it by numbers. That’s based on someone else’s thought and creative ability.”

As the New Music Seminar sampling panel closed with questions from the floor, it became perfectly clear that the debate over sampling is not only a legal question or a clash of Eurocentric and Afrocentric views of music making but also a schism between black musicians of different generations. A black musician from the old school approached the mike and challenged Public Enemy producer Hank Shocklee: “You spend 12 seconds sampling a record that a guy spent 15 years breaking his neck to get that sound. That’s not creativity. If you want to be creative, hire the musicians and let them do the session.”

“That sounds like a loser attitude to me,” replied Shocklee. “There is a creative aspect in sampling. There is a difference between sampling and plagiarism. We’re talking 1990s here. Why should I spend eight days to get a snare drum sound like Phil Collins? He’s done it for me. I can sample that in two seconds and get onto more important things.”

R&B aficionados may not like it, but what Shocklee says is true. The older, outdated way of becoming a musician—paying your dues by sitting in your bedroom slowly perfecting your instrumental technique—is about as attractive to your average homeboy as working for chump change at Burger King. If the distance between a musical idea forming in your head and the actual sonic realization of that idea in practice is merely a matter of pressing a button, then so be it. Hip hop is merely reacting to the general fast-turnover logic of our consumer culture.

But sampling doesn’t necessarily have to lead to conflict between generations, says Daddy-O: “Sampling gives young blacks a sense of their musical heritage. Kids never knew that Jean Knight made ‘Mr. Big Stuff’ until Heavy D. did it.” Daddy-O considers digital samplers to be cultural memory banks and contends that hip hop is actually in the process of engineering a reconciliation between warring R&B and hip hop factions. Because sampling enables young black musicians to create a glossary of moments from any point in black pop history, he argues that grooves once thought of as over can be reappreciated by a new generation. It’s an argument he put to music in “Talking All That Jazz”: “James Brown was old / Until Eric and Rak came out with ‘I Got Soul.’”

But that’s not to say that all sampling is 100-percent legitimate. At one end of the scale you have producer Aaron Fuchs who made the principled decision to buy outright the original master recording of the Honeydrippers’ 1973 “Impeach the President”—a frequently scratched break beat record—for use as the backing track to last year’s Spoonie Gee record, “(You Ain’t Just A Fool) You’s An Old Fool.” And on the sleeve of his last album, Back By Popular Demand, Kurtis Blow acknowledged the source of every sample. At the other end of the scale you have the Italian disco import “Ride On Time” by Black Box, currently a favorite on dance floors in New York and London. The record features the distinctive bass line from S’Express’s “Theme From S’Express,” over which is laid a glorious, heart-stopping disco diva vocal performance sampled in its entirety from Loleatta Holloway’s house music staple “Love Sensation.” Holloway and her producer/songwriter Dan Hartman are nowhere credited on the record. And to make matters worse, the picture sleeve features a beautiful, leather-clad black woman who is definitely not Loleatta Holloway. Now that’s bare-faced cheek.