The Growing Pains of AG Club’s Fuck Your Expectations

Across their two-part album, the Bay Area group relish their rugged edges 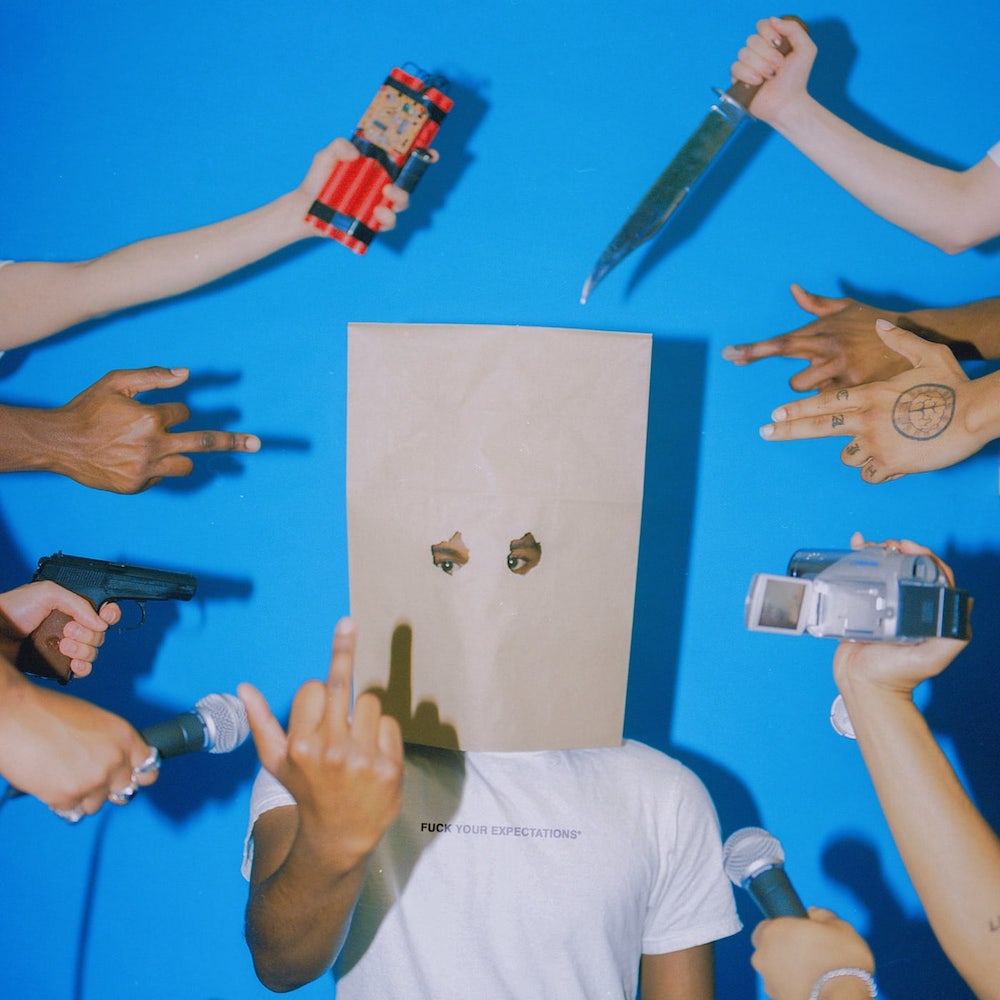 Favorably compared to A$AP Mob and Odd Future for their versatile sound and offbeat, self-made visuals, the Avant-Garde Club (AG Club) juggles listeners’ hopes and their own ambitions. On their latest two-part release, Fuck Your Expectations, the East Bay area hip-hop collective focus on their genre-bending, DIY sound and leave all judgments behind them.

The haunting horror-game-random-encounter horn that opens lead single “COLUMBIA” almost jumps out of the instrumental, and it’s one of the most recognizable sounds on part one of F.Y.E. But on the album, it’s followed not by the boastful lyrics of rapper-writer Jody Fontaine but the astounded voice of Apple Radio’s Zane Lowe.

“What is going on with this group?” he asks incredulously, replaying the song’s intro over and over to the fervent praise of his co-hosts. Eventually, they call up Jody and vocalist Baby Boy, finding them just waking up. The interlude, titled “ZANE LOWE ALIEN ABDUCTION,” offers a brief insight into how the group are handling their early fame. “I feel like I’m watching this on YouTube,” Jody says drowsily.

As the project’s title shows, the collective — whose core is also rounded out by director Manny (aka 777Media), though up to 14 people live together in the AG “Clubhouse” — are not too invested in the shifting opinions of critics, or anyone else. Another interlude, “A MSG FROM MGMT…,” flaunts an angry voicemail about the group’s work and spending habits. To the Avant-Garde Club, fan praise and the disdain of authority figures only proves their place on the cutting edge.

“MEMPHIS,” an upbeat anthem from their 2020 debut LP, Halfway Off the Porch, accrued millions of streams through Spotify playlisting. Its music video, directed in-house by 777Media, earned millions more YouTube hits, and the group went from running everything out of a garage studio to fielding calls from record labels and artists seeking features. (“COLUMBIA” itself was incited by a call from the namesake major.) However, even as the group builds on this momentum, they’ve remained committed to making music on their own terms: trying out new sounds from their diverse influences, treating originality as their greatest asset.

They further this experimental spirit through F.Y.E.‘s freeform musical showcase. Hard-hitting singles like “UGUDBRU” (with indie Virginia artist and frequent guest Sam Truth) and “Memphis Pt.2” (featuring NLE Choppa and A$AP Ferg) contrast with more pop-influenced grooves like “HOT PINK” and “A Bitch Curious.” The project’s second half is even more diverse, moving from the spacious synths and slow verses of “WAR CRIMES” to “GUAYAKI,” a Pharcyde-esque ode to the yerba mate brand.

Sometimes these shifts come within a single track: “TRUTH” pivots from Fontaine’s brash lyricism over a stripped-down, driving beat to a chant led by Sam Truth to an eight-piece from 16-year-old PG County rapper redveil over a distorted guitar solo. “I KNOW” is a droll, chorus-heavy song that fades out only to cut back into a melodic bridge and a muttered outro.

Through these frequent and sometimes far-reaching transitions, the group earnestly highlights their genre-bending style and ear for influence. Smoother cuts like “NBA Youngboy,” which has all the sad reminiscing of a summer’s end, or “HOT PINK,” where Baby Boy juggles references to the Fast & Furious franchise and One Piece on the chorus, prove the group can score a hit from different angles. However, much of the album’s two parts fall somewhere in between these musical pockets.

This grey area doesn’t seem to come by any failed effort. Instead, AG Club seemingly succeed in their titular mission: F.Y.E. frustrates even its most successful moments, moving unceremoniously to the next experiment, pushing at the edges of their own potential.