Moments after accepting the Oscar for Best Original Score for the film Soul at Sunday night’s Academy Awards ceremony, Reznor and Ross told reporters that “We [Nine Inch Nails] should be on tour but COVID has prevented that. We are planning on working on Nine Inch Nails material as soon as, probably tomorrow.”

Ten years ago, when we did The Social Network, which is the first film that we worked on, it was such a great experience. We just came out of it inspired and re‑energized, and it was working on a medium we hadn’t done before and learned so much, that we felt like, hey, let’s do a Nine Inch Nails record; let’s go on tour. And what we’ve tried to do since then is break it up where we do some rock music, we come back and do some film work. We’ve just done three pretty big films in Watchmen, Mank, and Soul in a row. 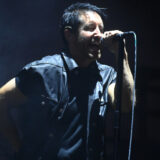 Another journalist essentially asked how the artists feel after completing each project, and Reznor said, “The real reward is doing it and knowing you did the best you could.”

Awards the NIN frontman said, “are not the motivating factor. It’s the process, it’s the exploring, learning about his beautiful gift of music and how to apply it.”

Check out the interview below.

The three collaborators also won a Golden Globe for Soul while Reznor and Ross took home an Emmy last year for their work on HBO’s Watchmen series.

Additionally, as a cool gesture to fans during the pandemic, In 2020, NIN released the new companion albums Ghosts IV: Locusts and Ghosts V: Together as free downloads.