Academia is an insular world with a limited, often privileged audience. Economic and racial disparity is the norm, and institutional change is incremental at best. After four infuriating years at Boston College, YUNGMORPHEUS didn’t want to become one of many (and too few) Black academics stymied by systemic hurdles while questioning his reach.

“You may be saying some ill shit, but who are you talking to? There’s just a gang of schmucks in here like, ‘I’m just trying to get my diversity core finished,’” the 27-year-old rapper says from his Long Beach, California, apartment. Deep inhales and the soft scrape of his lighter fill the space between sentences. “Salute to those who can do that [academic] work, but I can’t do it.” 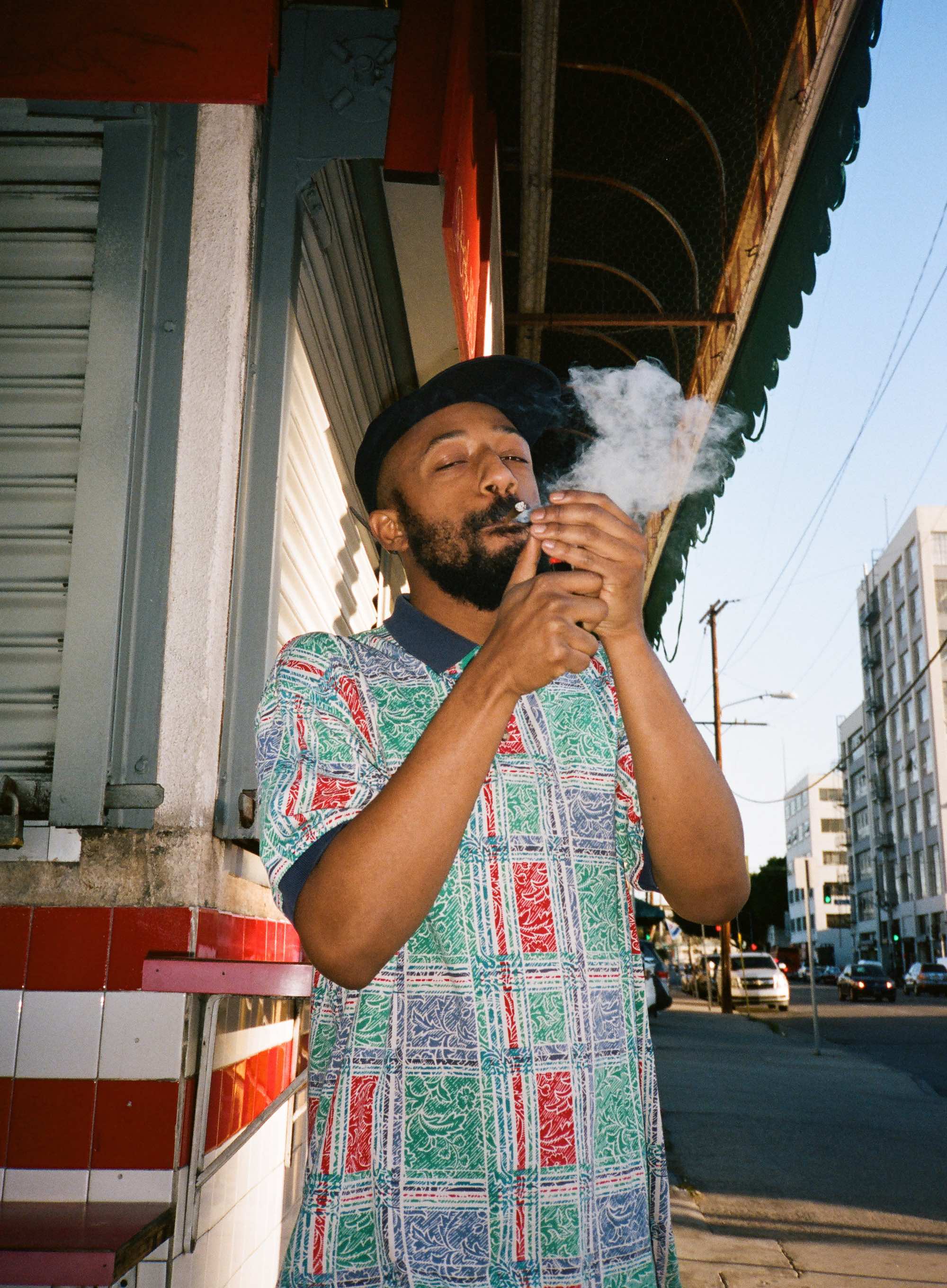 Since 2017, the Florida native has been translating conversations like this into increasingly polished, casually radical rap. Songs filled with big spliffs and blunted rage that, despite his birthplace, sound direct from New York. MORPHEUS’s low and resonant voice echoes more from the hotbox than the soapbox, his more pointed rhetoric aimed at cops and “crackers.” Aesthetically, his closest analog is lojii, the soft-spoken Philadelphia rapper and collaborator of Pink Siifu, who linked with MORPHEUS for 2020’s well-received Bag Talk.

“I never get the idea that he’s doing something unnatural,” says ewonee., the producer of MORPHEUS’s March album, Thumbing Thru Foliage. “He can come off so laid back but also have some angst.”

Released on UK label Bad Taste, Thumbing Thru Foliage has already garnered critical acclaim and rotation from renowned BBC Radio DJ Mary Anne Hobbs. Ewonee. provides beds of relaxed, modern boom-bap that pull from jazz, soul, and psych rock for MORPHEUS’s laid back, semi-fictional memoirs. Semi-fictional because he sometimes narrates killing police officers in the first person: “Fuck the fallacies, the pen create a masterpiece / Popped two in the sheriff and then I stashed the piece” (“Ride Dirty”).

“It’s catharsis. Niggas is bombarded with so much negative imagery and so much negative happenings day in and day out,” he says. “I gotta shoot some of that back out. I can’t just hold on to all of that.”

The need for catharsis began in Florida, where his father was incarcerated when he was 14. In the years before, he shuttled between Broward County and Miami-Dade, absorbing Miami bass from 2 Live Crew and thug gospel from Trick Daddy when his parents weren’t playing Ma$e and DMX. Sometime in second grade, he stumbled on GZA and MF DOOM, the two enduring influences of his East Coast-leaning sound. “Just because I’m not making booty music, that doesn’t mean I’m not from Florida,” he jokes.

In high school, with his father locked up and his mom working, breakdancing became MORPHEUS’s primary extracurricular and creative outlet. He learned Floridian dance styles and competed in local competitions. But a four-year degree seemingly afforded a more secure future.

Boston College was prestigious, offered the best financial aid package, and a chance to experience life outside of Florida. Unfortunately, MORPHEUS didn’t research the size of BC’s Black student population, which has hovered around 4% since he graduated in 2014. While earning his sociology degree in nearly all-white classrooms, he briefly joined on-campus activist groups. But he bounced when he realized members wouldn’t jeopardize their university-standing to protest for greater curriculum diversity. From then on, he spent his leisure time listening to rap and smoking in secret, hoping campus police wouldn’t make him flash his student ID whenever he ventured out at night. His white peers, of course, never had to worry about being marginalized or harassed.

“You see an interesting, ugly head of the insidiousness of oppression revealed when you’re around a gang of rich white kids who have no supervision aside from professors who are mostly leaning to their politics.”

Disillusioned with academia and uninterested in law school, MORPHEUS moved to New York for his first post-grad years. He worked demeaning day jobs where management “disrespected [his] personhood at every turn,” then spent his evenings writing lyrics and learning to make beats on an SP-404.

“A lot of the shit I was making then was very, very angry,” MORPHEUS says, referencing 2017’s Drop That Wet. “My shit is usually pretty pointed and has a focus at the system, but during those past works I was really in the thick of it.”

The delivery of MORPHEUS’s rage has softened with every subsequent project, Thumbing Thru Foliage included. But it’s still palpable, still necessary. Whether rap pays the bills or not, he hopes to reach his audience.

“In the grand scheme of things, this is for the niggas trying to do the real work for my people.”