The experimental filmmaker talks about his first feature film, Paper Shadows, that only took eight years to make... 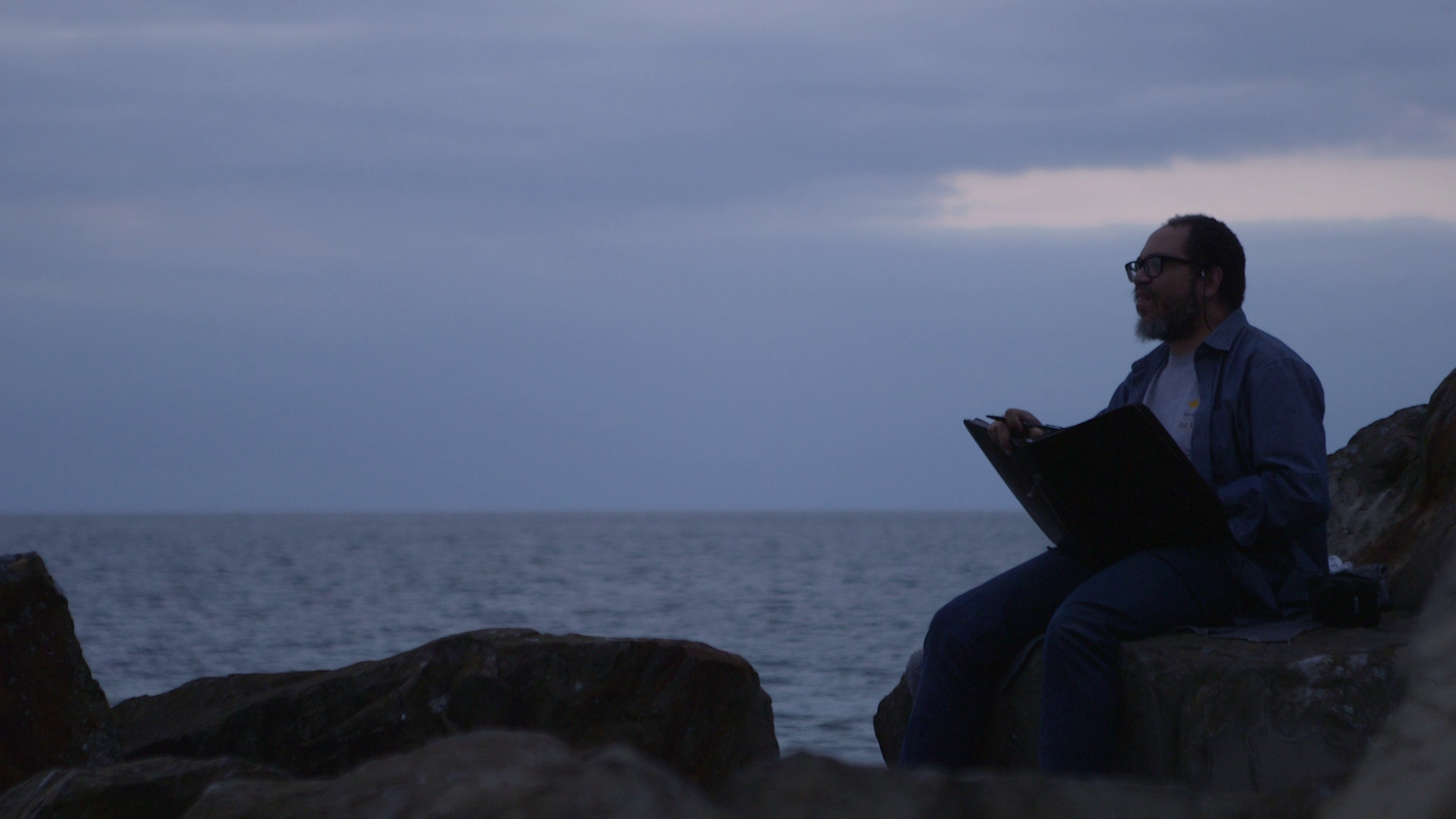 The employees of the Lakeview Cemetery, on the east side of Cleveland, watched as a busload of kids and adults dressed in bizarre costumes made their way onto the grounds. There were no funerals scheduled for that particular day. Just a man trying to bring his dream to life.

“I had told everybody to park in the back,” filmmaker Robert Banks tells SPIN about trying to film his movie Paper Shadows. “But nobody listened and they all parked right out front.

“The whole idea was we were gonna shoot there and nobody was gonna notice,” Banks laughs, causing his black-rimmed glasses to slide down the bridge of his nose. “Half the kids I brought weren’t part of the film crew, so they were running amok, climbing over headstones and sitting on mausoleums.”

That day’s shoot was supposed to be a party scene inside a cemetery. One fella showed up dressed like Dracula. “This dude also volunteered to be my AD…I didn’t ask him to do that, but he starts yelling, ‘Roll sound’, and I’m like shut up, man.” After getting a few takes in the can, the entire production was shut down after the caretaker got wise to the shoot. “Suddenly I hear, ‘who’s in charge here?’” Banks says. “She read me the riot act.”

Dracula stepped in and attempted to negotiate a treaty. No deal. “If you want to shoot here our fees start at $10,000 an hour,” the caretaker told Banks. “That’s what we charged that Marvel production.” She was referencing the 2014 Marvel juggernaut Captain America: Winter Soldier. A $170 million production. The budget for Paper Shadows wouldn’t cover a day’s worth of catering on the superhero movie.

Banks and his makeshift crew packed up their equipment and headed off the property. The chaos of that day, almost seven years later, still leaves Banks uneasy. “That was the one day that was…,” Banks says before trailing off, leaving the memory lingering in the ether. Dollars to donuts you’ve never heard of the 55-year-old filmmaker Robert Banks, Jr. Unless, by chance, you are a former student of either the Cleveland Institute of Art (like I am) or at Cuyahoga Community College, studying photography or cinema. Or you’re a frequent patron of the Cleveland Cinematheque, one of the best repertory movie theaters in the country. And, of course, if you’ve ever clocked in at the Lakeview Cemetery. Then you’re definitely aware of Mr. Banks.

Born and raised in the rough areas of Cleveland, Banks devoured cinema as a child, thanks in large part to his father, Robert Sr,. The elder Banks was known for stringing up old stag films during parties, films his son glimpsed hiding behind curtains. After a stint in the Air Force, Banks returned to Ohio to begin his filmmaking journey, something his parents encouraged from an early age. “I had cameras and a cassette recorder and I began making films,” he told Cleveland.com in 2018. “I was the only kid in the neighborhood doing it.”

For over three decades, Robert Banks has been Cleveland’s secret star; an experimental filmmaker with more than 30 short films under his belt, some of which have played in the most prestigious festivals around the world, including Sundance, SXSW and the New York Underground Festival. Yale University has even archived some of his work. Banks’ most renowned film is X: The Baby Cinema. Premiering in 1992, it’s a blistering mixed-media essay about the commercial appropriation of Malcolm X’s image, a direct response to the big-budget Warner Brothers biopic. Spike Lee was not a fan.

2020 saw the premiere of Banks’ first feature-length film, Paper Shadows. At 79 minutes, Paper Shadows is a moody and surreal story about the shared creative angst of an elderly Black man and young white female art student set on a small college campus located in a mid-tier, nearly forgotten city. Both characters act as stand-ins for their creator, a life (and strife) Banks knows all too well. The film, a true Sisyphean effort, won the Audience Award at the Chicago Underground Film Festival.

Banks spoke with SPIN over Zoom from his mad scientist-meets-cinematic hoarder loft in Cleveland’s North Coast. The walls behind him are lined with reels, strips of celluloid and gaffer’s tape. His story is one of perseverance, unwavering vision, and creating a tiny ripple in the oceanic industry of dreams.

SPIN: These types of films don’t get made anymore. And I’m talking about the entire process: shot on film, processing a negative, cutting on a flatbed editing machine all with a makeshift or even no crew at all. This is a handmade film.
Robert Banks: I didn’t set out to make an experimental film. I wanted to make an essay using elements of non-linear aesthetic, without having a traditional plot structure.

I got bad news for you: say any of those things at the Netflix offices and they will quickly validate your parking and kindly show you the door.
Unless you’re David Lynch. Or it’s couched inside a Marvel production, like Wandavision. That’s the new subversive cinema. When I first showed Paper Shadows to people, they kept making David Lynch comparisons. I was like, “This is nothing like Lynch.” But they see black and white photography, ethereal soundtrack…that’s all they know. I love David Lynch, but there were people around long before him doing this type of stuff.

Like who? Give me some of the inspirations for this film.
Ingmar Bergman. Jack Smith, Maya Deren, William Greaves, even Orson Welles, and, of course, Jean-Luc Godard.

I noticed a slight nod to Robert Downey Sr., too. There’s a great absurd scene inside a boardroom where the executives have brought in a tarot card reader to guide them through their decision process.
That’s definitely a nod to Putney Swope. [Laughs.] The great Bob Downey. He would never get a movie made today. The whole idea of that scene…if you knew the hoops you have to jump through with the panels that approve arts grants…you might as well engage in some mysticism or pagan rituals. When I submitted Paper Shadows for a grant, I was told by the panel that nobody could shoot a feature film on celluloid for $20,000. So they shot me down. And that’s exactly what I ended up doing.

Give me an elevator pitch of this movie.
[Laughs.] How LA of you… OK: I have an idea for a film, there’s no plot, however, you get to see some cute girls, a bunch of naked people. some trippy music. In fact, this is a film where you can just sit back, smoke a joint, and indulge yourself. At the same time, there’s a message about gender equality, racism and classism, and how we bond together and fight the system to create pure art. What do you think?

Honestly, that might actually play well out here. When did you actually start filming this movie?
January 1, 2011. I had the germ of the idea for this film in my head for years. One day I got a call from a friend who works at NASA, he told me they had all these boxes of expired 35mm Tech Pan film. It’s a gorgeous film stock. He brought it to me, all factory sealed, and I thought, “I gotta do something with this stuff.” I knew that I wanted the film to resemble pen and ink drawings, something that could transport the viewer to another world. So we were ready to go. I was writing the script on the fly, calling up actors, seeing who was available.

The bulk of this film was shot in 2011. Then the derailments started happening, including equipment constantly breaking down, equipment being lent out and never returned, actors and crew flaking out on me…it goes on and on. Plus, I have a job as a teacher. So, we had to stop shooting and didn’t pick back up till 2013, and even then we were still off and on. Production wrapped in late 2016. Post-production took another three years.

Most people would’ve cursed the gods and given up. What kept you going?
Making Paper Shadows was my masters program. I put myself through the wringer. When I hear people say they want to be a filmmaker I say, “you don’t know jack shit about filmmaking because you haven’t done it. Until you get on your hands and knees and bust your ass in ways you never even comprehended before, you know nothing about filmmaking.”