Judith Hill goes to Hollywood (and discovers herself) 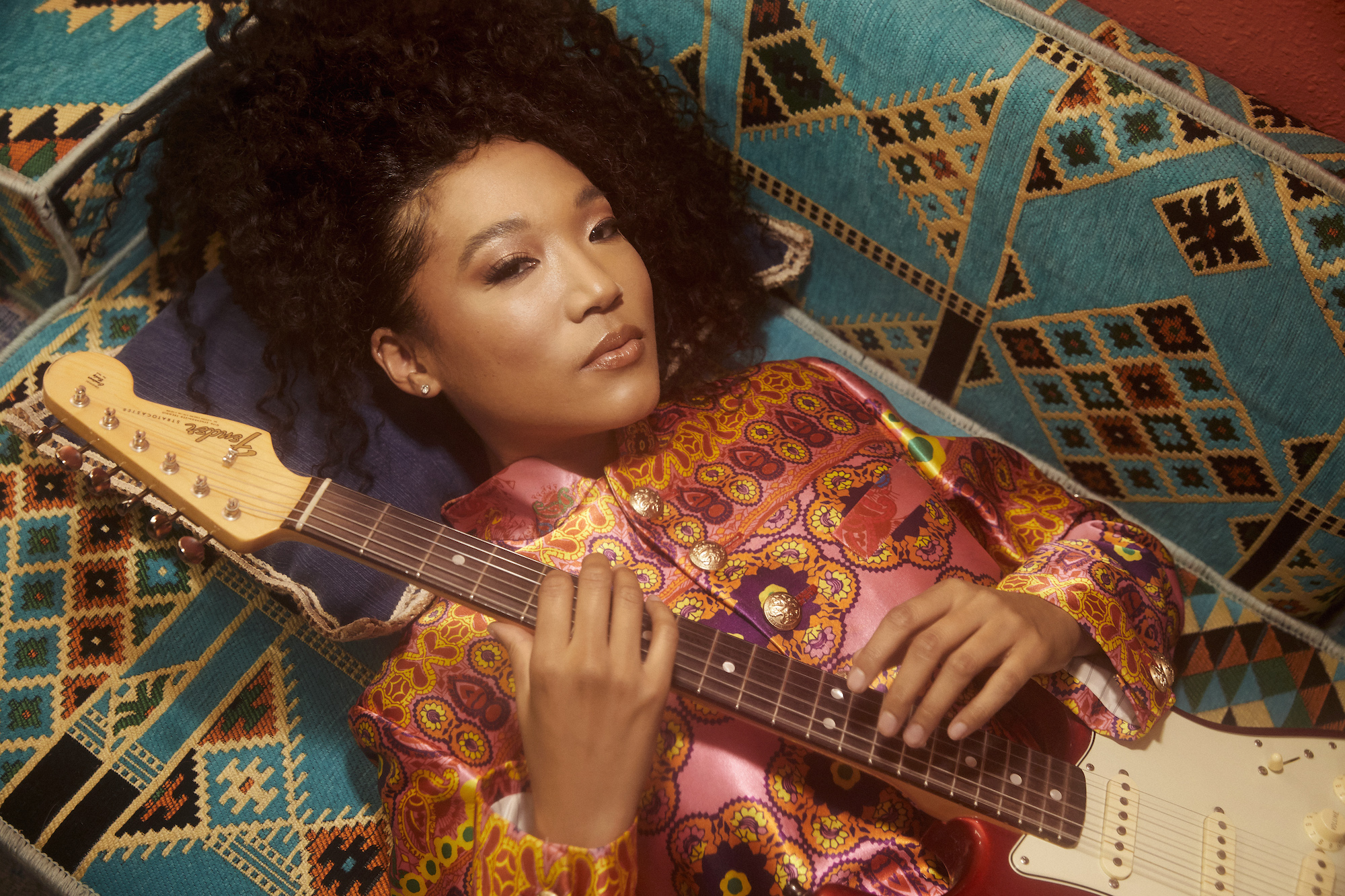 What’s a musician supposed to do during the pandemic when the stages of the world have gone silent? If you’re Judith Hill, you record the album you were born to make.

“Funk is the party in the midst of a burning fire,” says Hill, seated in a chair in the backyard of her Los Angeles home. “My music is about finding the funk and soul in the middle of sorrow. You have to find a way to dance in the fire. That’s the type of funk I feel I’m moving into.”

It’s a hot Southern California day (at least by March standards) and Hill, dressed in a light silk patterned blouse, sips from a bottle of Evian. She’s here to discuss her new album “Baby, I’m Hollywood.” She’s not here to talk about the usual tabloid dreck. Yes, she collaborated with Prince. Yes, she was on the plane with him that fateful night shortly before he passed away. When she opened up about that to the New York Times shortly after his death, she was so distraught by what she calls the “cruel” nature of the interview, she says she needed years of therapy.

Also, let’s get this straight once and for all—Judith Hill was not a Prince protégé, she was a collaborator. Vanity, Apollonia, Carmen Electra, those were protégés. Prince contacted Hill out of the blue when she casually mentioned in an interview that she would love to work with Prince. The result was the album “Back in Time,” which was released in 2015. Prince and Hill worked side by side to create the album, which includes the dope single “Cry Cry Cry.”

But for the last five years, it’s been Prince this and Prince that. And she’s sick of it. “My story was taken from me. When you find yourself in the crossfires of huge monuments (like Prince) you become a prisoner of your own story. It’s a weird feeling. Everybody else can go ‘This is my story’ and they’re free to tell it, but with me I really feel like I’m struggling to maneuver through a world that was taken from me. I’m now starting to find my way with it and starting to define my liberation. This album is the first step. I’m just now owning my story.”

Hill’s new album, Baby, I’m Hollywood is a funk-rock-soul scorcher, filled with sultry bump-n-grinders like “God Bless the Mechanic,” anthemic songs exposing what it’s like to grow up a biracial woman in these United States (“Americana”), and bitter, beautiful ballads like “When My World Is Blue.”

A lifelong resident of the greater Los Angeles area, Hill was born in North Hollywood and grew up amidst the city’s smog and gridlocked traffic. “I was essentially a Valley girl,” she says. Her Black father Robert Lee “Pee Wee” Hill was a bassist; her Japanese mother Michiko was a pianist. The pair met as members of drummer Chester Thompson’s band. Her dad was also the bassist for Billy Preston, who used to come to the Hill house regularly and play the organ.

“I was young so I didn’t realize what a big deal it was having those musicians around the house. I mean, now I’m like ‘That was fucking Billy Preston,’” says Hill, taking another swig of Evian. As a child, Hill attended an all-white Christian school where she says she was literally the only student of color, finding herself teased for her hair.

“I found myself really struggling as a kid. I really wanted friends. I wanted to be in with the girls and I wasn’t. “It’s that awful feeling when the lunch bell rings and you know that you’re going to go on the playground and it’s going to be traumatic every day.”

The bullying mostly stopped when she attended a public middle school, but she still felt like an outcast. “I’d ask myself ‘Who am I?’ I felt segregated and I found myself a lot of times just hanging out in the science room at lunch to escape the social pressure.”

As a high school junior, she attended College of the Canyons, an arts-focused high school that doubled as a community college, where she excelled at jazz and big band. She’s quick to credit her former teacher Dirk Fischer as a major influence in her musical development. After graduating high school in 2002, she enrolled at Biola University, studying classical composition.

“Classical was such a big part of my world and I wanted to be able to write the music I heard in my head.” She developed a particular affinity for French Impressionist composers, particularly Ravel. After graduating in 2006, she got a job singing background for Michel Polnareff, whom she describes as the “French Elton John.” She spent a year in France learning to sing songs in French. After a tour with Polnareff, Hill found herself back in L.A. trying to figure out her next move. She was about to take a job at The Gap, but on the same day she was due to start selling jeans, she got hired to sing with Michael Jackson, who at the time was preparing for his This Is It show at London’s 02 Arena. Although Jackson died before the shows could be performed, footage exists of Hill singing with him in a spine-tingling rendition of “I Just Can’t Stop Loving You.”

Like millions around the world, Hill was shocked numb when Jackson died in 2009. “My first big break ended up being this really sad memorial service for Michael. I mean, it wasn’t all sad—it was also a spiritual beautiful experience. But my first time really being seen by the public was singing ‘Man in the Mirror.’ Michael was just very inspiring to watch, how he worked.” While she didn’t really get a chance to know Jackson personally since the cast and crew of “This Is It” was so vast, she still says that “it was amazing working with him.”

Following Jackson’s death, Hill got back into songwriting, working with Eurythmics’ Dave Stewart for a spell, then singing backup for Stevie Wonder for about a year. She appeared on the fourth season of “The Voice,” where she was a sensation for her impassioned covers of “Always On My Mind” and “You’ve Got A Friend.” She was eliminated during the Top 8 round, which frankly, pissed a lot of people off.

“It was wild. There was so much reaction from the public to me being voted off the show. The Voice was a fun experience. I enjoyed the show because it was fun singing in it—you had a full glam team and I’m just used to singing by myself in this club. It was fun to dress up and have all the cool lights and everything.” Following “The Voice,” Hill continued to work steadily, contributing songs to a Spike Lee joint (Red Hook Summer) and featured in the Sundance-winning documentary 20 Feet From Stardom.

But that was then and this is now, and Hill is ready to tell the real story. Take the title track from her new album, a guitar-based stomper in which she sings “I’ll always be wild and free/Baby’I’m Hollywood, Hollywood/Ain’t nobody gonna do it like me.”

“When people say ‘She’s so Hollywood,’ it’s never meant as a compliment. It’s usually code for ‘she’s fake’ or ‘she represents a plastic world.’ Some of the scrutiny I was getting in the press, I was like “They don’t know me!” They may have seen me in all these high-profile things but they don’t know me,” says Hill.

“I was in a restaurant one day and I was looking out the window and I was just thinking to myself, “I’ve been here my whole life” and then it hit me, ‘Baby, I’m Hollywood.’ It just clicked. Hollywood IS me. It’s this weird metaphor for something that’s just misunderstood. I wanted to make a statement that was celebratory, not apologetic. I’m done apologizing for who I am. I’m proud of my life and where I was born and my experiences. I’m going to bring the soulfulness and the grittiness to the word Hollywood. That’s what this place IS. It’s not a plastic world, it’s just the opposite.”

Baby, I’m Hollywood recalls many of Hill’s heroes, from Betty Davis to Janis Joplin and Sly Stone. She’s not afraid to rock, unafraid to funk, and she’s done holding back.

“I’m ready to tell my story. Ready to talk about things in my world that have always been there but under the façade of Hollywood or show business. This album feels almost dangerous because I’m really emotionally naked on this album. It’s my decision now to open up to people.”