Ingrid Andress on Her Grammy Nominations, Her Love of Megan Thee Stallion and Being a Digital Therapist to Her Fans

Home » Features » Interviews » Ingrid Andress on Her Grammy Nominations, Her Love of Megan Thee Stallion and Being a Digital Therapist to Her Fans

When Ingrid Andress found out she was nominated for three Grammys including Best New Artist, it was the opposite of glamour: She was tending to her plants at her Nashville home. With no live shows and a lot of time in isolation, her life as a new artist hitting her stride has been, well, lackluster. But the singer has made it work.

Last March, Andress released Lady Like, a confessional, country-pop record that underscores Andress’ unwavering vulnerability and evocative storytelling. From musing about broken hearts to family and unexpected encounters at bars, Andress treats her music like therapy, processing her most complex emotions as a means to learn and heal.

For Andress, the key to making a strong album was remaining authentic. “I think people hear themselves in honesty,” Andress, 29, tells SPIN over the phone from Los Angeles, where she’s been staying recently to write songs. Released in 2019, her debut single — the delicate ballad “More Hearts Than Mine” — stood out for its rich narrative around the collateral damage that can come after introducing a romantic partner to your parents. “More Hearts Than Mine” climbed up the Billboard Hot Country Songs chart following its release, and shortly after Lady Like came out, Andress reached No. 1 on the Billboard Emerging Artists chart.

Andress has just continued to flourish, earning those three, aforementioned Grammy nominations for Best Country Song (“More Hearts Than Mine”) and Best Country Album (Lady Like) in addition to Best New Artist. “I’m still so new I didn’t think I was eligible or even qualified for anything,” she says. It ended up being a strong year for a new artist who was hit with an unprecedented set of roadblocks.

Ahead of the 2021 Grammys, Andress chatted with SPIN about how she discovered she was nominated for a Grammy, the success of Lady Like and her love of Megan Thee Stallion. 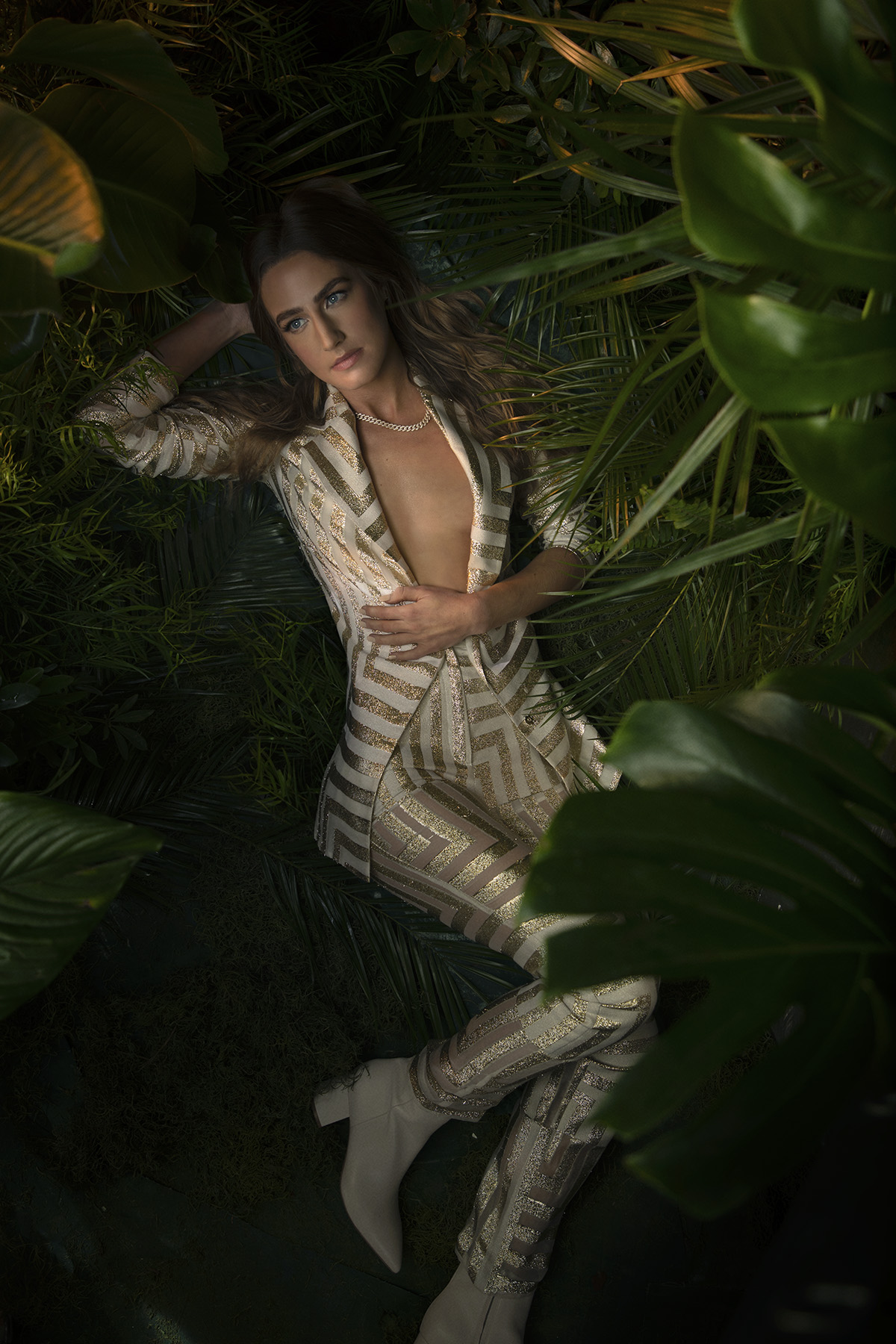 Congratulations on your Grammy nominations! Where were you when you got the news?
Ingrid Andress: I was at home in Nashville by myself. It was crazy, especially when you feel like nothing is happening. Then, you get that [nomination], and you’re like, “Oh, things are happening, I guess.”

Did you think you’d nab a nomination, or was it a surprise?
Actually, no. I forgot they were announcing the nominations that day. I was in the middle of watering my plants, which is a new thing for me — having plants — and my manager was like, “Hey, like you need to watch the live stream of them announcing.” I was like, “Oh shit!” I was not mentally prepared for that day. I was freaking out. But it definitely was like a nice end to the year that was 2020.

Why do you think Lady Like resonated so much with fans?
The only conclusion that I’ve come to after all my spare time of thinking about it is that it’s probably because it’s really honest, and I think that’s something that everybody craves from other people: honesty and authenticity. I just went for it and wrote how I felt.

With your album coinciding with the pandemic, how did that affect your plans for more music and touring?
It’s affected all of the plans. We were just starting the Dan + Shay tour when everything shut down. I was supposed to be on the road pretty much the whole year. I don’t know many new artists who have tried to launch their careers at the beginning of a pandemic. I’ve never loved following “the norm” as far as what artists are supposed to do, so it’s been fun figuring out new ways to connect with your fans without being able to actually see them.

What’s the coolest fan reaction you’ve had to Lady Like so far?
Not being able to see people’s actual reactions has been weird, but I love the DMs I get of people explaining to me how they see themselves in one of my songs in the album. People full-on tell me their relationship drama, and I’m here for it. I’m like, “Yes. I will help you through all of your issues, even though I’m not a certified therapist.” There’s something really nice about the situation that I went through and wrote about that’s relatable to so many people. It reminds you that we’re all more alike than we think.

Why do you think your debut single “More Hearts Than Mine” connected with listeners?
I think there’s something for everybody in that song. Moms understand what it feels like to have their son or daughter bring somebody home, and you want to love them as much as they do and — and dads know that. Most people have been in a situation where they have that connection with their family. Once again, I wrote it from a real-life situation. It’s hard for people not to relate to something that is super real like that. This song just so happens to open a slot for everybody in that situation. Literally every member of a family hears themselves in that song, and I think that is such a beautiful thing, which is why I songwrite in the first place.

We’ve seen a lot more country artists advocating for social and political issues. How do you feel about using your platform to do that?
Whether men or women are using their platform to speak their minds, I think it’s good. If I were to speak about something I would hope that it would be more of a unifying sentiment because I think the divide right now feels really intense. In no way, do I want to make that worse, but I think that using your platform to spread awareness is part of the gift of having a platform. It annoys me when people are like, “Stick to art. Don’t talk about politics.” I’m like, “Have you heard any influential music?” I’m here for spreading awareness.

Who were your biggest influences for Lady Like?
I think it’s from years of listening to the Chicks and Whitney Houston but also John Denver and Adele — anybody who has any emotion. I drew from those artists, and then it empowered me to have my own voice.

Have you been inspired to start another record during this time?
Pre-pandemic, if you had time on your hands, then being creative and writing came naturally. But because so much is going on, and it’s so heavy, the creative inspiration comes and goes in waves. I’ll go through spurts of, “I need to write about this right now,” which is part of why I’m out here in LA. Nobody has really told us how to deal with [the pandemic], so, I think we’re all coming up with ways to deal with it.

You’ve been songwriting for other artists during this time. Who have you been working with?
Artists from all over, whether it’s country or pop — really anybody who’s working on an album. Sometimes I get tired of talking about myself and my issues, so it’s nice to ask another artist, “Hey, what are you working through?” It’s a really interesting time to be a songwriter ’cause you’re trying to fit other artists’ voice and your voice, but then you’re like, “Wait. What? Where are we? What matters?” It’s weird going into a session being like, “Let’s write about meeting somebody at a bar.” And you’re like, “What? That doesn’t happen anymore.” Whereas most songs you are going out dancing, and we can’t do that. So, what do we write about, you know?

Who do you dream of collaborating with at this point?
Honestly, anybody. It doesn’t even have to be in the country genre. I would love a really random, interesting collab. But also I’m a huge fan of Keith Urban and Chris Stapleton. I mean, Megan Thee Stallion is amazing. We could never collab because I’m too sad for her. She does hot girl shit, and I do not. I really appreciate something that really pushes the boundaries, but at this point, collabing with anybody would be lovely because I’m so bored.

If you win a Grammy this year, what’s going to be the first thing you do afterward?
I’m sure I will take a moment to celebrate with tequila, and to me, the next step is I obviously want to release more music because I am constantly writing. But eventually when it’s safe, to be on the road would be awesome because I still haven’t really had that full experience yet. If that’s not the case, then writing. As long as I have that outlet, then that I’ll be set.