On the Eve of Something Big 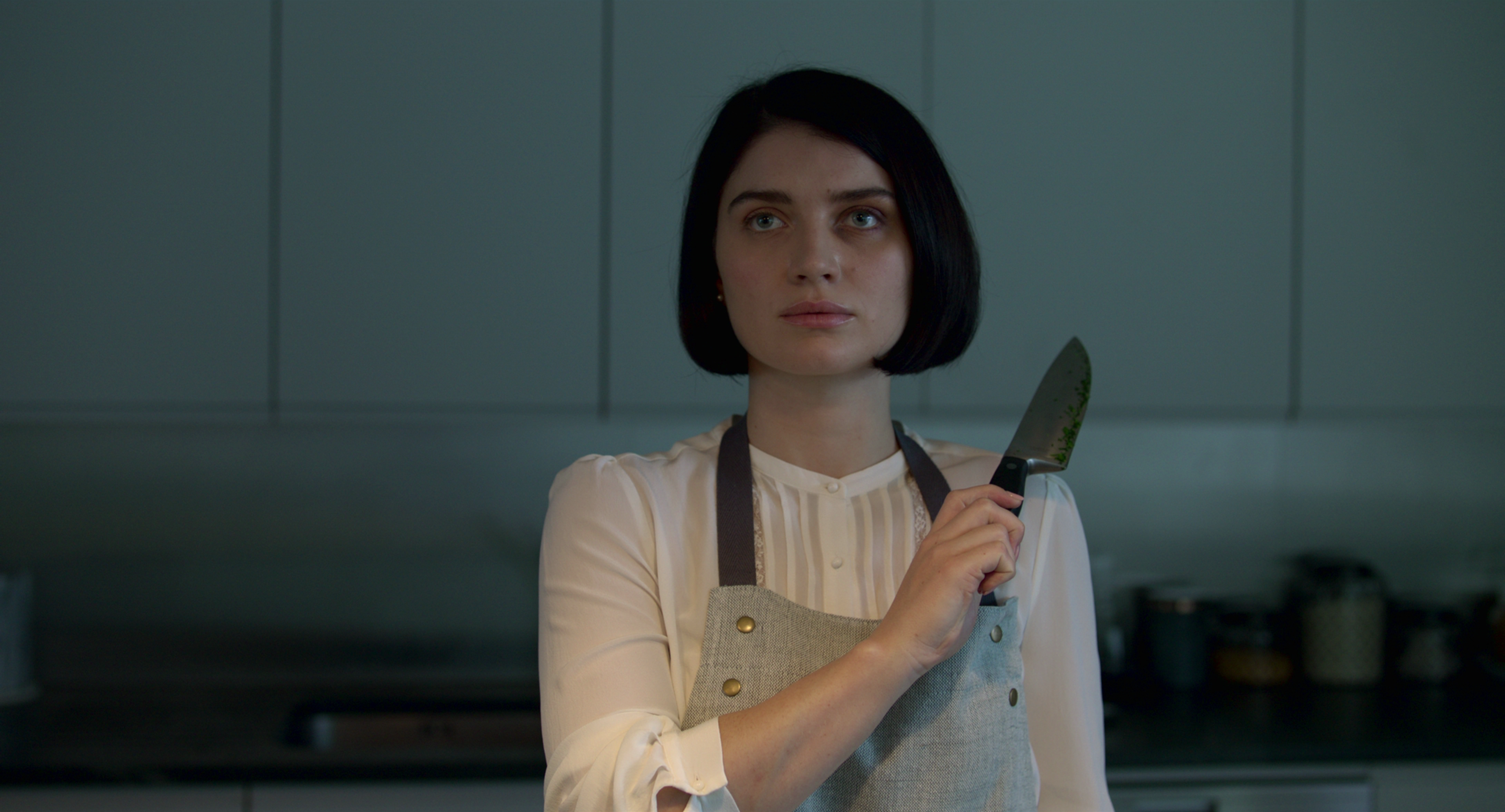 Like many of those in the performing arts world, Eve Hewson is staying in and abiding by pandemic-driven quarantine rules. But although she is physically inside, metaphorically, she’s breaking out.

A TV scheduling twist seemingly crafted by kismet has seen her most prominent television work released within days of each other: a starring role in Starz miniseries The Luminaries, set during the 1860s New Zealand gold rush (its season finale airs Sunday, March 28), and the uber-twisty Behind Her Eyes on Netflix. There is also the added bonus of the critically acclaimed 2014 drama The Knick, about opiate-fueled medical professionals in turn-of-the-century New York, just now finding a streaming home on HBO Max.

“I know! It’s so great because I loved working on [The Knick] and I’m so proud that I was a part of that show,” the Dublin-bred Hewson tells SPIN over the phone from London, reflecting on the second life of her Steven Soderbergh-directed and executive produced series.

“Soderbergh’s in a league of his own, especially shooting that series. He was really on another level,” she adds of the drama that originally aired on HBO’s sister network Cinemax.

As a result of her projects’ concurrent scheduling convergence, you can imagine that if there were still commuting rushes like pre-pandemic days, Hewson’s face would be saturated across every crowded mode of transport: her glacier-blue eyes giving off an icy stare from possible Behind Her Eyes subway posters, or her mysterious far-off look drawing you in as buses with probable The Luminaries billboards drive by.

The internet, though, is finding ways to provide a uniquely modern alternative. Her Behind Her Eyes character – the immaculately dressed Adele with that sleek chin-length bob and a penchant for chopping fresh vegetables with a very sharp knife – is entering meme territory, something Hewson spotted on social media when she sought out the sole method of measuring audience reactions during lockdown – just not via a certain breakout app.

“But people have been tweeting at me like crazy and so I’ve been searching on Twitter for people’s reactions, which I know, as a rule of thumb, you’re not supposed to put your name into Twitter because that’s bad for your self-esteem and your mental health. I’ve been doing that, and it’s been really rewarding because the memes are so funny. I’ve always dreamt of being a meme — it’s one of my goals in life,” Hewson says in her warm, Irish accent. “People’s reactions have been insane. And that’s the only kind of way I’m gauging the fact that people are really watching it because I can’t go out and really do press, or talk to people or anything. I’m just sitting at home on the couch. So, this is sort of my only way of getting good, positive feedback.” There’s a lot to unpack in Behind Her Eyes with its jaw-dropping, totally bonkers, still-processing-it ending. We’ll leave its shocking reveals for your own discovery. In the piece, though, Hewson plays Adele, an heiress, and the wife of psychotherapist David (Tom Bateman), who is being “treated” with various medications by her husband (conflict of interest, anyone?). Through flashbacks, we learn a younger Adele spent time in a mental health facility recovering from the trauma of losing her parents in a house fire, where she developed a close friendship with Rob (Game of Thrones’ Robert Aramayo – Hewson admits she’s only seen one episode of TV’s biggest series – the finale – despite encouragement from her family), a recovering heroin addict.

While Adele is usually calm-on-the-surface, the actress has to hit a number of layers in the six-episode series. There’s one particular standout scene where Adele is provoked into a frighteningly chilling and intense expletive-laden confrontation over the phone. The actress, who got her drama training (and a minor in psychology) at New York University’s Tisch School of the Arts, says that due to time constraints, she turned to a physical exercise to get the tone perfect.

“I got a bat and a pillow and I took all my aggression out on this pillow right before we’d do a take. That would kind of warm me up into sort of the aggression that I needed to find for my character,” Hewson says. “I heard about it from a drama teacher. There’s this sort of technique in acting where there are physical behaviors that you do [that] can sometimes inform your emotional state. So, doing certain kinds of movements, or even like dance moves or whatever exercises, it can help bring out certain emotions.”

With the notable show premieres over the past couple of weeks, Hewson’s career is clearly in bloom, but she’s also already amassed an enviable body of work. The Knick paired her with Clive Owen; 2013’s Enough Said saw her sharing screen time with late The Sopranos actor James Gandolfini; she worked opposite America’s dad Tom Hanks in 2015’s Bridge of Spies (her own dad is U2’s Bono), and she worked with Sons of Anarchy star Charlie Hunnam in 2017’s Papillon.

And future dream collabs? She’d love to work with Cate Blanchett, Sandra Bullock — especially if there was any kind of Miss Congeniality follow-up — or Seth Rogen. “I’m a huge, huge fan of Seth Rogen, and his pottery,” Hewson laughs, adding she’d be happy to just hang with Rogen and his wife, Lauren Miller Rogan, who’ve shown off their ceramic-crafting skills on Instagram.

“That seems to be the number one spot for the pandemic is this pottery area in their home. I don’t know if you follow him on Instagram, but I pay a lot of attention to it,” she says. In her latest role – Starz’s The Luminaries (based on Eleanor Catton’s Man Booker Prize-winning novel of the same name) – Hewson is at the drama’s center as Anna Wetherell. We’re led into the story following Hewson’s character – a young, independent woman, seeking to forge a new life and identity in New Zealand, only for things to go awry when she encounters the town’s bewitching, occult-leaning businesswoman Lydia Wells, played by another formidable actor: Eva Green (Penny Dreadful). Luck not on her side and a rendezvous with a celestial match (Emery played by Himesh Patel of Yesterday) thwarted by the female fortune parlor boss, Anna’s path quickly slopes downhill, and she finds herself prostituting, with an opiate addiction (yes, Hewson too has noted this coincidental theme across her three biggest TV pieces), and accused of a murder she has no memory of.

“What’s interesting about [Anna] is that you really have no idea where she comes from and you meet her on the boat and then she is that character,” Hewson says of the work she put in to portray a character, whose backstory is only ever hinted at. “She never talks about her past and her decision to kind of go into prostitution and the ease of that and the drugs then coming in, it’s indicated that that’s not the first time she’s a drug user, that’s not the first time she’s been a prostitute, so that was sort of a big answer for me… You meet her just as she’s just about to get off the boat in New Zealand, and she’s trying to become someone new and she is pretending to be someone that she is not, which made it interesting for me to play. That was kind of a fun challenge.”

Although the show is set in the male-dominated world of 19th-century gold mining, Hewson and Green take center stage, and their on-screen chemistry, a mixture of mutual suspicion, reluctant respect and an odd kinship, is palpable.

“There are so many layers to their relationship and that was really interesting. The show in itself is like all these men trying to take something from Anna and I guess Lydia’s trying to do that as well, but there’s also a lot of love. I think they’re looking at each other from opposite ends of experience and going, ‘Do I want to be that person,’ or ‘Does that person remind me of someone I could have been or who I used to be?'” Hewson detailed. “There’s sort of a sister relationship there, even a maternal relationship in some senses, an apprentice/mentor thing going on. So, there’s just a lot of different layers that we played with. And honestly, Eva’s such an incredible, really beautiful actor, and whatever she was giving to me, I tried to give her something back.”

And Hewson’s giving something to all of us. In the same week she had her BBC show come out on Starz on a Sunday, Behind Her Eyes premiered on a Wednesday and then The Knick’s streaming debut came a few days later.

“It’s like, ‘What the fuck is happening!?!’ But this is wonderful. I welcome it all,” she says.

The Luminaries finale airs Sunday night on Starz. Behind Her Eyes is streaming on Netflix now.