Singer-songwriter on her struggles and moving forward 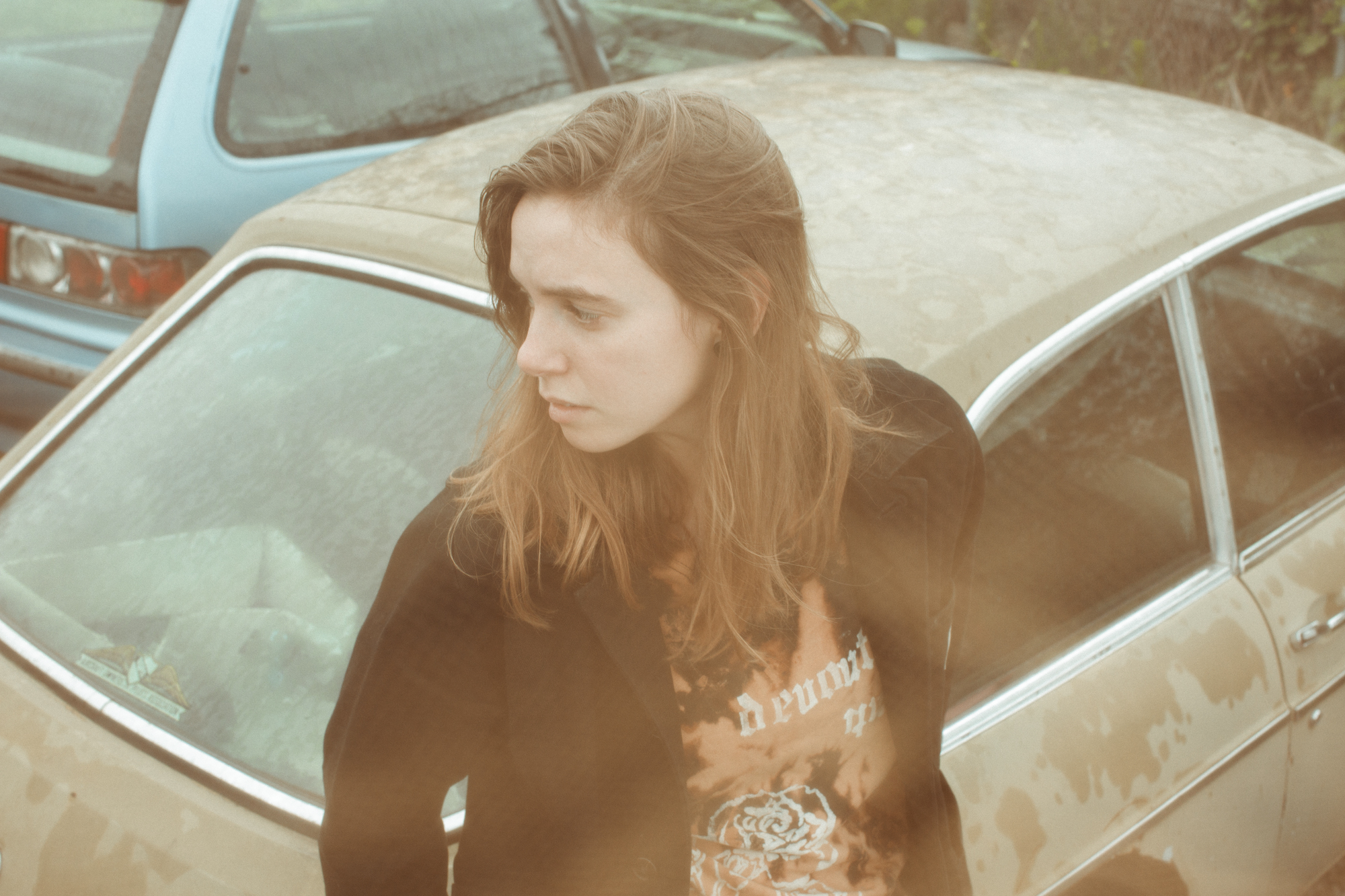 As soon as we begin what ends up being an hour-long Zoom chat, Julien Baker has decided that we’re starting with her semi-jokingly interviewing me.

She’s curious about what it’s like to go viral; she wants to know what my first viral meme was and if I consider myself to be a meme maker. The day before our interview, we’d virtually met on Twitter after I made a mittens-clad Bernie Sanders meme featuring her new album, Little Oblivions, as part of my series of Bernie memes. Baker tweeted a response to it, and fans donning portraits of her boygenius bandmate Phoebe Bridgers as their Twitter profile picture replied with variations of “hi julien.” When I bring up those interactions, she admits she’s perplexed by social media and stan culture.

“I was going to not talk about this in an interview, but the thing I hate about that culture – not those people, not those individuals – but that behavior is distressing to me for many reasons, she explains. “One, because [there are] people who will reply whenever I’m like, ‘Hey, we should think about reevaluating nationalism’ or, ‘Hey, we should try to vote for better policy’ [with] ‘I love you.’ It makes me think, like, everybody talks about being inside of an echo chamber, but my artist Twitter is for promoting myself in a very specific capacity.”

She adds, “I just sit here and just wonder about Twitter.”

The singer-songwriter’s 2015 debut album, Sprained Ankle, received critical acclaim for its gorgeous, minimalistic sound and gripping lyrics about her relationship with God, queerness, heartache, addiction, and depression. Little Oblivions, her latest album that’s out on Feb. 26, revisits similar themes with a heavier sound that introduces drums for the first time – reminiscent of her band from her teenage years, Forrister. But notably, Little Oblivions takes Baker to darker territory, confronting personal issues she hadn’t expressed previously.

However, 2019 was a difficult year for Baker. After years of sobriety, the singer experienced a substance abuse relapse, narrated in-depth in Little Oblivions. By the summer, Baker canceled her tour dates and returned to Middle Tennessee State University to finish her college degree for a semester.

“I wish I could say that I made that decision [to stop touring and go back to school] entirely on my own. But my friends, just my friends and my crew I tour with – who are the same people and who care for me very much – were like ‘you have to go home,'” says Baker. “I was really stubborn. I didn’t want to stop touring. Touring is what I’m competent at.”

The 25-year-old singer has never shied away from writing brutally honest lyrics but now she’s at a point of recognition where fans are curious about her personal life. Since Sprained Ankle’s release, Baker’s career has been on the rise, gaining a steady fanbase by being a relatable figure. But some fans aren’t satisfied with only knowing what Baker reveals through her music. It’s gotten to the extent that a group of fervent fans have even looked at Bridgers’ own music for clues on the happenings of Baker’s life.

When I ask about dealing with strangers potentially being intrusive online about what’s going on in her personal life, Baker says it’s what she thinks about the most with this record.

“Mostly, the thing that’s been taking up the most apprehensive space in my brain is how am I going to talk about the stuff I put on this record? Because I felt throughout making it this imposter syndrome. It’s not a new feeling,” Baker says. As she begins to reflect back on her journey from Sprained Ankle to Little Oblivions, her voice quiets and her gaze shifts, carefully processing her thoughts. She looks back at the Sprained Ankle days, noting that she didn’t know it would have such an expansive reach. But with a wider audience, this changed.

Baker notes that while her sophomore album, 2017’s Turn Out the Lights, was made with the awareness of a newfound fanbase, she changed her approach for Little Oblivions. She noticed that when she stopped writing songs with an audience in mind, that enabled her to “write with less self-censorship, with less anxiety around saying cringey things or making big admissions,” she says.

The caveat is that she’ll be asked by the press about the deeply personal admissions made on the album. “I could be all cryptic and refuse to answer questions about how real the songs are. But like, what would that do except for create a false mystique around something that at the end of the day is really common and mundane?” she notes. “Alcoholism, heartbreak, reevaluating your ego… These are all the things people do every damn day and fight through for their entire lives.”

In January 2019, Baker was interviewed alongside Steven Tyler and Jason Isbell for a GQ feature about sobriety. In the interview, she mentioned that at that point in her life, she had been fully sober for “six years, maybe.” But at the time of the interview’s publication date, Baker was struggling with a relapse.

“It already is personally painful to me to admit, like, ‘Hey, when that GQ article where it was me, and Jason Isbell and Steven Tyler talking about sobriety and people were @-ing me on Twitter for it, I was off the wagon,'” she confesses.

With her identity as a musician being built on being genuine and transparent with her fans, Baker felt conflicted. Now, there was information about her in the public that showed that in that instance, her personal experience was quite different from what she had shared with GQ. “That makes me feel like, okay, well, as painful as it is, I need to talk about [my experience with relapsing] in interviews, because maybe it could benefit somebody or normalize it.”

Baker is understandably wary of how she discusses her personal life in interviews. She strives for her openness about dark experiences to be helpful to others who share similar struggles, allowing them to know they’re not alone.

“I was on a phone call with [boygenius bandmate] Lucy [Dacus] three days ago talking about the difference between normalizing and sensationalizing because I freeze up in these interviews, and I get really awkward because I don’t want to provide so much information that [can be misconstrued as] using it for shock value,” she says.

Baker acknowledges that she wants to be honest about her experiences, but worries that she’s confirming the stereotype of artists “as people who are more or less always entrenched in some kind of mental health battle and usually having a negative relationship with substances.” She adds, “I want to do the right thing but I don’t know what the right thing is.”

She looks back at how anxious she felt at the beginning of her career sharing extremely personal experiences. “People would print things that I was like, that’s really graphic, I don’t remember saying that,” she recalls. She still feels that anxiety to an extent. “I’m afraid to give a bad interview because it’s like this collective public catalog reflects the person that I am. If I don’t get it right, I look like a dick, or an idiot, or just a non-compassionate person,” she says. Baker recently appeared in an episode of Consequence of Sound’s Going There with Dr. Mike, opening up about her struggles with depression and OCD (obsessive-compulsive disorder) on the podcast. During our conversation, I note that as someone who also has OCD, many of her new record’s lyrics reflect what it’s like to have the obsessive thoughts type of OCD, known as “Pure O,” by way of obsessively thinking about past mistakes. But Baker confesses that when she first listened back to it, she cringed upon hearing herself deploy the term “OCD” on the podcast.

“I don’t want to take my negative, self-destructive, hurtful behaviors that caused pain to my loved ones and assign it to this thing that I found out through a year of intensive therapy as basically a guidebook to what’s going on in my brain,” she explains. “But this very thought process, though, is an OCD thing to do – to worry about is to go down the list of possible negative interpretations of every single word I say.”

A lot has changed for Baker since 2019. She adopted a dog named Beans and has spent the past year in therapy. Baker has also been reflecting on the future and is considering getting her master’s degree. While she has no plans to discontinue her music career, Baker is looking at ways to redefine her relationship with music — including producing or becoming a session musician.

“I’d love to just help other people have someone to bounce ideas off of, I’d love to just make music. Or I’d love to be a professor and make music in my house,” she says. “But, at the end of the day, I think I just had to radically reevaluate my priorities. If I’m unsuccessful in music as a career, does that mean I stop making music? No. I had to come off the road and everything was falling apart around me and I was still making music.”