In 1995, French black metal group Blut Aus Nord released their debut Ultima Thulée, which bandleader Vindsval composed in his mid-teens. While it resembles much of mid-’90s black metal with its bitterly cold sound and budget symphonic keyboards, it hinted at the expansive vision Vindsval would eventually wield as black metal’s dominating iconoclast. He is not a nostalgist, and even his more conventional works are made with an omnidirectional glare, never dwelling on when he was a budding prodigy. Vindsval’s debut as Forhist is his most straight-ahead black metal album since Thulée; far from a retreat, it only affirms his mastery. It’s heavy on the Norwegian trances, those dizzying tremolos and constant soft double-bass pulses that are black metal’s cornerstones. Where blasts recede, keyboards bring in an understated glow. You’ve heard those patterns everywhere in black metal — Forhist is how Vindsval speaks the basic language, and it’s beautiful. In his world where frost once laid, he glows and makes the earth beneath more fertile. It’s not filled with heady ecstasies like Blut Aus Nord’s last record Hallucinogen, but Forhist still has that grasp toward the stars, steeped in wonder. There’s something to be said for someone like Vindsval, who has blown past the outer limits of black metal, executing the fundamentals at a high level and approaching them with the same enthusiasm he does his more experimental works.

(Forhist comes out on the 26th. Listen to the first two tracks below.) 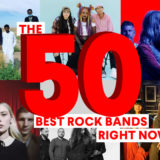 Austin’s Skeleton (one of SPIN’s Best 50 Rock Bands) is back with the Ordainment of Divinity tape, which serves as something of a preview for their upcoming second record; moreover, it’s the closest you’ll get to seeing them live before we can congregate en masse again(?). Their black-thrash gets even harsher and noisier, capturing that front-row feel of total decimation. Drummer and vocalist Victor Ziolkowski’s battery and command grow a thousandfold, and combined with guitarist and brother David’s static-drenched riff bludgeon, they bring the candle-lit DIY space to your home, smoke-machine stench and all. Raw, punky black metal tapes litter Discogs, but Ordainment has Skeleton’s live might behind it. The last track ends with artillery sounds, a sample on loop when they play shows. It fucking rules — there’s always a barrage, even when they have to tune up. Skeleton’s commitment to menace and intensity is unrivaled in Texas — or anywhere else.

One of black metal’s funniest moments is Dimmu Borgir’s instrumental track “Sorgens kammer,” which keyboardist and top hat aficionado Stian Aarstad actually lifted from the title music to an Amiga game, Agony. Black metal can get really nerdy, but it’s never topped the sheer nerdiness of stealing music from an obscure computer game where the protagonist is a barn owl. Dallas duo Cara Neir do Aarstad several times better with Phase Out, a concept album about getting stuck inside an 8-bit fantasy game. While their black metal is as tightly wound as ever, tracks like “Damnation” and “Hypogelum” imbue the wild-eyed chaos in virtual adventure. Spelunking, beast-slaying, betting the house on Chocobo races — they’re ready for it all. There’s boundless joy to match their frantic pace, and it shines through like this was the record they always wanted to make. The 8-bit electronics aren’t kitsch — they actually fit in with black metal’s tradition in making the best from limited keyboard sounds. And while post-hardcore dynamics have always been crucial to their sound, here they get infused with trip-hop beats, almost as if they’re going for “lo-fi beats to swings swords with your bud to.” Far from faceless, this is Cara Neir’s most distinctive album yet, and one of the oddest metal records you’ll hear this year.

SoCal doom unit Black Sheep Wall, named for a Starcraft cheat code, returns after a six-year hiatus with their fourth record, Songs for the Enamel Queen, with more melody and even more bitterness in tow. The melodies are disjointed and fragmented, and wouldn’t sound out of place on Hydra Head’s mid-2000s golden ages. Opening track “Human Shaped Hole” in particular strikes that right balance of shattering sludge and leads that go sideways rather than forward. Three 10-minute-plus tracks in a row to end the record seems like torture, but Black Sheep Wall is being nice this time around, as their last record ended with a half-hour, one-note repetition titled “Metallica.” No metal song in recent memory has straddled the line between stupid and brilliant with such precision. And while “Ren” and “Prayer Sheet for Wound and Nail” follow the record’s course, “Mr. Gone” is a serious psych-doom detour. Black Sheep Wall has an enigmatic touch that doesn’t involve cloaking themselves in secrecy. They offer just the right amount of confusion to make themselves a lot more interesting than many sludge and doom bands.

(Queen comes out on the 26th. Listen to “New Measures of Failure” and “Concrete God” below.)

February brings us two deadly grindcore blasts from opposite coasts. From NYC emerges Gravesend, whose debut Methods of Human Disposal is not only an early entry for 2021’s best album cover, it’s also one of the more deranged grind records in some time. They make a war metal concentrate, distilling Blasphemy’s relentless rhythms and hypnotic war grunts, already bereft of frills, into a force more bloodthirsty. Gravesend also mangle grind’s thrashier side (think P.L.F. from this column a couple months ago), and forays into noise and ominous slasher film synth only make the lights-out, barreling subway commute from hell even more rickety. Penn Station is serene compared to these guys. Socioclast, hailing from San Jose, is more stylistically unified on their self-titled debut, aiming at deathgrind in between Terrorizer and Assück. They’re the bullet train to Gravesend’s derelict subway car — more efficient, quicker on the stops, and the destination is clear. That doesn’t make the ride any less harrowing.

(Both records come out Friday. Stream selected tracks below.)