“I have honestly never been in one place for more than about six weeks in my entire life, so when quarantine started, I had all this manic energy and, obviously, America and the world are going through a lot of changes that are painful and important,” Kesha told us, on why she started her podcast, Kesha and the Creepies. “And I really wanted to talk to people because I see a lot of really volatile, aggressive conversations going on, oftentimes behind a computer screen but also, more so, there are people being so aggressive towards each other and I wanted to have a place where I could talk to people from all walks of life that believe in all different kinds of things and just have a conversation, ‘cause I think that…if we could all just have a little bit more calmer conversations then we could understand other people’s perspectives in life and…have a little bit  more compassion for each other.”

She continues. “And just trying to expand my perspective and learn…listen more. When you’re a singer you’re in a very narcissistic job—you’re very self-obsessed—and I really wanted to get to know about other people and how other people’s brains think, what they’ve gone through and it’s just been really fun to explore other people and I just think it’s expanded my consciousness, by getting to listen and talk and explore. It’s been so much fun.” 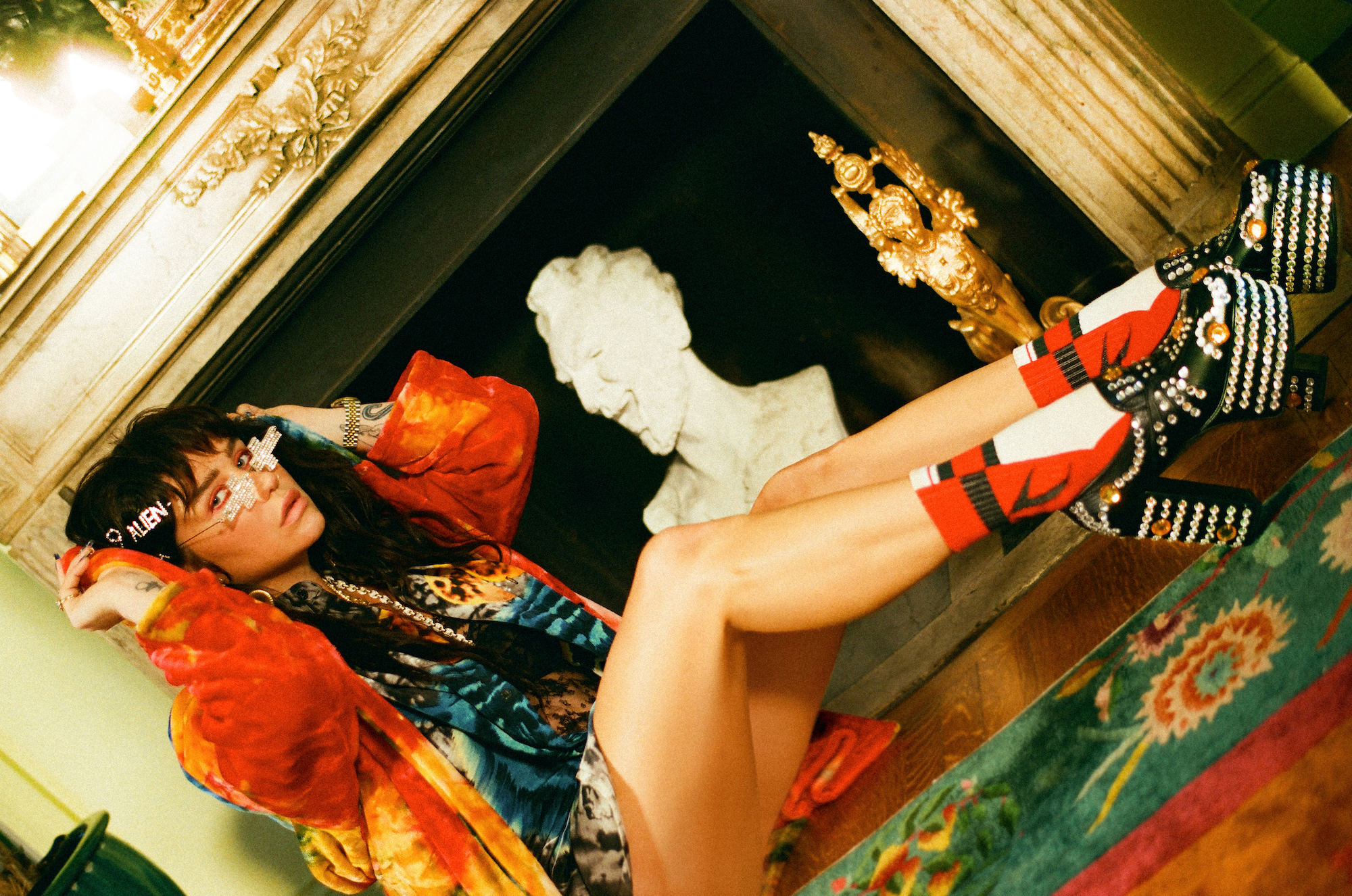 “Kesha and the Creepies” launched last November with—who else?—macabre welcome-to-my-nightmare rocker Alice Cooper. She’s explained the unexplainable with the likes of “Hollywood Medium” Tyler Henry, Whitney Cummings, Demi Lovato, Dana Carvey, Laura Jane Grace, and, recently Oberon Zell (a.k.a. Wizard Oz). “I talked to a fucking Wizard! He made unicorns in the 80s!” she told us. “This guy is the most amazing human being. He’s just one of the most amazing people I’ve ever had the pleasure to talk to.” To hear a step-by-step guide on how to make unicorns, or any of these out-of-this-world episodes, be sure to tune in.

Her new single “Stronger”, a collab with Dutch DJ Sam Feldt, is an empowering, moving tour de force. “That song was specifically me talking to myself,” she says. “Like with “Rainbow”, with ‘Stronger’, a lot of times when I went through difficult moments when I felt defeated, I write a song to myself. It’s kind of like, Bitch, pick yourself up. You can do this, you got this. And I wrote that right after I tore my ACL, so I had to relearn how to walk. It was just a very humbling and painful experience. And I just remember being like…Okay, I’m gonna make it through. And I did. And I wrote that song five years ago and so, it’s kind of serendipitous timing that it came out now, because I’m hoping that it’s helping people feel not alone. And that we all have really shitty days, and have stuff we go through that sucks. It will make you stronger. You just gotta fight through it.”

Here’s a day in the life of the magical and indomitable force known as Kesha.

Every day starts with On a good day, it starts with me doing transcendental meditation in bed.

Breakfast consists of I can’t cook for shit, so it’s whatever my boyfriend decides he wants to make for me. But, today I was lucky and I got avocado toast.

To get going I always have to see or test a body of water, it’s kind of my OCD tic. I have to see water and touch it, at least once during the day. The ocean, a river, a waterfall, a lake, a pool—just any body of water. I have to put my body in water once a day, or else I get actually sad. I’m a Pisces, and a Pisces as fuck, so I feel like I should be living underneath the water, so I just need to visit it once a day.

I don’t feel dressed without I have really low standards! During this time, it’s kind of just “whatever” goes. If you’re waking up and you’re living and feeling okay, I think you’re winning, so… I don’t really necessarily need clothing to feel dressed.

But I’d really love to be Touring and on stage, because I miss my fans so much. I always knew I was really lucky and was grateful for my job and my fans, but these past 12 months has put it into perspective…I realized my fans give me my entire life purpose.

Book I’m reading I’m actually re-reading this book called Many Lives, Many Masters by Brian Weiss. It’s such a good book. It was one of the first books I ever read that kind of just like…blew my mind. And I buy it for everybody.

I don’t know how anyone ever Is a mean douchebag.

If I had to play one album on repeat, it would be Right now I’m revisiting Raw Power by The Stooges. But for a long time it would also be The Idiot [by Iggy Pop] or it would also be [Bob Dylan’s] Nashville Skyline. 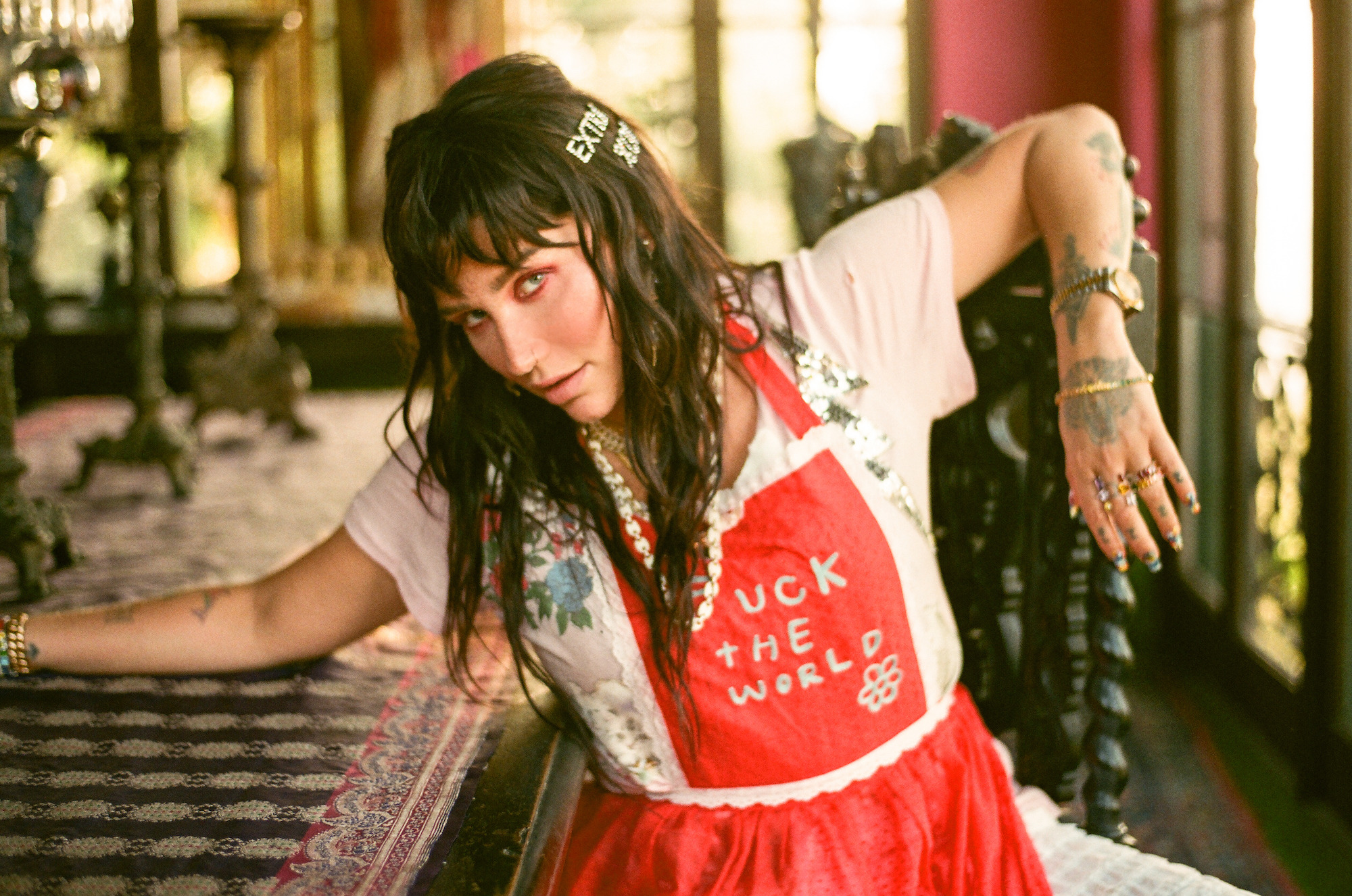 The perfect midday consists of Either writing a good song or seeing some sort of aquatic life at the beach. I just saw a seal and a shark, so I’m having a really good day.

To help get through the day I need To create something.

Not a day goes by without speaking to my mom.

My daydreams consist of Going to Japan.

In a perfect day, in a perfect world Right now I think it would be to ease tension between people and get to the root of systemic racism and have equal rights for all people, and for everyone to express their emotions freely and have the support to feel understood and less aggressive towards themselves and others.

I’ll always fight for Equality for all people. ‘Til the day I die.

Currently in love with I’m currently trying to fall in love with myself. I think that relationship’s the most important. But I’m forever in love with my cat. Mr. Peeps is the love of my life. He also won ‘The Best Cat of the Universe Award’ on Billboard.com. So, it’s confirmed, he is the best cat in the universe.

Hoping to make time to watch I feel like I’ve watched every cool movie and then re-watched them during quarantine!

By my bedside I always have A really cool lamp that is in rotation. I have a lamp obsession, I collect lamps. Currently there is a pair of lamps from the 1920s that are chartreuse and velvet.

To help get through the night I Stay up late, I’m usually up ‘til about four in the morning…so, I just enjoy being awake at night, I feel very comfortable in the darkness. I usually smoke a little weed and eat candy.