His music rarely sounds depressing — despite the groans of the modern prog-rock community, he’s just as likely these days to channel Abba as Gentle Giant. But he does tend to explore the dark corners of the human psyche, from the ultra bleak conceptual framework of Porcupine Tree’s 2002 LP, In Absentia, to the tragic real-life story that inspired his 2015 solo LP, Hand. Cannot. Erase.

If anyone could expertly channel the despair and division of the pandemic/Trump era, it’s this guy. And the songwriter’s perfectly titled new LP, The Future Bites, does traffic in the paranoia and general anxiety of our current dystopia. But Wilson finished writing the project in 2018 — it just happens to feel like an ideal soundtrack.

“Somebody said to me earlier, ‘You’re very lucky that your album is so relevant,'” he tells SPIN. “I said, ‘It’s not really luck, is it?’ There’s some kind of synchronicity going on.”

Wilson fully wrapped The Future Bites in January 2020 — and he was eager to release the album, which widens his already massive canvas to more deeply explore modern, beat-driven sounds. But he had to table his excitement, pushing back the project by over six months. Still, with each passing week, the songs only felt more “relevant and prescient.”

He recently spoke to SPIN about that thematic resonance, shattering the preconceived notion that he’s only a “prog” artist and, well, evil spirits. 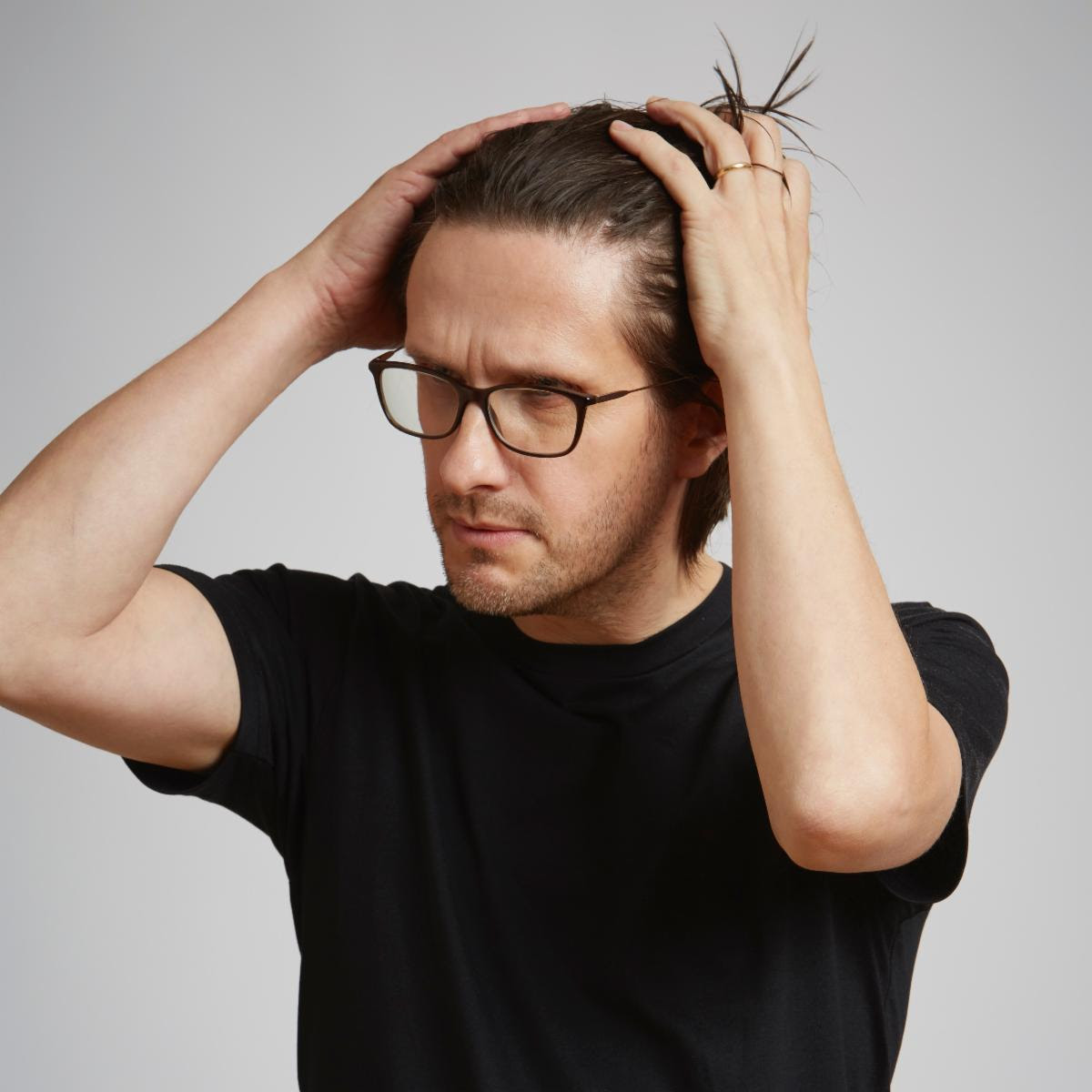 SPIN: Take me back to your mindset when you were writing The Future Bites.
Steven Wilson: That was a strange, depressing time [in Britain] because we were right in the middle of the ‘Brexit’ hoo-hah. And it was right in the middle of the Trump administration, which affected everyone on the planet. I wasn’t feeling particularly optimistic, so I started to write these songs about how the future was not looking as rosy as it should have. I was writing about how our sense of self and identity had been affected by social media, by the politics of hate. There was an unbelievable amount of belligerence online at the time about any subject: Brexit, Trump, Boris Johnson, anything. The album came out of that feeling.

Now the world seems even bleaker. How have the pandemic and the horrifying events of the last year affected you creatively?
I have started a couple new projects, but I stopped writing about the [same kind of subjects] on Future Bites. I feel like I wrote the album I should have written now two years ago. [laughs] I wonder if it’s too close to home now. The stuff I’ve been writing the last year or so has more of a sense of escapism. You turn on the news, and it’s almost too much as it is.

After you pushed back this album, you had a lot of time to sit with these songs. That can be dangerous for a songwriter and producer since there are infinite tweaks you could make. Did you revise anything?
It’s the first time — and it will probably be the last time — that I’ve ever had the luxury of going back to an album I thought was finished six months later and have an objective listen. By the end of the 18-month [creative] process, it’s hard to look at it as anything other than a science project. It’s like, you don’t really hear the music anymore. What you hear is, “Is that backing vocal [panned] over too much to the right side?” But I was able to put the record away for six months and then approve a test pressing of the original vinyl edition. I thought there was one thing terribly wrong with it: The last track was the wrong tone to end the album with, so I replaced it. It made me wonder how many records, if I’d had the opportunity to do that, I’d have made changes to.

That brings to mind Kanye West, who famously kept tweaking 2016’s The Life of Pablo and re-uploading the songs. It makes you think, “Is the album format now this living and breathing thing?”
I kinda like that idea — that an album these days, because of Spotify, can be in a constant state of flux. I wonder if it might be possible to approach making a record with that kind of philosophy in mind. So many of the really interesting innovations in modern music are coming from the urban music world. It’s a shame that so [few] are coming from rock music, which I think is largely disappearing into a marginalized niche — much like jazz before it. I suppose what you’re talking about is an extension of remix culture, isn’t it? A song can be endlessly reworked and remixed. But now we’re in the realm of the album itself, which was always cast in stone. Now it’s liquid.

The Future Bites sounds much more current. Given how often people try to pigeonhole you as this retro prog guy, did that encourage you to push further into contemporary sounds?
If my previous albums are guilty of something that I don’t particularly like, it’s a sense of nostalgia. [2017’s] To the Bone was kind of nostalgic for the great era of experimental ’80s pop. My earlier albums were very rooted in the ’70s conceptual rock world. My first solo album was like an homage to shoegaze and post-punk. This time around, it was a very conscious decision: “This record has to sound like it only could have been made now.” I don’t like to repeat myself. I don’t like the [misconception] that I’m a generic artist. I’ve always kicked against that idea.

Part of the problem is that my most successful records come from that tradition. I started my career in a synth-pop band, No-Man, but for whatever reason, that wasn’t very successful. Porcupine Tree, which started as a little side project, began to take off, and that was more rooted in classic rock. So I became known as someone who made classic rock music and progressive rock and conceptual rock. As a consequence of that, I started to get a lot of invitations to work with other bands in the same tradition, like King Crimson and Opeth. For a long time that pigeonholed me in that particular genre. I always thought of myself as quite eclectic— someone who’s just as much at home making ambient or drone or noise music or pop. It’s not like I set out to upset people who thought of me as making classic rock. But I was aware that this would move the goal post. People might finally start to understand that you can’t easily put [my music] in a box.

You’ve always been very hands-on in your music: producing and playing multiple instruments. Yet you usually surround yourself with these elite musicians. The Future Bites seems to be the most “solo” of your solo records.
You’re right. I don’t think I’ve made a more solo record since the early Porcupine Tree records, which were completely just me on my own. This relates back to what we were talking about — I was trying to get away from classic rock tradition. Over the last five or six years, I kinda fell out of love with the muso aspect I had in my band for awhile. I loved having these extraordinary musicians, like Guthrie Govan, who’d often be given free rein to solo and show what they could do.

But I didn’t want that this time. I wanted a very streamlined, direct record — doing away with those classic rock tropes. I don’t think you hear soloing at all in modern pop or urban music. Sometimes I feel it’s a shame there isn’t more of a signature of the musicians. But at the same time, I also love that music continues to evolve and things become old-fashioned. I’m sure musicianships and soloing will come back one day. But right now, it seems a modern pop album would not have those elements. The music I was listening to didn’t have those elements.

One of my favorite songs on the album is “King Ghost.” There’s a reference to what sounds like “sceocca.” Is that the actual word? Where did that come from?
I have absolutely no idea. I know It’s an Old English word. Like a lot of songwriters, I often sing nonsense when I’m working on songs, just to get the melody out. “Sceocca” was just a nonsense word I came out with. Maybe I read it somewhere at the time. I just became attached to the poetry of that little section.

I went down a rabbit hole online, and the definition seemed to have something to do with evil spirits. I thought, “Hm, ‘King Ghost’ / ‘evil spirit’ — maybe there’s a connection there.”
Let’s have a look online. “An evil spirit” — ah! “An evil spirit of demon.” You’re right! I didn’t know that. How beautiful is that? I’m going to pretend, in my next interview, that I knew all along.

I love the idea of an instrumental mood informing a gibberish lyric, which then creates this cyclical writing process. How often does that happen for you?
It just happened right now, didn’t it? I had no idea, but now I find out [sceocca] is perfect. It’s a magical thing. A lot of people talk about certain artists being geniuses: Dylan, McCartney, Lennon. But all of those artists have made terrible records too. No one completely understands the songwriting process because if they did, they’d never write bad songs. Robert Fripp says this thing about “genius,” which I love: “There’s no such thing as genius. Genius is a spirit that temporarily visits someone before moving on to someone else.” He said the spirit of genius visited King Crimson in 1969 and then moved on to whoever else, Fleetwood Mac. I love the idea that genius temporarily inhabits someone and then gets bored and moves on.

Genius, one might say, is a sceocca.
There you go! There you go. [Laughs.]