Home » Features » Altered State » The Tracks of My Years

The more I listened to Billie Joe Armstrong’s cover album No Fun Mondays, the more it dawned on me that Billie Joe, despite the p-rock trappings, is really a power-pop guy and his choice of tracks to cover really underscores where his heart is.

When I spoke with Billie Joe, he confirmed my instinct about pop and punk being more closely aligned than many might think. Billie Joe is living proof of that theorem, illustrated perfectly as he walked me through the album’s tune stack.

It only makes sense that an album catalyzed by a pandemic should kick off with “I Think We’re Alone Now.” The song, written by Ritchie Cordell and an uncredited Bo Gentry, was a huge hit for Tommy James & The Shondells in 1967. The song’s narrative is truly cinematic. it’s a record you can, in a sense, see. It charted again 10 years later for Berkeley’s own power-poppers the Rubinoos (who are still at it, after more than 50 years) and again 10 years after that for the shopping mall-promoted ingenue Tiffany. Billie Joe’s version showed up during the early days of the pandemic. “The pandemic wasn’t politicized yet,” he says. “When I covered ‘I Think We’re Alone Now,’ it seemed there was an ‘all in this together’ attitude. I recorded it to make our fans happy because the Green Day 2020 tour was being postponed.”

While “I Think We’re Alone Now” is something of a pop standard, the next track isn’t well known. It’s “War Stories,” from Belfast band Starjets, whose original charted in the UK in 1979. Like Billie Joe and Green Day, Starjets were “a little bit punk, a little bit pop” and would go on to share bills with both the Bay City Rollers and Stiff Little Fingers. Billie Joe admits, “I’m a power-pop nerd. I like to dig around for more obscure bands. Starjets put out some killer singles and their ‘War Stories’ feels influenced by the Clash. Great song!” 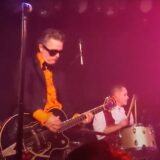 The Bangles’ 1986 hit “Manic Monday,” written by Prince, sort of serves as the album’s title track. Billie Joe confirms “’Manic Monday’ is the reason I started No Fun Mondays,” originally his series of cover song posts on YouTube. “My sister turned me on to the Bangles before this hit came out.” In reference to Prince, he admits, “I love ‘The Paisley Underground’ from the ‘80s — Green on Red, The Three O’clock and I remember MTV talking about Prince writing the song.”

The track on No Fun Mondays that initially grabbed my attention is “Corpus Christi.” No, it’s not about the corpulent former New Jersey governor. It’s a seminal San Francisco punk song, full of blood-soaked Catholic imagery, by The Avengers. I saw the band, fronted by Penelope Houston, open for the Sex Pistols at Winterland and later invested in their four-song EP, produced by the Pistols’ own Steve Jones and released in 1983 on White Noise Records, a label in which I had a stake. The Avengers’ guitar player was the late Jimmy Wilsey who went on to work with Chris Isaak and came up with that sinewy and sexy guitar lick in “Wicked Game.” “I did some work with Penelope several years ago; she’s great and Jimmy is one of the best guitar players ever. The Avengers were one of the best punk bands. I’m proud that they’re from the Bay Area,” he says of the song.

Billie Joe recorded “That Thing You Do,” as performed by the Wonders in the Tom Hanks-directed film of that title, in which Isaak plays Uncle Bob. See how everything is interconnected here?  The song, performed by the actors who played band members, was written by Adam Schlesinger of Fountains of Wayne, who succumbed to the coronavirus very early in the pandemic, giving the music community a tragic reality check. “Adam Schlesinger was a great songwriter; he will be missed. Fountains of Wayne are such a good band with great songs,” remarks Armstrong.

There’s an Italian language song, “Amico” — meaning “friend” — which is the most obscure of all of the No Fun Monday covers. It was written as “Keep away From Other Girls” by Burt Bacharach and Bob Hilliard and first recorded by Helen Shapiro, Britain’s homegrown equivalent to Brenda Lee. “Green Day has an amazing fanbase in Italy and a couple years ago I went to visit my ancestors’ village, a town called Viggiano. I was looking for a song to sing in Italian and I found ‘Amico’ — my dedication to Italy,” he said.

Things get decidedly upbeat thereafter with Kim Wilde’s “Kids in America” from 1981 that features the anthemic “Whoa-oh” chorus. Kim’s dad Marty was an early Brit rocker and he and her brother Ricky produced the record.  Billie Joe is well aware that “’Kids in America’ has got to be one of the best pop songs ever written. The lyrics fit perfectly with the melody. That chorus is huge. Ricky Wilde was also a glam rocker from the ‘70s who put out some great singles.”

Stiv Bators, the Ohio-born punk rocker fronted the Dead Boys and Lords of the New Church, put out some records on the Bomp! label under his own name between tenures with the two bands. Billie Joe caught wind of “Not That Way Anymore” when his friend, punk ‘zine publisher/roadie/drummer Aaron Cometbus put the track (and its B-side “Circumstantial Evidence” ) on a compilation tape more than 25 years ago. He recalls the first time he ever heard Stiv was his performing “Open Your Eyes” with Lords of the New Church on MTV’s 120 Minutes.

“That’s Rock ‘n’ Roll” was Shaun Cassidy’s follow up to “Da Doo Ron Ron” in 1977 and even as a five-year-old, Billie Joe was aware of it. “My sisters listened to Shaun and we used to bop around to ‘That’s Rock ‘n’ Roll,’ such a great single!”

“Gimme Some Truth” finds Billie Joe admitting, “I didn’t know that John Lennon actually wrote that song until much later.” The version he knew was Generation X’s. (Remember Ritchie Cordell and Bo Gentry, the guys who wrote “I Think We’re Alone Now?” They wrote “Mony Mony” which Gen X’s lead singer Billy Idol scored a big hit with after he left the band. Try to keep up.)

“I thought the song fit really well considering the crazy year and the bat shit crazy election that we had this year. Between cable news and social media unrelenting shit being thrown in our faces every single day, it was nearly impossible to shut it off. ‘Gimme Some Truth’ couldn’t be more true for the times that we live in.”

“Whole Wide World,” produced by Nick Lowe, made Mojo’s list of best punk songs of all time.” Billie Joe suggests “it’s a song for dreamers,” recalling “the first time I ever heard the song was when we opened for Die Toten Hosen in Germany and they played it live. I guess it had an impact on me.”

“Police on My Back” is indelibly identified with the Clash as it’s a key component of the band’s Sandinista! album but was written by Eddy Grant of “Electric Avenue” fame for the Equals, one of Britain’s first interracial bands. “I recorded it after the George Floyd murder,” Billie Joe says, “but I didn’t put it out. I thought it would’ve been tone-deaf to put out the song at the time. A white guy singing about police on my back would have been in bad taste at that moment, so I held out for later.”

The album’s last track is “A New England,” a Billy Bragg song that starts off with the line I was twenty-one years when I wrote this song/I’m twenty-two now, but I won’t be for long—exactly how Simon & Garfunkel’s “Leaves That Are Green” begins. It was later recorded by Kirsty MacColl with additional lyrics. Billie Joe is well aware of both versions, “This song is the perfect thread between a love song and a protest song. Phil Ochs and Billy Bragg are the best at this, and I made sure to tag Kristy MacColl because her version is so iconic.”