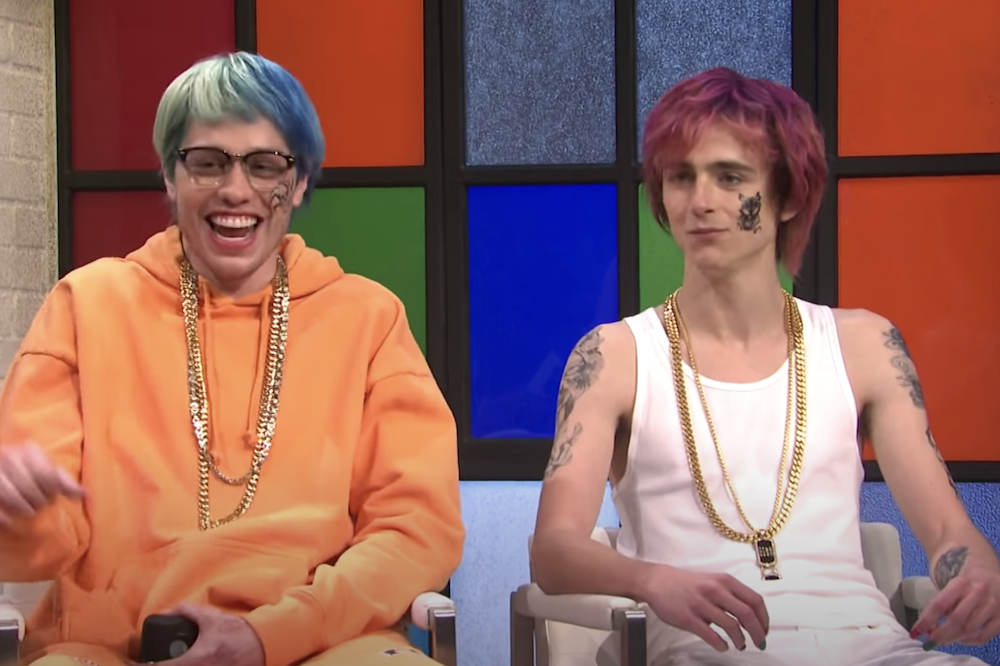 Timothée Chalamet played hosting duty on Saturday Night Live this weekend, and one of the episode’s memorable moments came at the expensive of SoundCloud rap.

In the sketch, Chalamet and Pete Davidson play Guaplord and $mokecheddathaassgetta, two rappers who broke the record of most streams on SoundCloud with 3 billion. They join Queen Latifah (played by Punkie Johnson) and Questlove (played by the actual Questlove) in an XXL Rap Roundtable hosted by Nunya Bizness (Ego Nwodim).

While the other two guests give smart, thoughtful answers to the questions at hand, Guaplord and $mokecheddathaassgetta have trouble forming full sentences and respond to everything with “yeet” (which also happens to be the name of their record-breaking song).

After citing “Fall Out Boys” and “the car rats” (Kia hamsters) as their influences, the duo performs its hit and Questlove slaps Davidson after he starts singing about how his mom never loved him.

“No! You don’t sing like that on a rap record man!” Questlove yells. When Chalamet tells Questlove to chill, he rips the pick out of his hair and slaps him with it. It’s glorious.

Watch the sketch below.

Bruce Springsteen and the E Street Band was the show’s musical guest and played two songs from the Boss’s latest album, Letter to You: “Ghosts” and “I’ll See You in My Dreams.” Watch those performances here.

Watch the Trailer for the Netflix Mötley Crüe Biopic The Dirt