If music does indeed possess the healing powers so often ascribed to it, who better than four “masked” musical super-heroes to kick the dumpster fire that is 2020 to the curb? Slayer might be louder and meaner, U2 more spiritual, but for a feel-good rock ‘n’ roll all nite and party every day ethos that can help put the last 10 months in the rear-view, it’s KISS for the win.

KISS guitarist/singer Paul Stanley promises that “if there’s a way we can kick 2020 in the ass with an eight-inch-heel to say goodbye to it, let’s do it!” Stanley is speaking from pre-Christmas band rehearsals in Los Angeles, conducted under “very strict COVID regulations.” The quartet is readying for a New Year’s Eve show that’s extravagant even by KISS standards. The global livestream concert is taking place at The Royal Beach at Atlantis Dubai and will see Guinness world record attempts during the show for the largest-ever pyro display.

Of course, it takes more than one person to make this happen: The event will be filmed with more than 50 cameras in 4K and 360-degree views, [safely!] employ between 400 and 500 people and will be available globally with a 1080p Livestream and ticketing powered by Tixr. Some lucky revelers will have hotel rooms with balconies overlooking the concert event. 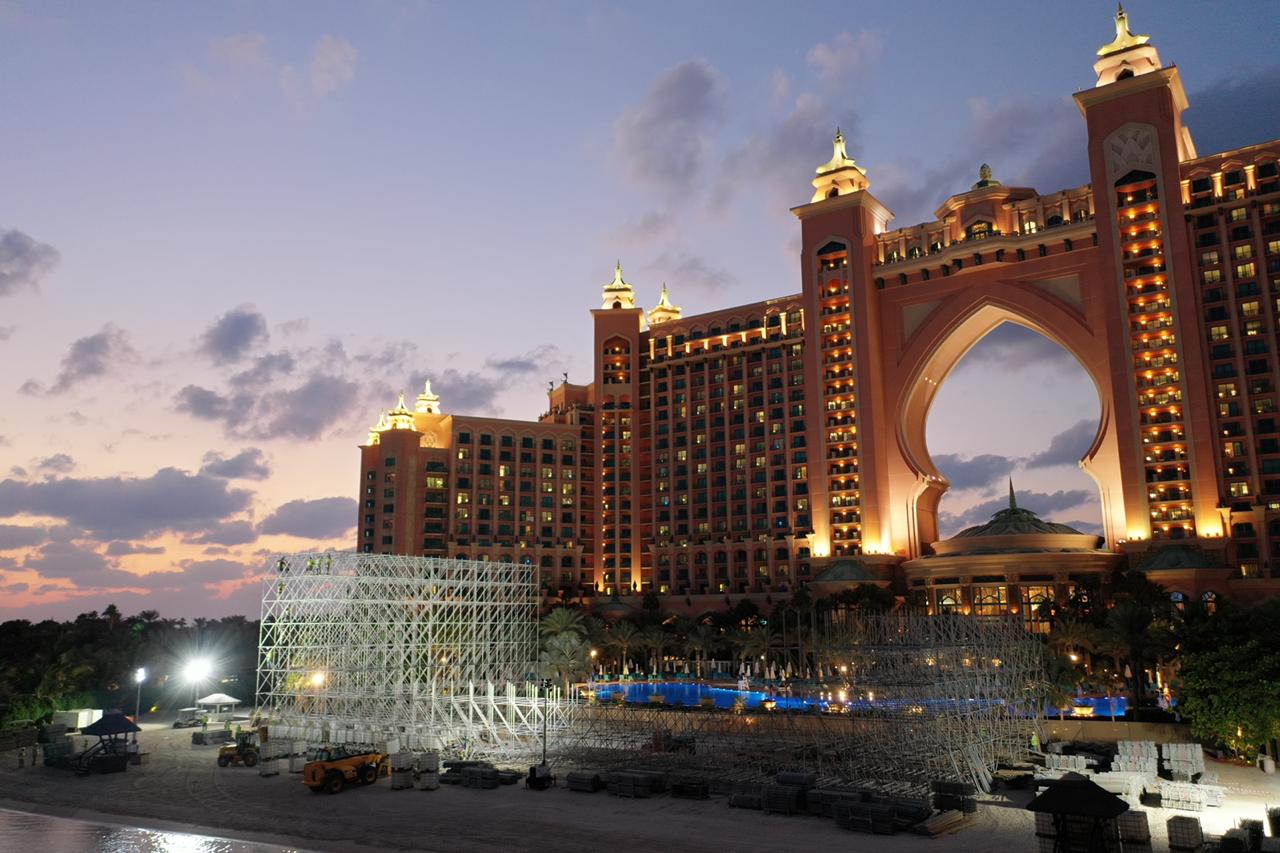 “I believe, at this point, we have over a million and a half dollars of pyro. It’s absolutely enormous; we’ve never been known for subtlety,” Stanley understates. Expect all the hits, given that KISS is in that “enviable position of having so many songs are considered classic.”

KISS was in the midst of their End of the Road World Tour, with 150 shows left, when the pandemic halted all. So they’ll be bringing that production, and more, to Dubai. “New Year’s Eve will be their final tour show on steroids,” Stanley promises. 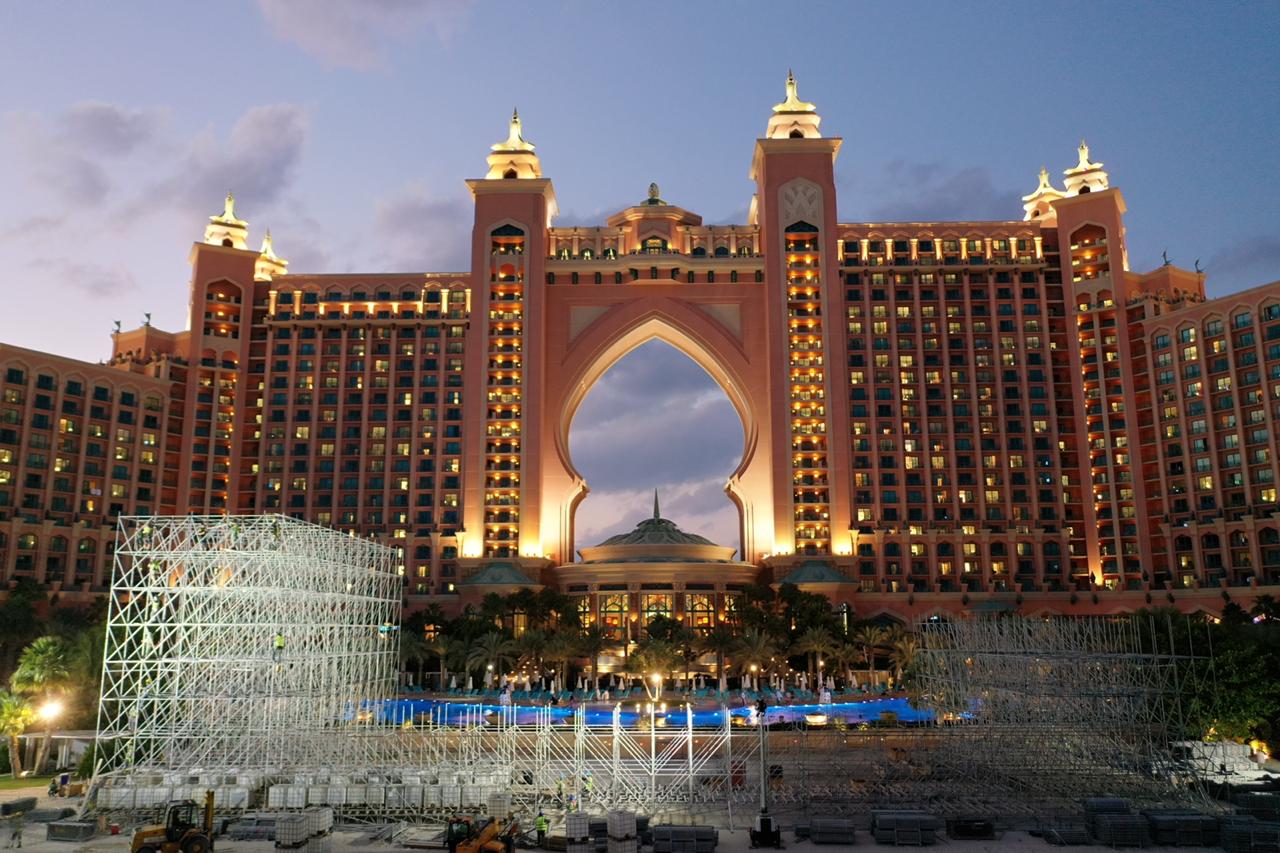 Interestingly, KISS hasn’t played but a handful of New Year’s Eve shows and all their festive holiday ventures have not been as stellar as you’d imagine. For instance, KISS had a distinctly Spinal Tap meets Animal House moment in the 2014 Macy’s Thanksgiving Day Parade. Stanley can retrospectively laugh at the fiasco.

“We were going to be in the Macy’s parade and were told about this massive float. Then seeing a stage with U-Haul attached it; once I got over the fury about our situation, you just had to laugh. It looked like that parade crash scene from Animal House.”

Stanley, who has been quarantining at his Los Angeles home with wife Erin and kids Emily, 9, Sarah, 11 and Colin, 14, found lockdown akin to Groundhog Day; “every day is the same, exactly.” However, he adds, “I have to give credit to children; children are amazingly adaptable. That being said, we have to put this in perspective. There are people and families quarantining in single rooms. So for us to complain would really mean that we don’t deserve what we have.”

He and 26-year-old musician-son Evan have gone on quarantine bike rides, and when Evan visits the rest of the family, “he’s been tested repeatedly, and we’ve still maintained a certain distance. So we’ve weathered this very well, and in stark contrast to just how horrific it has been for some people, not only in terms of limiting their lives but also in seeing members of their family perish.”

Stanley’s rock star status and comforts don’t make him immune to the emotions brought up by the pandemic. “Initially, I was in shock,” he says. “I think it just was so surreal that it kind of stopped everybody in their tracks and we had to get reoriented.” The musician, who is a painter, admits, “initially, I did very little. I pretty much stayed in the house. Nobody knew the parameters of what we could do. I’m sure we all remember wiping down shopping bags and groceries. Time has a way of getting away from you during this pandemic.”

In his non-KISS time, Stanley has a beloved musical project: Soul Station. The band “recreates classic Philly soul and Motown songs with authenticity and respect and also has new songs that write another page in that book.” Eventually during 2020, with proper safety protocols in place, Stanley finished the Soul Station album, which is slated for a March 2021 release.

For all KISS’s glitter and bombast, Stanley is serious about staying safe and being smart, as cautious as his band is bold. He observes, “People I think are seeing this light at the end of the tunnel of vaccines, but sadlly, a vaccine doesn’t do any good unless you’re vaccinated, and most of us haven’t been.”

On the glass-half-full side, Stanley believes that “one of the best things to come out of this horrible situation is people hopefully realizing how important we are to each other. And that human contact and support is really essential. And maybe, hopefully, that’s one of the lights we can carry through once this is over; appreciating one another and realizing how much we really need each other.”

KISS’ final tour date currently scheduled is Oct. 23, 2021, in Buenos Aires, Argentina. And given that the tour is coined “The End of the Road Tour,” 2020 might be the last time KISS, a band together since 1973, ever does an NYE gig. So the band has a lot invested in their Dubai event. “This is one of, I would say, maybe three times or so that we’ve ever done a New Year’s Eve show. This is a worldwide party. No,” Stanley corrects himself: “This is like the Olympics with guitars.”