The high-end VR title is available through Oculus and Steam 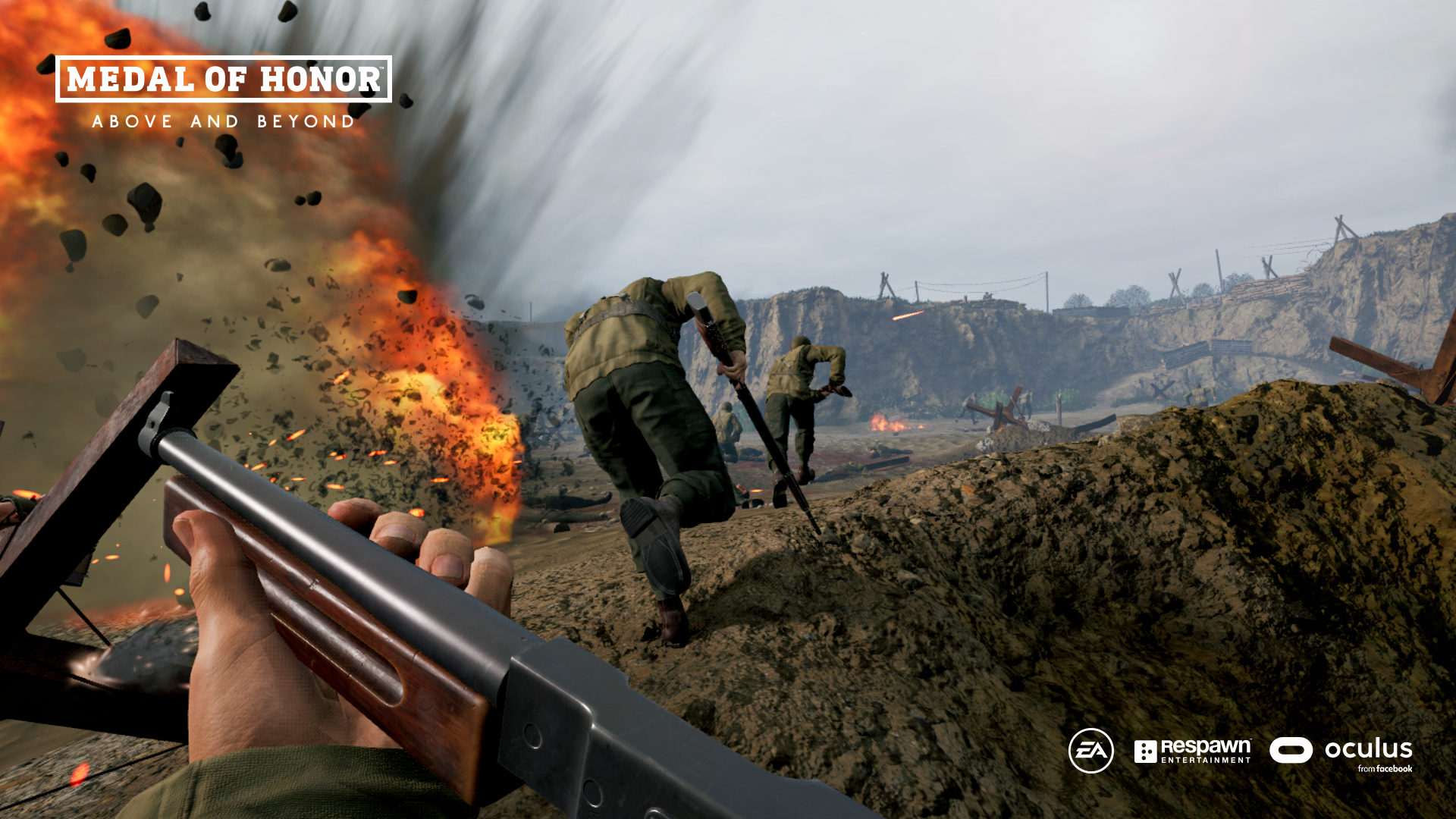 Medal of Honor: Above and Beyond isn’t just another first-person shooter set in World War II. The latest title from Respawn Entertainment not only pushes modern virtual reality technology to its limits in a way that most games wouldn’t dare to touch, but it’s also much more grounded in reality than something like Call of Duty often portrays.

Rather than ignoring history in favor of flashier fight sequences and bigger spectacles, the first Medal of Honor game since 2012 is based entirely on real people and events — even to the point of including more than 90 minutes of interviews with veterans as a documentary-like extra feature. The game spared no expense in bringing out the somber realities of war along and making a borderline educational experience in addition to a thrilling shooter.

To complement the next-level immersive graphics, narrative and gameplay, Respawn also enlisted the help of Michael Giacchino to score the game. After beginning his career in the video game industry — particularly with the early Medal of Honor titles — Giacchino has gone on to score and win awards for the biggest children’s movies (Up, The Incredibles, Coco, Ratatouille, etc.) and action films (Mission: Impossible III, Rogue One: A Star Wars Story, Star Trek Into Darkness, Spider-Man: Homecoming, etc.) around over the last several years.

SPIN spoke with the famous composer to chat about his return to Medal of Honor, the difference of VR games, and the emotion of scoring the most emotionally devastating scene in movie history (the opening sequence of Up).

SPIN: After more than a decade of working on some massive movies, what was it like to go back to your roots with Medal of Honor?
Michael Giacchino: The producer and director, Peter Hirschmann, and I go way back to the very first Medal of Honor. I’ve known him forever, so we were best friends through thick and thin and every up and down along the way. Prior to that, we also worked on The Lost World: Jurassic Park (1997) video game, which is where we really met. So then he goes through all of the Medal of Honor games, and twenty-something years later he calls me and says “Oh, yeah, there’s this other thing I was wondering if you might be interested in doing with me…” My schedule has been so crazy with lots of movies and different things going on, so there’s not a whole lot of time. But when he said that we were going to do another Medal of Honor, I thought “Hell yeah, I want to be involved with that.” That was really the thing that really started me in this whole crazy business, and they were so important to getting me to where I am today. I met some of my favorite people in the world working on those.

As someone with experience working on major film and television projects, how is composing for a video game different?
It’s odd, but they’re all very similar, because at its core, the job is the same. You’re there to help tell a story along with the filmmakers or the video game producers. Whether I’m writing for characters in Medal of Honor or a rat who wants to cook or some guy named James T. Kirk who wants to pilot the Enterprise, the actual work itself is the same. I record them the same way I would record any other project. I mean, I recorded Medal of Honor the same way I recorded Spider-Man. It’s a big orchestra all together — although Medal of Honor was a little different because of COVID, so we had to figure out how to be creative in getting it all recorded. Everyone had to be socially distanced, so you can only have a certain amount of people in the room at once. We had to record in sections, but we got it done. But other than that, it’s all the same. I don’t see it as a video game, I see it as another story that I’m tasked to help tell the story for.

Since you’ve done everything from animated children’s movies and blockbuster action flicks to horror/sci-fi films and video games how does the genre of the project you’re working on affect how you create for it?
Well, depending on the project, the tone is different. With every project, one of the first things I do is sit down, watch the film or play the game — or watch somebody who knows what they’re doing play the game, because I’m pretty bad at playing video games. But whether it’s a film, TV show, or video game, I really track how I was feeling while I was watching it. When you’re watching something like Medal of Honor, it’s going to run the gamut, but a lot of it is going to be tense and action-oriented. It doesn’t mean it’s without its moments of pathos or somberness, as that’s one thing we’ve always made sure to put into Medal of Honor. What I’m doing is really gauging my reactions, tracking my actions, and taking those feelings and those emotions and turning them into music. Like if I’m working on Up and I’m watching that “married life” scene, it’s all about how did I feel when I watched that? Removing myself from the fact that it’s a movie, I’m trying to just put myself in the frame of mind that the characters are in. How would they feel? How would I react if that was me? Those are the emotions and the feelings I’m tapping into. That’s especially true for Medal of Honor, as you try to put yourself in the shoes of the people that were really out there doing the things that are portrayed in these games. You suddenly forget that this is a game, and you are reminded of how horrifying and terrifying that situation must have been for these people. That’s where I’m always trying to put myself in the place of that character so that I can more truthfully give that experience to the audience with the music that I write.

Were there any differences composing for Medal of Honor due to it being a VR game?
Honestly, I hadn’t even played a lot of VR games until the day I went into the office where they were making it. They put the helmet on me and had me play the game, and I was amazed at how it gives you a much more visceral feeling than you get from a third-person shooter or a side scroller. It’s a very different emotional impact, so I felt very differently than I remember feeling the first time I was watching someone play Medal of Honor way back in the late ‘90s. I remember thinking that was cool, but when you play this new one, it’s a whole different thing. All of the emotional ammo that I needed for writing the music came much quicker just because of the immersive sort of experience that you’re thrown into, which you’re generally not when you’re watching a movie or watching somebody else do a playthrough. When I go see a film that I’m about to score, I’m in a movie theater or a screening room or an edit room, and the reality around you beyond the screen is there. With this, everything around you is the game, so you don’t get that little break you have from being able to look to the side and see someone else or a chair or grab your soda can. This is a very different experience, and I found it quite fun to see how all the creative juices got sparked just from putting that thing on.