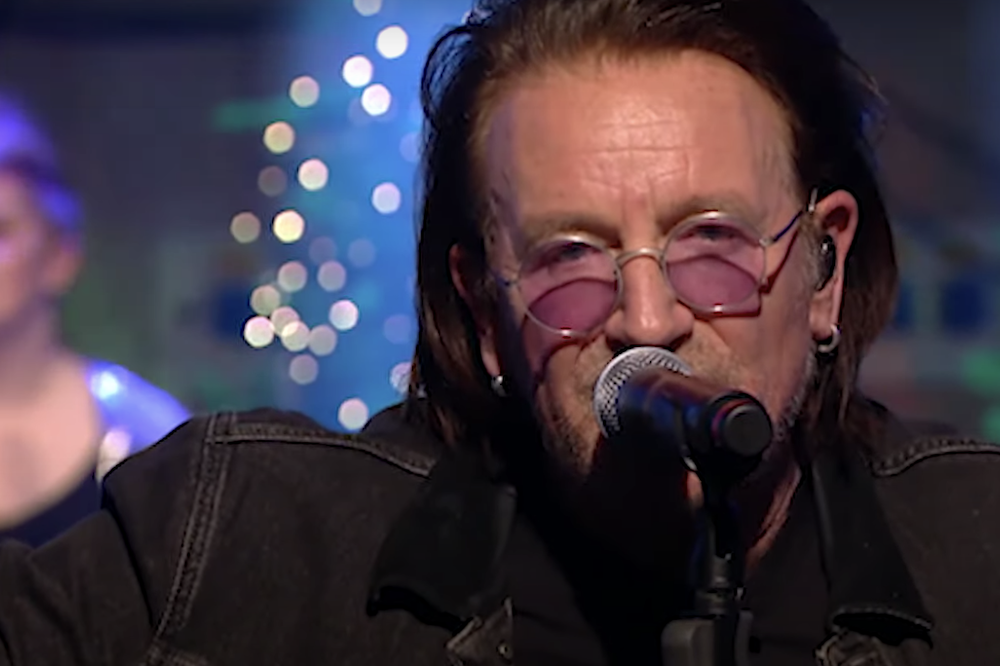 Bono and the Edge got in the holiday spirit this week and performed an in-studio cover of “Christmas (Baby Please Come Home)” during Ireland’s Late Late Show holiday episode. The performance was a tribute to the annual Christmas Eve Grafton Street Busk, and the U2 stars were joined by a number of local musicians. The band also recorded a version of the Darlene Love classic for the 1987 compilation A Very Special Christmas.

In addition to the festive tune, Bono and the Edge also played an acoustic rendition of “Walk On” off U2’s 2000 album All That You Can’t Leave Behind.

Aside from performing, Bono and the Edge also chatted with Ryan Tubridy about U2’s 10 million euro donation to Ireland’s COVID-19 relief efforts, namely providing PPE to frontline workers, and why going public with it made the band feel uneasy.

“Any public advertisement of giving away money is PR, so I just want to be clear about that. So if we are giving anything publicly, I think you’ve got to accept its a kind of exercise in self-promotion, and we’ve always tried always to avoid that — in this country especially — over the years,” Bono admitted before explaining their decision to publicize the generous donation. “There was a lot of fighting in the band about this, but we felt like we had to come out and show solidarity. If we can’t be really useful, let’s find the people who are and try to get them protective wear.”

“We’re so fortunate, and so many people were far more impacted than we were, but actually it’s the people risking their lives to help others, they really needed support and deserved support,” the Edge added.

U2’s Joshua Tree made the top 10 in our list of 35 Best Albums of the Last 35 Years. See what else made the cut here.