The members of Nine Inch Nails, in separate statements on the band’s website, shared what their 2020 Rock and Roll Hall of Fame induction means to each of them, although singer Trent Reznor did not participate in the group endeavor.

Danny Lohner, who plays guitar, bass, and keyboards for the band live, stated “In 1993, while still in my early 20’s, I joined my favorite band – Nine Inch Nails. Now it’s 2020, I’m just a few months shy of 50 years old, and I’ve been given the surreal honor of joining Trent and the boys in their induction into the RnR Hall Of Fame. All these years later, I still can’t believe my luck….”

The band’s Atticus Ross, in a lengthy statement, said in part that, “Trent remains the musician I most admire. Year after year we’ve toiled, unraveling life and music, whether that be in a fancy control room, the back of the bus, or a converted bedroom – what’s kept things exciting is the voyage of discovery.”

Ross described the band’s essence as not having a formula. “So many bands have a formula but Nine Inch Nails is defined by not having one. An aesthetic, yes – but not a formula. From 1989 to present-day every release or tour breaks down a new door. Fashion is transitory, but passion, authenticity and honesty are not.” 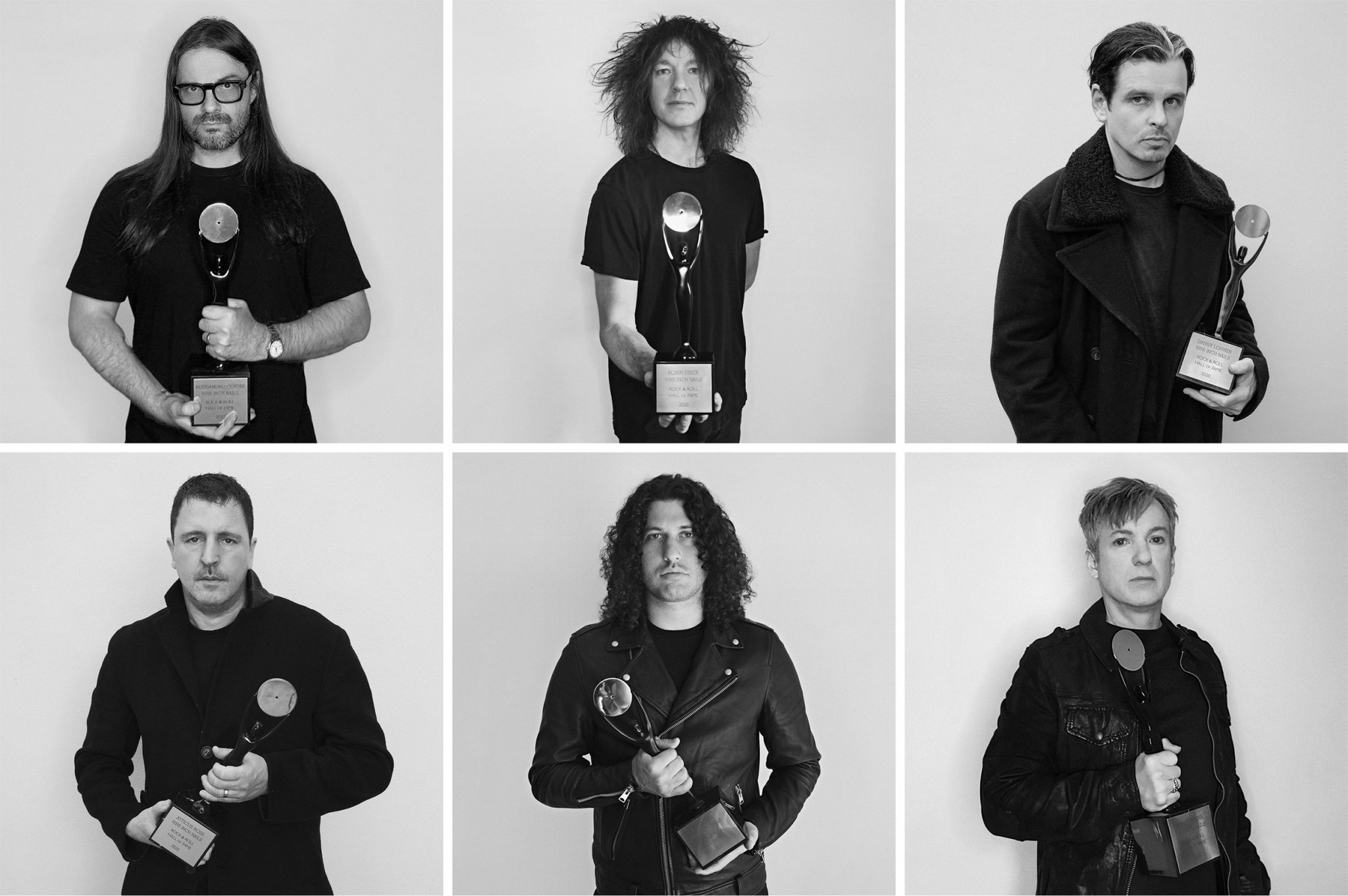 Robin Finck’s statement thanked the Rock Hall, saying “NIN has provided to me endless opportunities to experience this gorgeous world in ways a shy, gangly kid from Georgia never knew to dream of. Most of all it provided a space where that kid would fast grow to vibrantly connect with throngs of fiery individuals, in their hometowns, around the planet, to thrash and sway and to relate.”

He added, “I don’t take any of it for granted.”

Italian musician Alessandro Cortini offered that with NIN, “Initially our commonality was the love for the music but after years of working together, we have become more than family. This marks my 16th year as a band member. The induction to the Rock n Roll HoF is an incredible honor and reinforces the belief that I have been part of something truly special.”

The group’s Ilan Rubin called being asked to play with NIN “the turning point in my life and career. The uncompromising drive, creativity, and quest for perfection were immediately evident, and I knew that this was the band for me.”

In part, Rubin added, “I’ve always been grateful to Trent and co. for having taken the chance on a then 20-year-old, and I feel an immense sense of pride looking back on the countless shows and hours spent playing the music. The songs have unquestionably stood the test of time, and bringing those pieces to life, night after night, city after city, for crowds with endless enthusiasm has been nothing but an honor.”

And finally, a long statement from Chris Vrenna talked about the honor of being in the “Rock and Roll HOF. … Being inducted with my oldest friend makes it even more special. … Trent and I started this whole ride in Cleveland decades ago, and here we are back in Cleveland to be enshrined with some of the greatest artists in music history.”

Vrenna went on to recall the band’s genesis. “In 1988, NIN was asked to open for Skinny Puppy on the east coast leg of the “Vivisect VI” tour. We did that tour driving up and down the coast crammed into Trent’s hatchback. It was the most exciting thing ever. I was 21 years old and had no idea what was to come.”

He concluded, “My years with Trent and NIN are some of the best of my life, and I continue to treasure those memories. And now, those memories can live on in the Rock and Roll HOF. Thank you to every single fan…past, present, and future that continue to discover NIN. …  I am eternally grateful for everything we accomplished with NIN.”

NIN will take part in a pre-induction conversation on Nov. 6 at 2 pm ET, streaming on NIN’s YouTube, Facebook, and Twitter. Reznor will join the rest of his band for the event.

Today, NIN and other 2020 inductees were honored with cover songs, St. Vincent and Jehnny Beth of Savages taking on the band’s “Piggy” and “Closer”