Infinity Knives on Defying Easy Description, Blowing Up on Bandcamp

Meet the Baltimore polymath who made 'Dear, Sudan,' one of the year’s strangest, most exciting albums 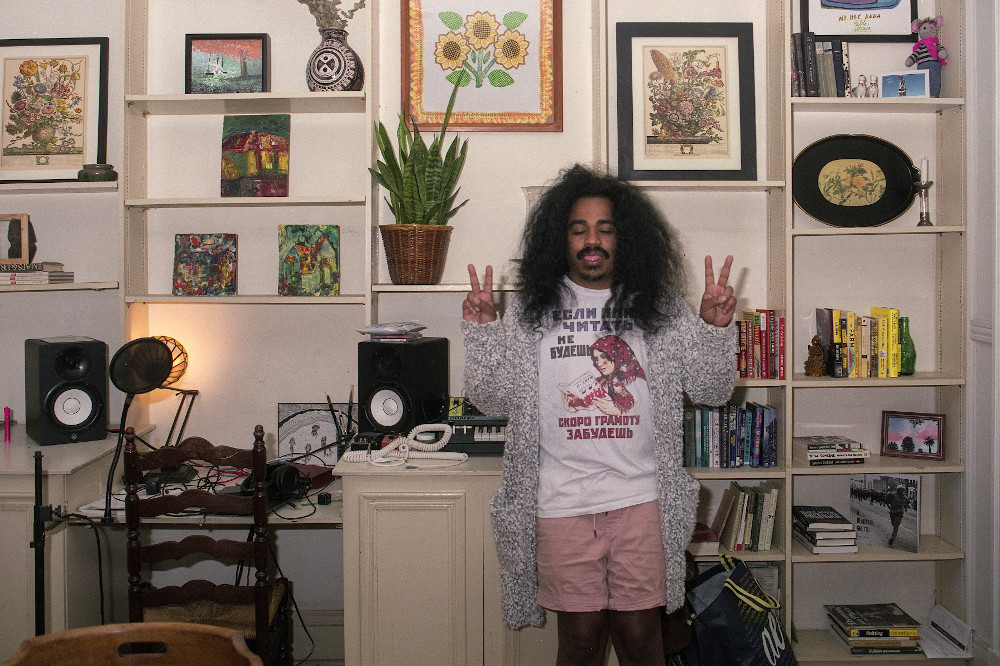 “I used to skip class,” says Tariq Ravelomanana, recalling his adolescent years at Baltimore County’s Perry Hall High School. “We had a piano room that nobody used, so I could just go in there and play.” And even now, as a skilled musician who records under the name Infinity Knives, he describes what he can play as “anything I could get [his] hands on.”

“I borrow instruments [to record],” he says. “I didn’t own a guitar until two years ago.”

Ravelomanana, 28, arrived at his intuitive, self-taught musical approach during years of early travel: He was born in Tanzania, moved around Africa throughout his childhood and wound up in Maryland as a teenager.

“My dad’s a conservative Muslim, and my mom’s a conservative Christian. So I wasn’t really allowed to listen to music, but I kinda snuck ‘em in: Kenny Rogers CDs and Elton John,” he says, smoking on the back porch of the Charles Village rowhouse where he lives, after we meet up and exchange a pandemic elbow-bump greeting.

“I lived in Arkansas for a bit for a Mormon family — I was a Mormon for a while. Every time I moved, it was like a new culture, a new religion. When I lived in South Africa, what was really big was house music,” he says. “But hip-hop was my first love, I heard it when I grew up in Africa, it was Wu-Tang, 2Pac.”

Hip-hop and his grandmother’s love of classical music led him to avant-garde composers like John Cage and Erik Satie, who became the primary dueling influences on the fascinating, uncategorizable Infinity Knives albums.

Before anybody had heard of him, Ravelomanana was already friends with many of the leading lights of Baltimore’s experimental hip-hop scene, including Abdu Ali and his former roommate JPEGMAFIA, who encouraged him to release his own music. “I‘d show up with some beats, and everybody would be like, ‘Yo, what the fuck, why haven’t you released this yet?’ And then eventually I was like y’know what, my life isn’t going anywhere, I keep working these dead end jobs — why not?”

In 2019, he self-released the first two Infinity Knives LPs on Bandcamp, and the second, Dear, Sudan, became a word-of-mouth hit. “I just kinda put it out there,” he says. “I just made one [social media] post, and then it sort of took on a life of its own, I didn’t expect it.”

One of Dear, Sudan’s early fans, Baltimore-based ambient artist Ami Dang, championed the record to James Vella, co-founder of the U.K. label Phantom Limb. Ravelomanana quickly hit it off with Vella, who worked with some of his favorite composers like Max Richter and Hauschka in his previous A&R position at FatCat Records. Now Phantom Limb is rolling out an international re-release of Dear, Sudan on Nov. 6, bringing it to an even wider audience.

It’s a brilliant, unpredictable work full of incongruous moments: At one point, a goofy skit about the imprisoned Florida rap star Kodak Black leads into a beautiful instrumental entitled “Thus Spoke My Father, The Coward.” One of Ravelomanana’s best friends, Maryland rapper Brian Ennals, drops poignant and acerbic rhymes over eerie, minimal beats on “Black Addicts” and “Drug Dealer, Drug Dealer.” The single “In the Mouth of Sadness,” featuring haunting vocals by Bobbi Rush and Tyler Moonlight, has already been played on BBC Radio.

Before the COVID-19 lockdown, Ravelomanana was hoping to mount an Infinity Knives tour with a full backing band, featuring members of the Mind On Fire collective. “It’s like a modular orchestra, and we got all the stuff written down for essentially a one-hour performance — you know, woodwinds, violins, synths, singers.”

Instead, he’s stayed home for most of 2020, releasing and prepping more music. In July, he released Rhino XXL, a collaborative project with Brian Ennals, and he currently has ambitious plans to executive produce the next Ennals solo album. Loris, Ravelomanana’s band with singer Randi Withani Roberts and ex-Dope Body drummer David Jacober, released their self-titled debut album in September.

“I haven’t left since March,” Ravelomanana says. “I’ve just been in the house. I’m unemployed. Literally my only income is music right now.” But thanks to his recent successes, he can afford to support other musicians on the site where his career got started.

“I got a pretty fat Bandcamp Day list,” he adds. “I’m gonna spend so much money.”