Saturday Night Live is back! The late-night sketch comedy returns to NBC for the start of its 46th season on Saturday.

After spending half of last season shooting at-home episodes due to the pandemic, promos for the show have revealed the cast is back at 30 Rock’s Studio H8 and ready to put on a show. Former SNL cast member Chris Rock (’90-’93) will host the season premiere, which also features the debut performance of hip-hop’s woman of the moment – Megan Thee Stallion.

Over the years, the long-running late-night series has featured some iconic performances, usually bringing in artists at a pivotal moment in their career and giving them a legendary platform to transfix America. And so, in that spirit (and because it’s 2020), SPIN looks back at some of the biggest breakthrough performances of the last 20 years (in order of appearance). 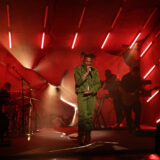 New York’s finest indie rockers of the noughties (aka the early 2000s) had the audience screaming when they visited Studio 8H to show off hit-with-hipsters “Last Night” and the driving “Hard to Explain.” Host Jack Black, who brought his own band, Tenacious D, to the show, also performed a little bit.

In his trademark dusty white jeans and T-shirt, Detroit’s Andrew W.K. brought “Party Hard” off debut LP I Get Wet to the Dwayne “The Rock” Johnson-hosted episode of SNL in 2002. It was good, rollicking, head-banging late-night fun for the hotly-tipped British-music-press-loved artist.

Former presidential candidate John McCain hosted SNL as it welcomed Detroit’s favorite two-piece, the White Stripes. Jack and Meg, in their color-coordinated red and white outfits, brought the garage rock revolution to 30 Rock as they performed “Dead Leaves and the Dirty Ground” and “We’re Going to Be Friends.”

Kanye West made at least seven memorable appearances on “SNL” across the last two decades, but his official first one happened in 2005, when Steve Carell, then the star of The 40-Year Old Virgin, hosted. Kanye even got in on the pre-show fun as Amy Poehler flirted with him in a show promo.

Sheffield, England’s Arctic Monkeys made their way to SNL with their celebrated Mercury Music Prize-winning debut album, Whatever People Say I Am, That’s What I’m Not. The four-piece plugged “I Bet You Look Good on the Dancefloor” making good on all that overseas British press hype.

Anne Hathaway couldn’t hide her enthusiasm when Florence + the Machine made her U.S. network television debut on SNL, bringing her powerful voice and feminine energy to the stage with “Dog Days are Over.” The anthemic “You’ve Got the Love” was her closer. It’s a hard-to-find performance on the Interwebs, but maybe, if we keep refreshing that Peacock app that’s dropped all 45 seasons of the show, it’ll pop up one of these days.

Seeing as “Bodytalk” made SPIN‘s list of best albums of the 2010s, Swedish pop singer Robyn’s performance on SNL with tunes from the celebrated LP lands on this one. She took to the stage in spattered light-blue spandex, a mesh shirt, brown vest and chunky black boots, and brought those heartfelt lyrics from “Dancing On My Own” to life during late night.” “Call Your Girlfriend” was also part of her set, but it’s worth taking a look at the tribute video then-cast member Taran Killian created as he and the cast wrote sketches for the show, which was hosted by Katy Perry.

Breakthrough performances come in all shapes and sizes and Lana Del Rey’s SNL debut was memorable for all the wrong reasons. The chanteuse – who was two weeks away from releasing the first version of her debut album, Born to Die, found herself panned and slammed on Twitter after what some saw as shaky performances of “Video Games” and “Blue Jeans.” Entertainment Weekly even pondered in a think piece whether it was the worst SNL musical performance ever. But critics’ views aside, her two-song set – which host Daniel Radcliffe later defended – remains forever memorable.

Kendrick Lamar made the first of what’s turned out to be several visits to SNL beginning in 2013. Maroon 5 and then-The Voice coach Adam Levine, hosted the episode where Lamar conquered more fans with performances of “Swimming Pools (Drank)” and “Poetic Justice.”

Recent SPIN cover stars – the sisters of Haim – rocked the SNL stage for the first time in 2013, after being introduced by “Hunger Games” star Josh Hutcherson. The trio left their mark, churning out fiery performances of “The Wire” and “Don’t Save Me” – with Este Haim’s (bassist/vocals) expressions becoming a Twitter talking point. We can only hope that with the sketch show back in the studio, the outfit returns for a third-time to floor us with a few numbers from WIMPII.

Melissa McCarthy introduced Imagine Dragons in February 2014 to the SNL family, and they made their debut in a big way. They had ALL the drums, a full orchestra and help from the one and only Kendrick Lamar, who they’d previously collaborated with at the Grammys.

Super-producer/songwriter/musician Mark Ronson took over musical guest duties in November 2014, with collaborator Bruno Mars, for a rendition of “Uptown Funk” that’s still sizzling away on YouTube to the tune of 32 million views.

Already a major radio star, Sia brought her blunt blond shoulder cut and a fluffy black face visor to stay incognito when she visited SNL in 2015 alongside host Kevin Hart. Her performance – also featuring dancer Maddie Ziegler – of “Elastic Heart” continues to blow up beyond its brief TV stint, racking up a massive 30 million views on YouTube.

The Weeknd has made a handful of appearances on NBC’s long-running late-night show, including an uncredited one in 2014. But, the artist hit the stage for his official debut in 2015 on an Amy Schumer-hosted show bringing his mega-hit “Can’t Feel My Face” and a moody atmosphere to its stages. He’s followed it up several times since and we won’t be surprised if he crops up in Season 46.

Chicago’s Chance the Rapper joined “Thor” star Chris Hemsworth for the eighth episode in Season 41, which saw him perform “Somewhere in Paradise” and “Sunday Candy.” He’s since followed twice more as solo musical guest, and in 2017 and 2019 played the dual role of musical guest and host, where he got to have fun rapping his latest monologue.

After a blistering rendition of “Bodak Yellow” as her opening number, Cardi B used the show to make a major announcement – confirming her pregnancy by wearing a form-fitting white dress, revealing her baby bump to cheers from the audience mid-way through “Be Careful.” The April 2018 episode was also memorable as it featured late Black Panther star Chadwick Boseman as host.

Donald Glover pulled double-duty in May 2018, hosting as himself, and performing as his music alter-ego, Childish Gambino. He employed some 3-D style stage lights – and adorable young dancers – during his version of “This Is America,” located three-quarters of the way through the show, which is available to watch online here.

Country music’s Kacey Musgraves brought a “Slow Burn” to SNL in 2018, when she made her debut on an episode once again hosted by comedian and big-screen star Amy Schumer. The former SPIN cover girl brought her catchy licks and wooed all of America. Saunter back in time by watching this performance of “High Horse”:

Host Woody Harrelson introduced her as the “incomparable” Billie Eilish when the multi-Grammy winner and teenager took the SNL stage for the first time in 2019. And she lived up to his praise with a mind-bending version of “Bad Guy” that saw her straddling the ceiling and the walls – a performance so damn fascinating the show had to release a behind-the-scenes video showing how the performance was put together.

Talk about a moment! Lizzo made her SNL debut in Dec. 2019, performing on the show where Eddie Murphy returned to his old stomping grounds – after 35 years – to host. It turned out to be an iconic and Emmy-award winning episode (for Murphy), boosted by peak-era Lizzo, who opened with a grungy, bad-ass version of her hit, “Truth Hurts.” The queen closed her thunderous set in a suit – satin in the front, all sparkles along the back – bringing festive twerking to the SNL stage for “Good as Hell.” And, it may have been cut for time, but Lizzo also got in on a skit, as Aidy Bryant became Aidy Bizzo, mini-purse and all.