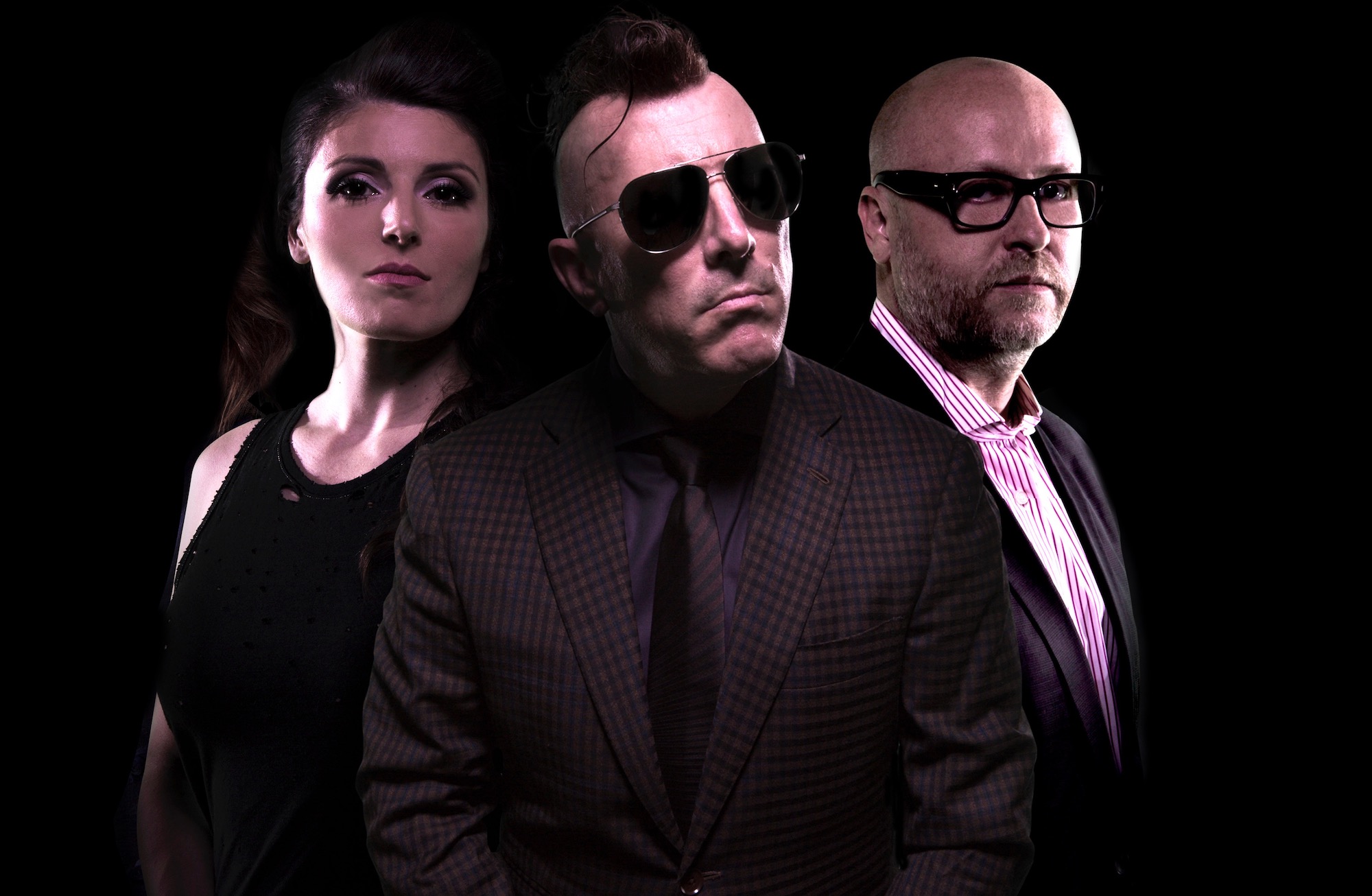 Feel like the COVID-19 era has been lacking a stone-cold jam to put some rhythm in your step as you nervously pace around your dwelling during self-isolation? Rejoice; after a five-year hiatus, Puscifer—the electro-rock side project of Tool singer Maynard James Keenan— is back with a new album, Existential Reckoning, and a lead single “Apocalyptical,” that’s infectious enough to make you want to dance the blight away and ponderous enough to make your mind work up a sweat while doing so.

Though Existential Reckoning began to take form prior to the pandemic — Keenan notes that the band began “chipping away” at the new material in late 2018 —”Apocalyptical,” in particular, touches on the elephant in the room both coincidentally and otherwise. The track itself marries a weighty, sharp-angled groove with ominous, cautionary lyrics (“Concrete conclusions be damned/They won’t believe you until it’s far too late”) that are tailor-made for these times. Meanwhile, the video puts a somewhat whimsical spin on the pandemic, fusing coronavirus imagery with visuals that somehow fall between Men in Black and Robert Palmer’s “Addicted to Love” video.

It’s a deft fusion of humor and heaviness that the group has become known for—but then, would you expect any less from a band whose name originated from a Mr. Show episode and employs pseudonyms that include Dick Merkin? “We’re the clown in the room pointing out the silliness and the absurdities,” Keenan notes of the band’s role as social observers.

Of course, it would be a mistake to expect Existential Reckoning — out Oct. 30 on Alchemy Recordings/Puscifer Entertainment/BMG — to be all fun and games. As Keenan explains of the new album (which in addition to longstanding Puscifer members Keenan, Mat Mitchell and Carina Round, also enlists Failure alum Greg Edwards, among others), “Just as the title suggests, there’s a lot of introspection.”

SPIN spoke with Keenan and multi-instrumentalist/producer Mitchell about making art in the time of COVID, the new world order of the internet and the public’s odd obsession with asswipe in the quarantine age.

SPIN: It’s been five years since your last album was released. What made now a good time for a new Puscifer record?
Maynard James Keenan: Mat has been working a lot, putting a lot of pieces together, putting them in folders, putting them online for me to access. As soon as I was wrapped up on tracking my parts for the last Tool album, I started looking in the folder. So we started chipping away late ’18, early ’19. And then when you have a little bit of momentum, you can start setting deadlines for yourself. Like, “Okay, if we get to this number of tracks at 75%, then we should just do the push and get it done.” And that was all pretty much at the end of ‘19.

Mat Mitchell: To me, when we start getting lyrics on things, that’s when it starts to really take focus, and that’s when it becomes more than a pool of ideas. And that started August or September of last year. A lot of these ideas were initially formed on the last tour. And then obviously built out, and seeing them through last year and this year.

Did the pandemic affect any of the writing and recording?
Keenan: Not really. I’m sure for Mat, trying to get pieces of equipment or us trying to order parts for vintage keyboards, it probably made it a little more difficult. But the internet is in place. The way we record we’re pretty isolated, self-contained. And Mat does all the mixing in our own studio, so we didn’t have to go find some studio allowing us to come in and do a mix. So I guess the answer is, not really.

Mitchell: Not consciously, but subconsciously, when Los Angeles was at that stay at home order and Maynard was like, “Well, ‘Apocalyptical’ seems really relevant right now.”…It wasn’t really written as anything that had anything to do with the current state, but it just fit. And he was like, “Let’s get that out.” And we had just entered the stay at home order, we were about three weeks into it. No one knew what this thing was and how to manage it. So there was a bit of nervousness about going into the studio.

“Apocalyptical” and “The Underwhelming” certainly seem to touch on the pandemic.
Keenan: Well, it reflects some of the current state of things, but it reflects things we have already been going through for a long time. Just in terms of consciousness, being aware of what’s going on around you and reacting appropriately. It’s seemed to be coincidental that it touched on the actual pandemic. But in general, that’s kind of how we’ve treated things for a while. We’re always late for the party, polarized in some way. The new world order of the internet has polarized us to the point where we don’t look at what’s in front of us. We don’t really look up. We kind of look to what the people we don’t like, don’t like, and what the people that we like, like, and that’s it. That’s where we stop. We don’t really look deeper into any issues.

It’s incredible how people have built up walls around them. And there’ve been so many enabling factors that have exacerbated that in recent years.
Keenan: Yeah. Just by implementing a system where you would hit a “like” button or “don’t like” button and then having the internet spit back your reflection at you. It enables you to go down your own rabbit hole with no windows. So it’s kind of a poison in my opinion.

Have you seen the Netflix film The Social Dilemma?
Keenan: No, friends of mine suggested it and I haven’t seen it yet, but from the description, it sounds about right. The one show that I only watched about five episodes of, because I just had to get out, was Black Mirror. It was just too much. It was just too close to home and too accurate. I had to shut that one down. It made me more uncomfortable than watching Curb Your Enthusiasm.

The “Apocalyptical” video, which features a skater in a hazmat suit rolling through a desolate Los Angeles, contains a lot of pandemic imagery, but it’s also pretty whimsical. Was there deliberation about how to approach a video that touches on the pandemic?
Keenan: As an artist, you have to, as we’ve said in the past, observe, interpret and report, right away in the moment. We’re kind of like the court jesters, right? We’re the clown in the room pointing out the silliness and the absurdities, just to help those in charge make better decisions without the agenda….And in addition to that, when else are we going to be able to get a permit to film in L.A. where there’s nobody in the streets? You have to seize that moment. And of course, there’s the gag at the end about toilet paper, which was a big priority for everyone when the pandemic first started.
Keenan: Yeah. There’s been several articles published trying to trace back where the fuck that came from. Like, why is that the priority? Why do people panic and hoard things when you have more toilet paper than you’ll ever have shit in your life? I don’t understand. You can’t physically shit that much to need that much toilet paper. So then it caused problems for people that didn’t act first. Monty Python would take that and run with it for days. Just that, there would be an entire episode dedicated to toilet paper. I’m sure the South Park guys have several episodes dedicated to toilet paper.

Puscifer has been big on remixes in the past. Do you have any plans for that for the new record?
Mitchell: We do. We’re working on a few other things right now, but that’s certainly something that we’ll definitely…I don’t want to say definitely, but is in the cards to happen. We definitely like breaking the songs down and redoing them. And then, obviously, the collaboration with getting other people involved and hearing other people’s interpretation. I think it’s fun for us as artists to hear other people’s takes on our stuff. And I hope the fans feel the same about it.

Do you still plan to tour next year?
Keenan: Fingers crossed, that is the plan. I still have touring to do with Tool, and there’s touring to do with Puscifer. Of course, Puscifer is a much smaller group. And these people need to pay the rent. And certainly, not having had an album out in four or five years, it’s time for them to get back on the road so they can make a living. Tool, we’re doing pretty good. So we’ll get back out there and finish up what we started, but it’s going to be a busy year if all the restrictions are lifted.

You’ve done a Lucha Libre-themed live performance in the past. Have you thought about what sort of show you would want to do this time out?
Keenan: Yes.

Is there anything you can say about it?
Keenan: Nope.

Okay. A lot of bands have turned to online shows. Is that something you’ve considered if touring isn’t an option next year?
Keenan: Yep…

Okay. I’ve heard you’re cagey!
Keenan: Well, to defend myself in that realm, I’ve had instances where things have been promised that weren’t delivered and it’s very disappointing. So I would rather not tell you anything until it’s 100% sure. And then I’m only going to tell you that part is coming. It’s unfair to say, “Here’s all the things that we’re going to do.” And then somebody goes, “Hey, where’s that thing?” “Oh yeah. We had to cancel that” or “That didn’t get done” or “We’re still taking our time.” I don’t want to say anything until we absolutely know, and then you will know and everyone will know.

[On that note, Puscifer will perform a livestream concert experience dubbed Existential Reckoning: Live at Arcosanti at 3 p.m. PT. on October 30. Tickets can be purchased here.]