Aside from being hitmakers, the members of Portugal. The Man are also social activists who champion the indigenous community. Oct. 12 marks Indigenous Peoples Day, and to raise awareness the band partnered with one of its biggest influences — “Weird Al” Yankovic — and fellow Portland artist The Last Artful, Dodgr for a new song called “Who’s Gonna Stop Me.”

“I grew up listening to The Beatles, David Bowie, Motown, and “Weird Al” Yankovic,” P.TM leader John Gourley tells SPIN. “They are my pillars for music and now Al is featuring on one of our songs. Al is America to me. He is for everyone, he has the most diverse fanbase, the guy is in his fifth decade of hit records.”

“I’ve jammed with them at Bonnaroo, I’ve produced remixes for two of their songs, and now I’m doing vocals on ‘Who’s Gonna Stop Me.’ Portugal. The Man are not only my friends, but they’re one of my favorite bands in the world, and I’m thrilled to be featured on their new single,” Yankovic added.

The track is Yankovic’s first featured credit and non-comedic release of his career. “Who’s Gonna Stop Me” is accompanied by a music video directed by Aaron Brown and Josué Rivas that stars indigenous artists and leaders from around the country including world champion jingle dancer, Acosia Red Elk, of the Umatilla people of Oregon. 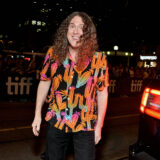 “Working on this video was all about the process for me, being able to collaborate and make something with Portugal. The Man, Weird Al and our Indigenous relatives was healing,” Rivas tells SPIN. “We are in a moment in need of weaving, collaboration, and building bridges. We are all future ancestors and when make things together, we are powerful. Tlazocamati.”

The visuals feature Coyote imagery, which “represents the trickster and the maker of new worlds,” P.TM explains. “The trickster is an archetype that can be found in nearly all indigenous and ancient cultures; the trickster not only is playful and a comedian but through their playfulness, they connect people.”

Watch the “Who’s Gonna Stop Me” video below.