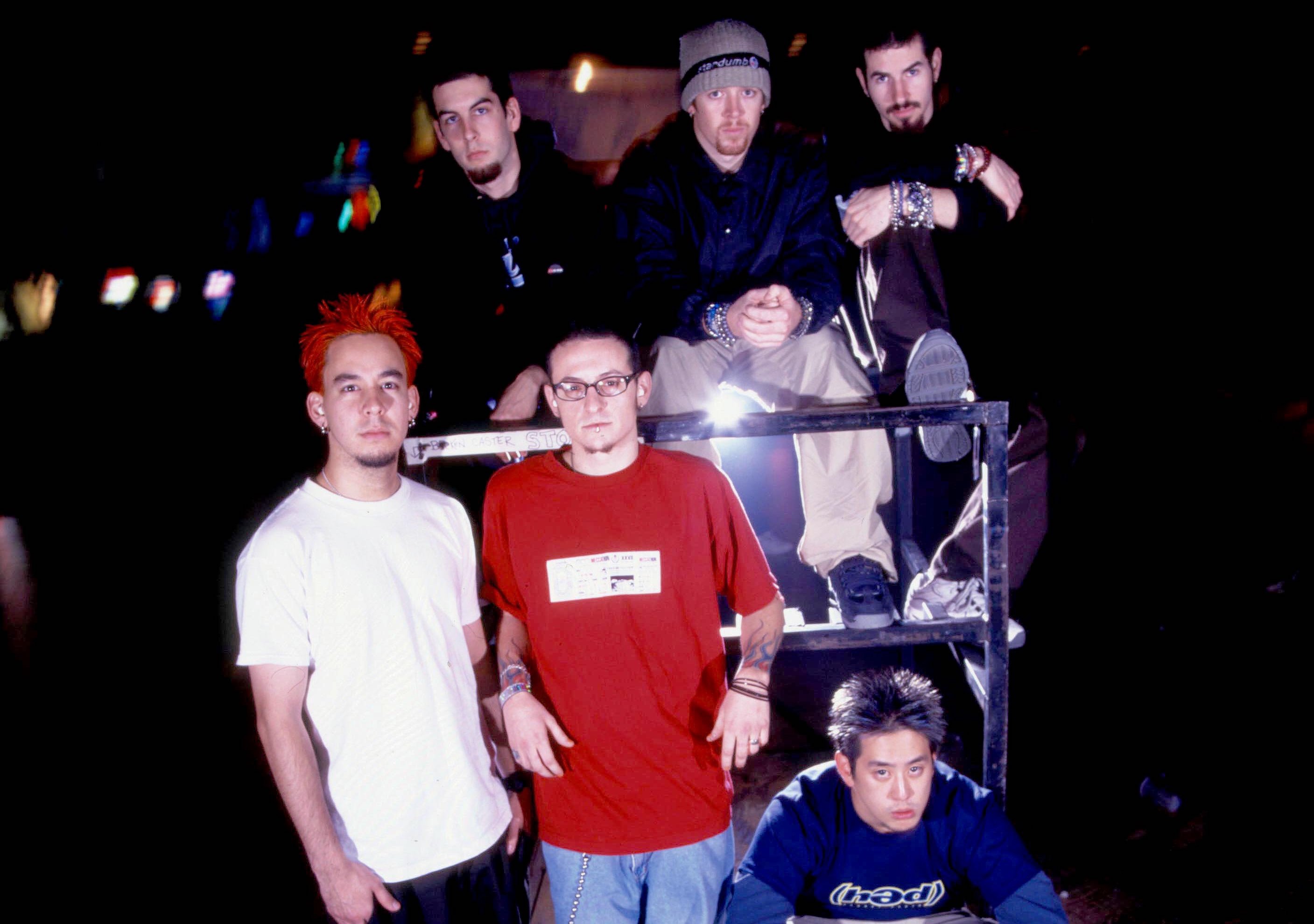 Mike Shinoda and Chester Bennington had had it.

For what felt like the hundredth time, Good Charlotte and Dashboard Confessional producer Don Gilmore ordered the Linkin Park lyricists back to the lounge space inside North Hollywood’s NRG Recording Studios to craft new lines for “One Step Closer” — which would end up being the lead single off of their debut album  Hybrid Theory.

“Chester and I would sit together, at a computer, typing stuff out, and then, print it out for us to sing in the studio,” Shinoda explains to SPIN. “Don would look at it, and he’d just shake his head. ‘No, no — that’s not it.’ And we were like, ‘Dude, you didn’t even fucking listen to us sing it!’ He’d go, ‘Look at the words. You can sing it to me if you want, but you can do better than that.’ We were so frustrated, but the thing was, he was right. But we were really trying, you know, and we weren’t hitting the mark, and we were mad.”

According to guitarist Brad Delson, the band’s frontmen were asked to revise the song’s chorus some 50 times. “It was kind of funny because it wasn’t happening to me,” Delson admits, “but Don was really holding Chester and Mike to a high standard on some of the unfinished vocals. I’m all about being in the studio, the process, and striving for greatness, so I thought that was awesome of Don. But for them, having to do it over and over … it was very, very painful for them.”

During that 50th writing session, Shinoda says “One Step Closer” became — in part — a song about the hard-to-please producer.

“We were doing the bridge and it had no lyrics on it yet,” Shinoda says. “We would write a bunch of things, shoot a bunch down ourselves, and then land on one we thought was cool, but we’d do it for Don, and he wouldn’t like it, which … it wasn’t a fun process. So, eventually, I think Chester suggested something that had the words ‘Shut up’ in it because he was directing them towards Don. I was like, ‘Dude, that’s great. What if it’s something like, ‘Shut up,’ though, and then, ‘Shut up when I’m talking to you?’ And he was like, ‘Oh that’s dope.’”

Confident, the two musicians headed back to the control room, and to Gilmore.

“Nobody was recording anything at the time, and he was just sitting there. So, we were like, ‘Hey, put up ‘One Step Closer.’ We want to do the bridge,’ and he was like, ‘Oh great, what’s the part?’ And we were like, ‘Just record it, and if you like it, you’ll know.’”

Bennington entered the recording booth. “The very first time he did it, we were just screaming — howling in the control room,” Shinoda recalls. “Everybody loved it, and Chester comes out smiling, and we’re all like, ‘What the fuck was that? How did that just come out of you right now?’ It sounded so great.”

That iconic track would get heavy radio play in the weeks leading up to the release of Hybrid Theory, which was released 20 years ago tomorrow, becoming the best-selling debut album of the 21st century; it has been certified platinum a dozen times.

Beyond its commercial success, Hybrid Theory would win Linkin Park its first Grammy, set the overall tone for hard rock for the next decade, and make Shinoda and Bennington, who died of suicide in 2017, recognizable faces.

Delson says that Linkin Park’s members knew at the time that the songs they wrote for Hybrid Theory — some dating back to 1996 when they were still known as Xero — “were great, because we loved them,” but had no idea the LP would be such a game-changer. “We fought to make this album and we had this early passion and traction from people we knew and some we were getting to know through the music, so we knew there was something special there,” Delson offers. “But in terms of the commercial trajectory, we had no clue.”

Before entering the studio in 1999 after inking a demo deal with Warner Bros., Linkin Park had spent years trying to get themselves signed. The band played countless label showcases, Shinoda says, and heard back from 20 labels they had sent their demo to.

“Nobody bit — everyone passed,” Shinoda says. Delson adds: “The band started in 1996, so we had basically spent a long-ass time trying to get a record deal and were turned down by virtually every label. So, we were super excited about getting to go into a real studio with a real producer. There was something magical that was visceral that was there, so it was really like, how do we not eff it up and how do we hone it so that the thing we hear in our head is the thing people hear when they play the CD?”

Linkin Park, Shinoda says, “snuck in the back door at Warner Bros. because a guy we’d been working with [named Jeff Blue] got an A&R job there. So, he brought us with him, and we got a demo deal to start developing the band — to see if they’d be interested in signing us. And the more songs we made and re-recorded, the more interested they got.”

However, Shinoda says that, while Hybrid Theory was being recorded, external forces tried meddling with the group, sticking their oars in whenever they could — including Blue, who allegedly tried to change the band’s entire makeup — right around the time they were recording their hit “In the End.”

“The feeling was, ‘If you have one shot to have a big single, this is the song,’” says Shinoda. “Everybody felt that way. The whole band loved that song. We had varying feelings about it being a single, but we all loved the song and thought it was going to do well.”

Shinoda says that Blue “took Chester aside at one point” to talk about Linkin Park and the work they had been doing on the record. “He said, ‘Man, we could just build a band around you,’” Shinoda says. “‘You could keep whichever of these guys you want to keep, just have your own band. You’re the star, I don’t know why we have these other guys around.’ And Chester, to his credit, came into the studio that day and goes, ‘Fucking guy is trying to kick you out of your band.’ And I’m like, ‘What do you mean? What did you say?’ And he goes, ‘I told him to go fuck himself.’”

For as much as he pushed them, Delson says Hybrid Theory wouldn’t have been the same record without Gilmore — who was later recruited to track their sophomore LP, 2003’s Meteora.

“It was a very intense process to make this record,” he says, “and it was a very stressful process, and what’s amazing — and really a tribute to Don, in addition to how well the record came out — is when we went to make our next record, we hired him, because we love the record we made and we really wanted to make sure the process remained sacred and protected. And he assured us he had learned a lot in making Hybrid Theory with us, and really honored that.”

Gilmore also guarded the band against external influences, including nosey record execs. “We were almost finished with the album, and I remember someone [from the label] came in and we played it for them, and they were like, ‘You know, I don’t know if this is as good as this song could sound,’ and they were getting ready to make suggestions,” Shinoda remembers. “You could see them start to go down that path. Don was like, ‘You know what? I hear you. I totally hear where you’re coming from and that’s such a good idea. Will you give me like 10 minutes, and I’ll make some adjustments, to see if its better?’”

Earlier this month, Linkin Park issued an expanded 20th-anniversary edition of their debut, boasting six discs of unreleased songs along with demos and alternate cuts. It also comes with three DVDs, art prints, and an 80-page book with ludes never-before-seen pictures.

“It was such a fun project to be involved with,” Shinoda says. “I would actually say it’s mostly due to the efforts of folks who have been around the band for a long time. The music on there is our music, and we’ve made a lot of demos available that many fans haven’t heard. Even the most hardcore fans have never heard a couple of these tracks.” “One of the cool things about this package is, everyone like scoured their basements or attics for like original, unique content — like fliers from shows and demos we passed out, standing in front of the Troubadour, trying to win fans one at a time,” Delson says. “We found a whole DVD’s worth of footage from 20 years ago, and so I was watching myself, back at that time, and just thinking, ‘That dude seems really young’ and it was a crazy roller coaster ride to be on, at any age — certainly when one is still becoming an adult.”

When asked if Linkin Park are working on new songs for their eighth studio record, Delson smiled widely — knowingly. “I think everything is open,” he explained. “Certainly, a lot is undefined, but I think the possibility is wide open.”