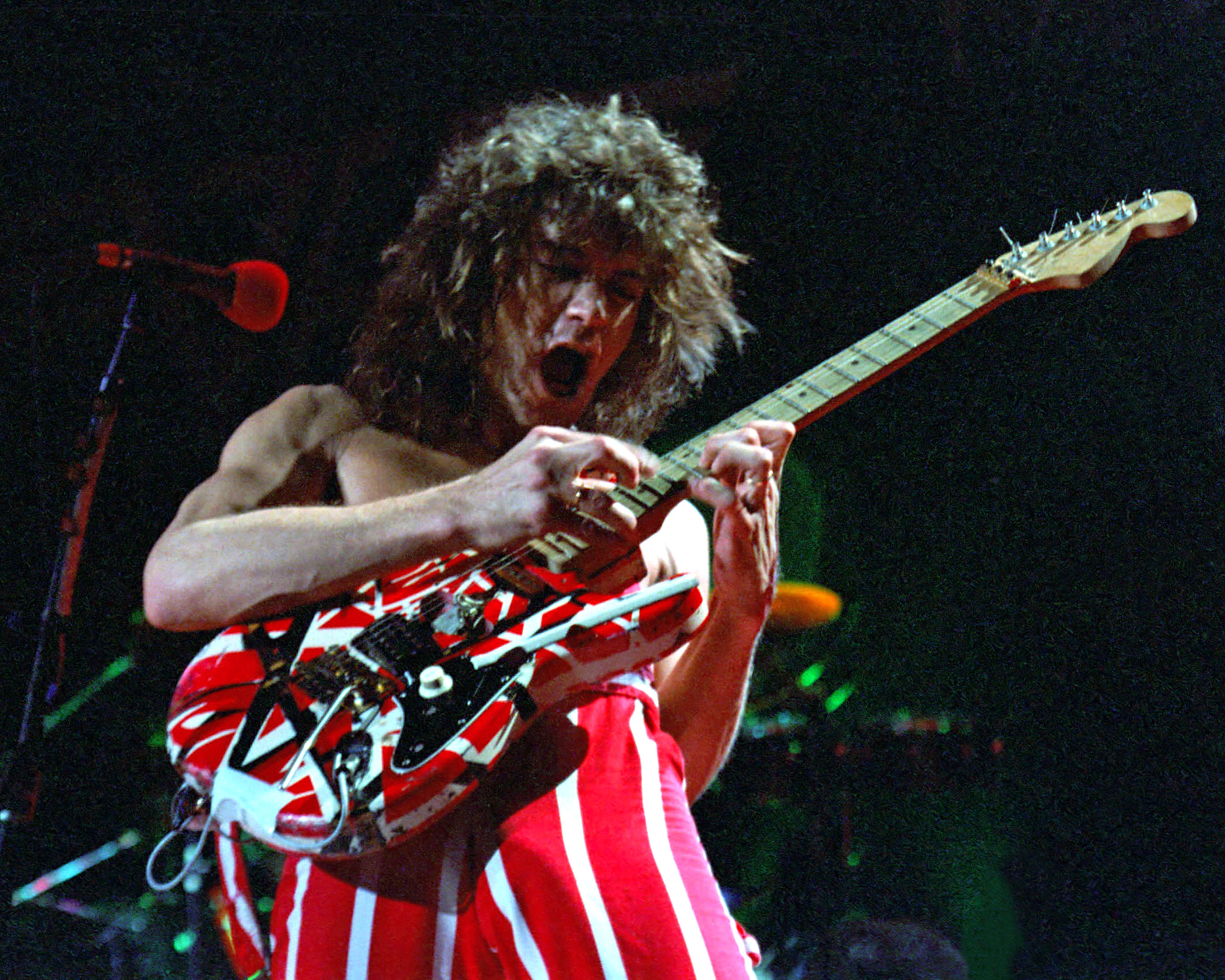 When the Van Halen brothers started playing music together in Pasadena in the 1960s, Alex played guitar with younger brother Eddie on drums and it was Alex’s growing prowess on drums that led them to switch instruments. From those humble beginnings, the duo formed their eponymous band with Eddie Van Halen becoming one of the most celebrated rock guitarists of all time.

Eddie Van Halen, who died on Tuesday at the age of 65, was the rare innovator who was equal parts showman and scientist, a notorious perfectionist who married his explosive displays of technique to irresistible pop songs and was more thrilling to watch than any stage pyrotechnics. In celebration of his remarkable career, here are Eddie Van Halen’s 10 best solos, with and without his band, and on and off the guitar.

One of the reasons we didn’t specify “guitar solos” in the headline is that Eddie Van Halen was a skilled multi-instrumentalist who wouldn’t limit his showmanship simply to the guitar. Although Van Halen, whose first instrument before taking up drums and guitar was piano, had subtly introduced synthesizers into the band’s repertoire on their two previous albums, synths had a grand coming-out party on 1984’s lead single “Jump,” the band’s first and only Billboard Hot 100 chart-topper. With the famous mile-wide grin that seemed to cross his face every time he played music, Eddie Van Halen got to show off on two instruments in the “Jump” video, reaffirming his status as a guitar hero before hopping to a keyboard to finish the song’s minute-long instrumental bridge with some fancy arpeggios.

By the time Van Halen released their debut album in 1978, punk rock had been positioned as an existential threat to the kind of good time blues-based boogie rock the band specialized in. But Van Halen seemed to rise to the challenge with songs like “Atomic Punk” that were as fast, loud, and rude as anything coming out of the New York and London punk scenes but didn’t play down the band’s formidable instrumental chops.

“She Blinded Me With Science” may have shared MTV airtime with Diver Down’s “(Oh) Pretty Woman” in the early ‘80s, but Thomas Dolby and Eddie Van Halen didn’t cross paths until a decade later. After the guitarist sought out the synth-pop pioneer’s help with studio equipment, he repaid the favor by playing on two songs on Dolby’s 1992 album Astronauts & Heretics, ripping a squealing solo on “Eastern Bloc,” a sequel to Dolby’s 1981 single “Europa and the Pirate Twins.” “He was hilarious, mercurial, brilliant, and had the most beautiful relaxed expression as his fingers flew over the fretboard,” Dolby tweeted on Tuesday. “I am privileged that he played on my album.”

Following David Lee Roth’s exit, Van Halen toned down its image during the Sammy Hagar era and often made more mature and earnest music. But the lead single for 1991’s For Unlawful Carnal Knowledge was somewhat of a return to the band’s bawdy roots. On “Poundcake,” Eddie Van Halen held up a power drill to his guitar pickups to create the unusual sounds on the intro and solo. The guitar solo’s unusual 10-bar structure rankled Alex Van Halen, as Eddie explained to Guitar World in 1996: “Al kept insisting that it wasn’t finished. He likes to count, and I never do. I’m strictly feel. I’m always screwing around with time, because I never count.”

The opening minute of “Everybody Wants Some!!” features some of the strangest and most guttural sounds that Eddie Van Halen every coaxed out of his guitar, which makes the way the song’s solo ascends higher and higher sound all the more triumphant. The 1985 teen comedy Better Off Dead memorably featured a sequence in which an animated cheeseburger sang “Everybody Wants Some!!” and shook the whammy bar on a tiny claymation facsimile of Eddie Van Halen’s famous red and white guitar, the Frankenstrat.

Eddie and Alex Van Halen were the only two consistent members throughout the band’s 48-year career, and in many ways, the brothers’ musical chemistry was its driving force. And they rarely sounded more in sync than on “Girl Gone Bad,” where Alex’s start-stop tom-tom fills lock in with the rapid runs of notes at the end of Eddie’s guitar solo.

Van Halen so dominated rock radio that they still hold the records for third-most number-one hits and third-most top 10 entries on Billboard’s Mainstream Rock chart, which didn’t even exist when the band released their first three hit-packed albums. The first Van Halen song to appear on the chart after it debuted in 1981, the lead single from Fair Warning, is one of the few David Lee Roth-era hits that has disappeared from radio airwaves in subsequent decades. But “So This Is Love?” is a swinging gem, with a guitar solo that Eddie Van Halen pulled together out of pieces of four different solos he’d previously written.

Michael Jackson didn’t particularly want to write a rock song when Quincy Jones suggested that Thriller needed something in the vein of The Knack’s “My Sharona.” But Jackson gamely wrote the tough guy anthem that became the album’s chart-topping third single, backed by members of Toto with Steve Lukather laying down the main guitar riff. But it was the decision to call in Eddie Van Halen for the climactic guitar solo that gave the song its hard rock credibility and helped it reach no. 14 on Billboard’s Mainstream Rock chart. Van Halen made some changes to the arrangement, played his solo in two takes on a borrowed amp, and never asked for any compensation for his work on the track. “It was 20 minutes of my life. I didn’t want anything for doing that,” Van Halen told Billboard in 2015.

David Lee Roth’s first stint with Van Halen went out with a bang with “Hot For Teacher,” the fourth and final single from 1984. The longest and most over-the-top music video of the band’s career featured child actors playing elementary school versions of each member of the band, and Brian Hitchcock played a young Eddie Van Halen with his own miniature Frankenstrat. But when it was time for the song’s show-stopping guitar solo, the real Eddie took his guitar for a walk down a long library table that’s as entertaining to watch as any of David Lee Roth’s broad comedic interludes.

Plenty of songs have been hits for two artists, but “You Really Got Me” has the rare distinction of two recordings that were each hugely influential on a generation of guitarists. When Dave Davies poked holes in his amp with a pin to create the groundbreaking distortion on the Kinks’ 1964 original, it was just about the heaviest riff anybody had ever heard. 14 years later, Eddie Van Halen upped the ante with the super-charged version on Van Halen’s self-titled debut album, presented as a 1-2 punch with “Eruption.” In 102 seconds, that iconic instrumental introduced finger tapping to a nation of rock guitarists who suddenly had a new idol.