From working his new book to fighting for social justice, one wonders how Jeff Tweedy has managed to record a new album during quarantine.

But his upcoming LP, Love is the King, proves this man can do anything. Teaming up with his sons, Spencer and Sammy, Tweedy recorded a song every day in April.

Tweedy friend and collaborator Cate Le Bon penned in an essay about the record. “Creativity/music was their comfort food,” Le Bon wrote. “Rather than directly addressing the significant disruption unfolding outside, Tweedy looked inwards and examined the matters that fear, separation and vulnerability pulled focus on.”

She added, “The initial impetus was to self-soothe as a family and shield in the comfort of creativity. However, on Love Is The King, Tweedy has balanced the books and penned a beautifully honest ode to love and hope. He has documented a time in history through the personal lens of shared human experience. There is solace here for all who need it.” 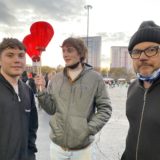 And today (Sept. 15), he’s shared the title track as well as “Guess Again” to give fans a sense of what this solo album will sound like.

Tweedy explained how the songs came to be in a statement:

“At the beginning of the lockdown I started writing country songs to console myself. Folk and country type forms being the shapes that come most easily to me in a comforting way. ‘Guess Again’ is a good example of the success I was having at pushing the world away, counting my blessings — taking stock in my good fortune to have love in my life. A few weeks later things began to sound like ‘Love Is The King’ — a little more frayed around the edges with a lot more fear creeping in. Still hopeful but definitely discovering the limits of my own ability to self soothe.”

Love is the King is slated to release digitally on Oct. 23 via dBpm Records. The release date for physical formats will be announced in the future. You can preorder your copy here.

Listen to “Guess Again” below.

Tweedy and the band will also be playing a drive-in show from McHenry, Ill., on Sept. 18, which will also stream live. Find out more about the show here.