After releasing numerous collaborations over the years, Health has curated those tracks into a new album, Disco4:: Part I.

Not only does it offer previously recorded collaborations with Soccer Mommy, Perturbator and JPEGMAFIA, it introduces three new tracks with 100 gecs, The Soft Moon and Brothel.

“In the past, each HEALTH LP has been accompanied by a corresponding remix record,” the band said in a statement. “This time, despite being called DISCO 4, in the interest of continuity, we offer you a collection of original collaborations with artists we admire. Also, FUCK 2020.”

Along with the album announcement, the Los Angeles band also shared the new track “Cyberpunk 2.0 2.0.” Going along with the above sentiments, the Zev Deans-directed visual initially feels like some far-off futuristic time. But as you watch the constant surveillance with mask-wearing people walking across the screen, the visual starts to emulate the world we’re living in today. 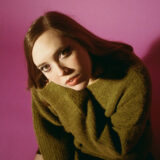 Disco4:: Part I follows Vol. 4:: Slaves of Fear, which released in early 2019, and a score for Grand Theft Auto Online: Arena War Official Soundtrack, which is the second time the band composed music for Rockstar Games.

Watch Health’s new video for “Cyberpunk 2.0 2.0.” The tracklist for their upcoming album is below.

Disco4:: Part I releases on Oct. 16 via Loma Vista Recordings. You can preorder the album and other Health merch here.