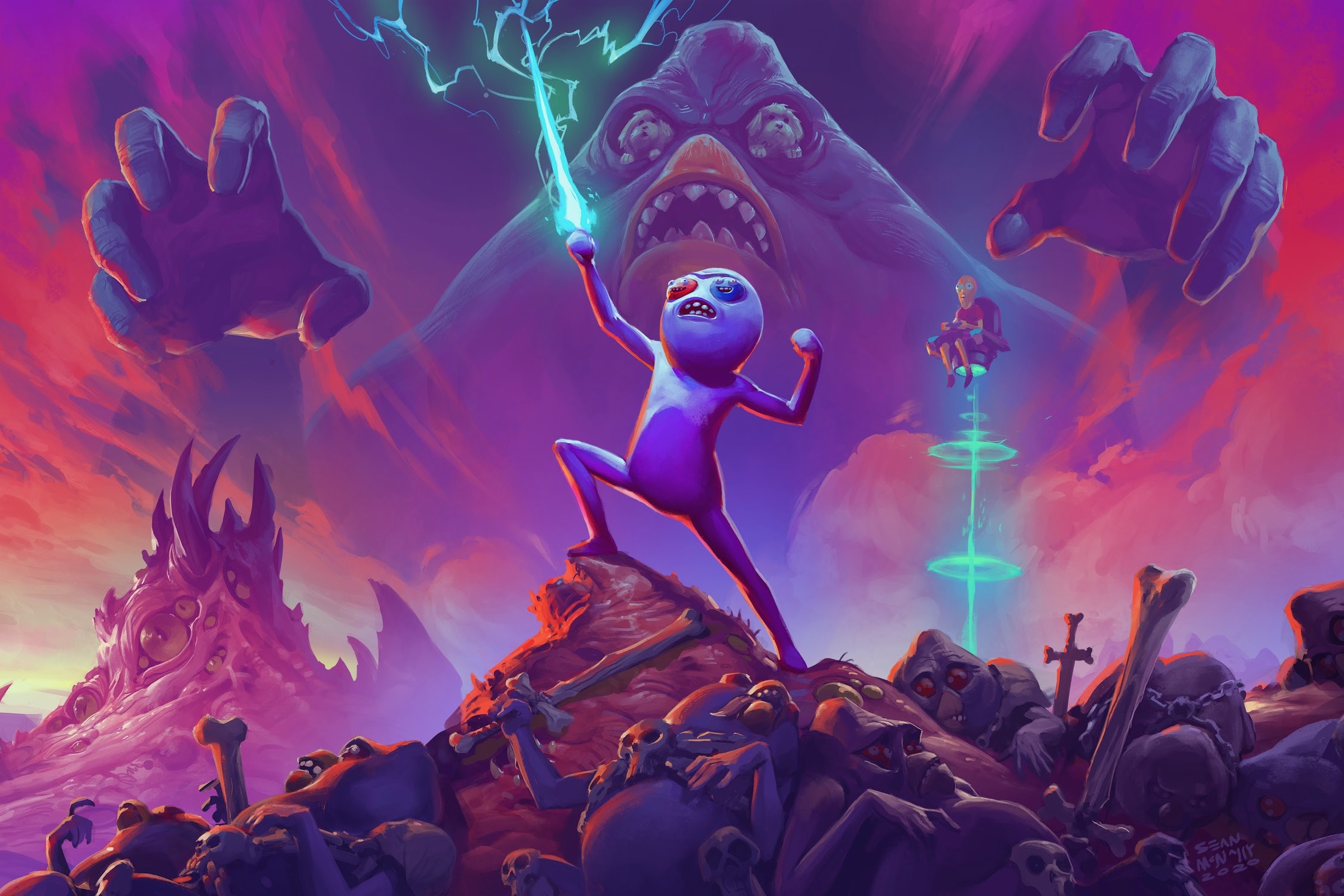 When Justin Roiland announced the launch of Squanch Games (originally proposed as Squanchtendo) in 2016, it wasn’t immediately clear how the co-creator and primary voice actor of Rick and Morty was going to transition into video games. After all, his unique brand of humor and writing style could clearly draw a pretty rabid fan base, but his only previous experience in the video game industry was voicing iconic characters like Rick Sanchez, Morty Smith, and Adventure Time’s Earl of Lemongrab.

That’s where CEO and co-founder Tanya Watson comes in. After working a variety of roles for gaming giants like Microsoft and Epic (on a small project called Fortnite), Watson had all of the industry know-how Roiland was missing. The duo put together a small team to put out the predictably-inappropriate and wildly hilarious VR adventure known as Accounting in 2016 (later released more widely as Accounting+) before setting their sights on a full-blown virtual reality game that could rival its flat-screened competitors and bring Roiland’s comedy to an even larger audience.

Squanch’s sophomore effort ended up being Trover Saves the Universe, an action-filled romp across various planets on a quest to save your dogs. Without spoiling anything, you and your purple friend (Trover) run into some issues along the way and things don’t go exactly as planned.

Long story short, Trover was so successful when both VR and flat versions launched on PlayStation and PC last summer that Squanch then released the game for Xbox and Nintendo Switch, which don’t even have VR capabilities (unless you count the weird cardboard thing for Switch that only supports a handful of titles).

Now that Trover is available on virtually every video game platform imaginable following the game’s Oculus Quest release in June, we caught up with Watson to talk about launching Squanch with Roiland, VR games, and her career in the industry.

SPIN: What has it been like being the one responsible for making sure Justin Roiland’s humor translates through video games as well as it does on TV?
Tanya Watson: It’s probably not surprising, but it’s been a lot of fun. One of the reasons that I wanted to start this studio with Justin was to build something totally unique and with a fresh perspective — which has been all of the adjectives: exhilarating, alarming, surprising, exciting. But it has also had its challenges since we needed to build the studio from the ground up to support Justin’s voice, both literally and figuratively. Everything from the people to the process to the pipeline was built around his style of comedy, and we’ve tried to suit it towards how he prefers to work. In that way, we’ve been able to take advantage of some of the secrets of the animation and television trade and apply them to games.

How different is it to create a game that works for both a VR audience as well as on a flat-screen?
TW: From the beginning, we were focused on the pure VR experience. It was super important that Trover Saves the Universe was a full-fledged game, and one that people could play from start to finish without feeling queasy. We started by focusing on the elements that could make the player sick — camera motion, player movement — and getting the gameplay right with that while Justin developed the narrative.

We realized from testing outside the headset that the game totally worked as a traditional experience as well, because it’s essentially a single-player co-op game. You play as “yourself” while controlling Trover, and we found it was just as enjoyable outside of VR as in.

Once we pulled the trigger on the traditional version, we focused on the elements that made it a better experience for flatscreens. In particular, how to focus the player’s attention on scenes — by having auto-zoom — and ensuring the [user interface] worked with keyboards and a mouse. We also completely redid the controls with a lot of attention paid to the way someone who was using a keyboard and mouse would want to move through the world.

What are some of the pros and cons of being able to do your own thing with Squanch compared to your previous roles as part of a huge corporation?
TW: The biggest pro and con is that there is no box. When you’re in a massive organization, one of the first things that you should do is figure out what the box is. What do people respond well to in the organization? Who are the people who “get things done”? What kind of standards and style of work does the company expect? Some corporations have bigger boxes than others.

When you’re starting a company, you’re building the box. You get to determine what type of culture you want, who to hire in order to support your vision, how you identify the right kind of talent to support your projects, and how to establish the foundations of the company. By your every action, you’re establishing all of those guides for your employees, both current and future.

I know that’s a general answer, so a more specific pro and con is risk-taking. A smaller team can take bigger risks because there is less overhead on the line. Squanch was founded almost exclusively to take risks that other companies may not be willing to take — which goes back to why I wanted to build it with Justin.

As someone who’s had several different roles within the gaming industry, what don’t people realize about making a career out of video games?
TW: Not surprising, but just because we work in games — making fun things — it’s still a job. My first game job was working on a hockey game, and I had never played hockey [nor do I] particularly have an affinity for sports titles. I did it because I wanted a foot in the door, and it didn’t matter if it was hockey or a snot-shooting gallery.

Flexibility is probably the number one skill you can have working in this business because things are changing constantly. The technology, the projects you’re working on, that design idea that you thought was amazing and perfect and would never fail… that failed. You have to be able to roll with the punches, and if you don’t, you could get frustrated fast.