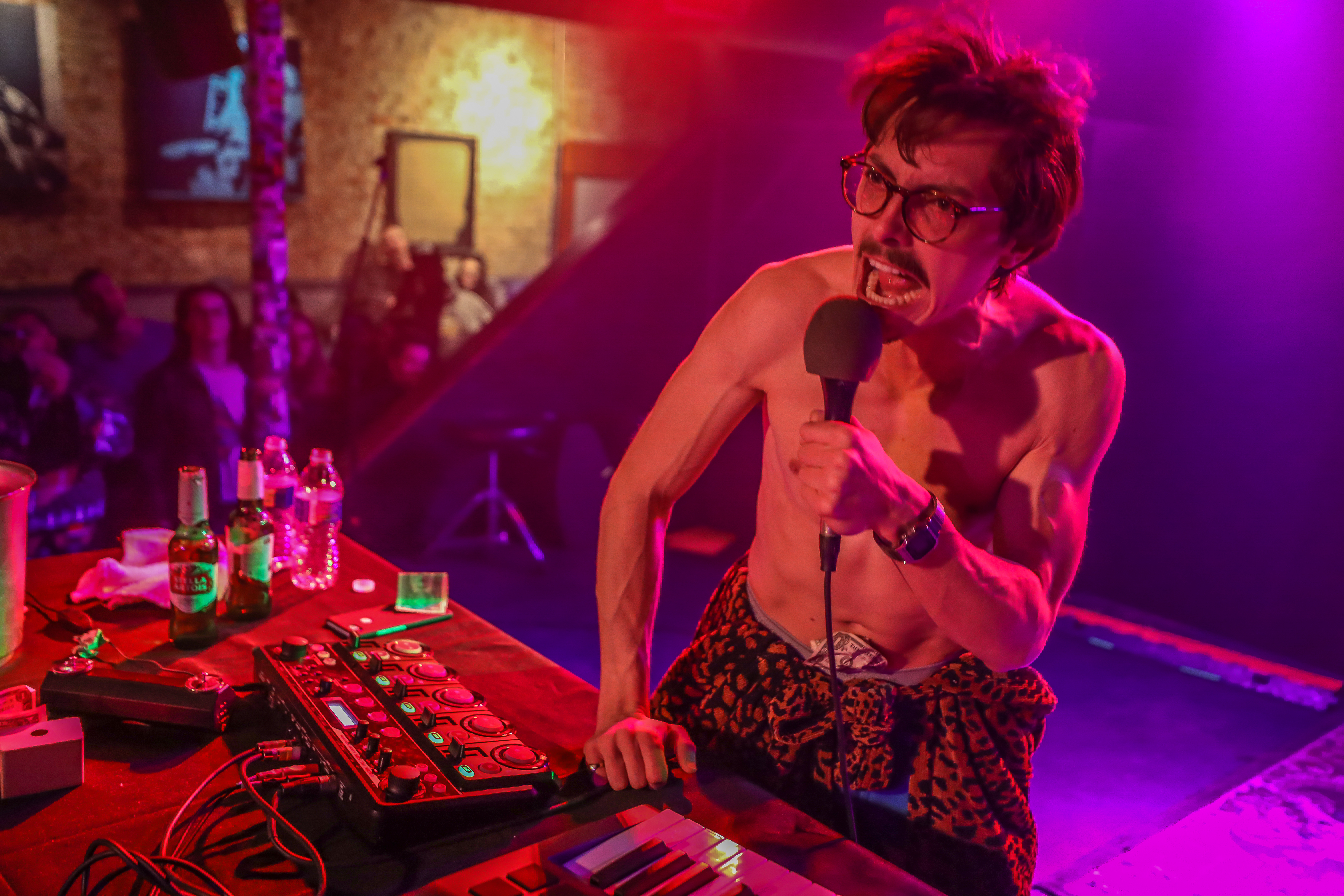 Both via simulcast live-stream and on stage, the 31-year-old Dallas native improvises songs based on conversations with his audience. Topics include but are not limited to “big booty” and “mushroom trip.”

“Generally, I find songs having to do with ass or fucking do quite well,” Rebillet tells SPIN over the phone from his Manhattan apartment.

With or without suggestion or approbation, he’d still be belting odes to ass and trying to find a “cure for depression” via music. Rebillet has been improvising hyper-sexual and hilarious songs since 2016. He’s an often horny, less cerebral disciple of Reggie Watts. While doing body rolls, caressing his chest, and visually undressing the camera (or audience), he flexes his musical chops. Though classically trained on piano, his inspirations range from Marilyn Manson and Howlin’ Wolf to Madlib and J Dilla. The samples utilized by the latter pair spoke to his love of funk and soul music, which was originally instilled by his mother. With a MIDI controller, a loop station, and a computer, he makes impressive instrumentals that pull from funk and soul, hip-hop, R&B, house, electronic, and more Black music. If Hall & Oates were one human (with a thinner mustache) who’d grown up on the internet and listened to Flying Lotus, you might have Rebillet.

Rebillet’s life began in Dallas’s Greenway Parks neighborhood. As he learned piano and started acting, the family traveled to Atlanta and New Jersey for his dad’s executive work in the fashion industry. After dropping out of the acting program Southern Methodist University, he spent a decade jumping between jobs—maître d, executive assistant, call center operator for online hunting and boating certification—while trying to make beats. Under the name leae, he released several projects indebted to the electronic, hip-hop hybrids coming out of LA’s beat scene and worked with rappers, including rising Philly rapper lojii.

When Rebillet discovered Reggie Watts, he became “enamored with the concept of getting up on stage with absolutely no plan” and started making videos on YouTube. The loss of his job at the call center in 2017 pushed him to get live gigs, and he worked until he had three popular residencies in Dallas. When he hit 20,000 YouTube subscribers in 2018, Rebillet moved to New York City. Things were slow at first, but then thousands of people began sharing his work on Facebook and upvoting it on Reddit. Before long, he was getting booked for gigs around the world.

Today, the self-professed “tech and internet nerd” has millions of fans and subscribers across Facebook (his biggest platform), YouTube, Twitch, Instagram, Twitter, Reddit, and TikTok. He’s also played sold-out shows around the world for the last year or two. When the pandemic hit threatened to end his 2020 tour plans, Rebillet and his team organized safe, socially-distanced concerts at drive-in movie theatres that were fiscally and emotionally rewarding.

“Every show was unique and special. I hope that people felt it as much as I did. We did a lot to make sure that there were points within the show where you were interacting with me, and you knew that I was there,” Rebillet says. “It went so fucking well. No one’s sick… We did what we set out to do.” “I think there’s a huge overlap [between comedy and horniness], especially in my songs. I’m hoping that I can make you laugh and turn you on, indistinguishable from one another,” Rebillet explains. “That’s sort of how I’m feeling when I’m making the songs. I’m feeling like, ’This is fucking absurd, but I’m also feeling myself.”

Recently, Rebillet discovered that Erykah Badu was a fan. A fellow Dallasite and alumnus of Booker T. Washington High School for the Performing and Visual Arts, Badu expressed her appreciation for Rebillet’s work and said she wanted to come on stage. Clips of their collaboration at his Dallas drive-in show went viral. Their collective joy and silliness is endearing from the first note. Their screams feel like all those you’ve been holding in since March.

“When she got into my little tent that I performed in, that was the first time we had ever locked eyes or said a word to each other [in person]. What you see in that video is just us figuring each other out,” Rebillet says. “It was one of the highlights of my life.”

Though currently on a brief sabbatical from his weekly streams, Rebillet’s schedule remains full of highlights. He’ll be performing a live set for Badu’s streaming platform and may start acting again. At the top of the list, though, he’s working on a proper album.

‘“It will be a composed and produced album,” Rebillet says. “I’m sure there will be everything [on there] from ass to death.”